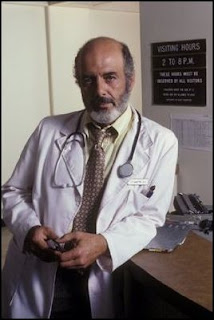 I just hate making these kinds of posts. I was so saddened last night when I read that Pernell Roberts, who I just adored on Trapper John M.D., has passed away at the age of 81.

Fans will remember him best as Adam Cartwright, the oldest (and hottest) brother on Bonanza, but to me he will always be good ol’ Trap. I just recently reacquainted myself with Trapper John on the American Life Network. One of my favorite bits was how Trap and Gonzo would get each other to do what they wanted by using copious amounts of reverse psychology. It was a fun ongoing writers’ quirk and it made the show that much more entertaining.

Trapper John M.D. was an interesting spin-off from MASH, featuring Trap as the chief of surgery at a large San Francisco hospital approximately 30 years after the Korean War! It was a fairly lighthearted show, much like its predecessor except it was done in the hour long format, sans laugh track. Still, there were plenty of poignant moments nestled amongst the silly ones. 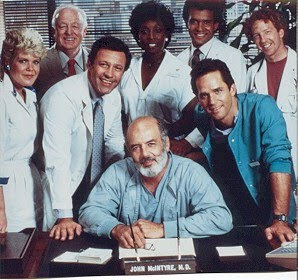 Pernell retired from the small screen in 1997 after appearing in an episode of Diagnosis: Murder. I had wondered off and on over the years what he had been up to and I truly hope he enjoyed his retirement. Pernell had a wonderful career, having conquered not only the small screen but also the New York stage. He acted in several plays and in 1956 he even won the Drama Desk Award for his portrayal of Macbeth! Here’s a nice look back at Pernell’s career courtesy of Playbill. And check out these articles on Pernell from an awesome blog called Better Living Through Television (which goes without saying!).

My heart goes out to Pernell's family and friends. I read a comment from a fan online that said they hoped Pernell had joined his Cartwright clan somewhere in the beyond and that they were all riding horseback together. I just love the idea of that.

I was so sad to read that too. He was my favorite Cartwright and you're so right, the handsomest. I loved it when Adam came into the situation. I never saw Trapper John M.D now I will have to take a look. Thank you for this sweet post.

Awww, thanks for the sweet comment. I've been rewatching a lot of the Trapper Johns. He was truly a wonderful actor and I miss him so much...