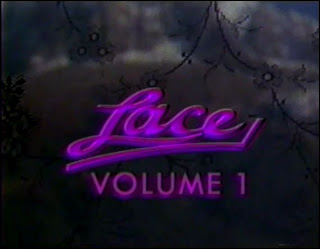 Oh what a twisted and, uh, lacy, web we weave when at first we practice to deceive. Ummm, yeah. Lace was one of those awesome mini-series that was full of sudsy excess, and partially responsible for making the 80s so friggin’ memorable. We’ve got beautiful woman, studly dudes, a very bitchy Phoebe Cates, an epic tale that spans decades, exotic locales and so much save-the-drama-for-your-mama-over-the-top-emotional-overload, that it was destined to become a classic. 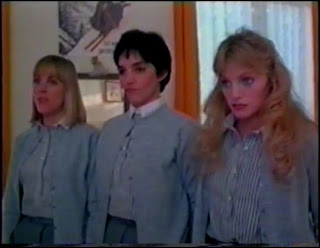 We are, how you say, sluts...
The movie begins in the 60s and features three lovely tarts-in-the-making who are best friends at a boarding school in the Alps. We’ve got Pagan (Brooke Adams) who is this semi-comuppity British chick, there’s Maxine (Arielle Dombasle) a beautiful French girl who resembles Jenny Wright from Near Dark and Judy (Bess Armstrong in that famous pageboy she’s had for a zillion and a half years), the smart American girl. Each one loses their virginity around the same time and guess what? One ends up with a bun in the oven. So the trio vow to have it together, give it up together and then fetch the child when one of them can get into a better situation and raise it properly. The first half of the movie basically sets up the mystery of who the mother could be and then after the unnamed vixen gives birth, we follow the three girls as they separate and pursue their own dreams. The child is named Elizabeth Lace and the mother is put on record as Lucinda Lace (harkening back to a romance novel the three women loved). 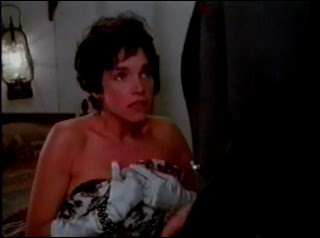 Oh Pagan, you know you want it...
Well, life is just too damn good for these women - Pagan has an on-again-off-again romance with a middle eastern prince, Maxine marries this hot guy who has an incredible house, and then she has her own kid (or another kid, depending on your opinion at this point), and Judy goes to Viet Nam to report on the war, decides it sucks and then starts a magazine called Lace. They all keep coming up with excuses for leaving Elizabeth where she is and then one day they get the (wrong) information that she’s been killed. Of course, everyone feels all bad and stuff, but eventually they resume their lives pretty much as normal. Eventually means, like, five minutes later, but with some offset resentment and stuff (for the drama, dig?)... Then this wickedly bitter porn star turned A List actress named Lili (Cates, slinging an indistinguishable Euor-trash accent) shows up and begins to assimilate herself into their lives, in the most cold and cruel ways. She seduces Maxine’s son (or her own brother, depending on you opinion at this point... Yikes!), hurls Pagan back into the prince’s life only to jerk him away and, well, she gives Judy a pretty awesome interview for Lace. Well, that’ll teach her! Finally, she brings the three now-distant friends together and asks them, “Which one of you bitches is my mother?”

My friends, history has been made. 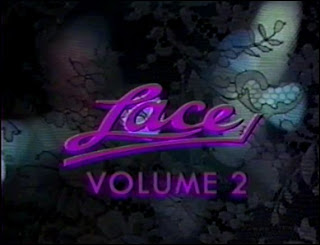 And now we can move on to… Lace: Volume II

Volume II continues exactly where the “which one of you bitches is my mother?” part leaves off. Again we track back through everyone’s life (although at this point Lili’s story is mostly done with dialog and less with flashbacks) and then there’s the money shot. You mean, she’s your mom?!? OK, I didn’t guess it at first, but right before the reveal, it does become fairly obvious. 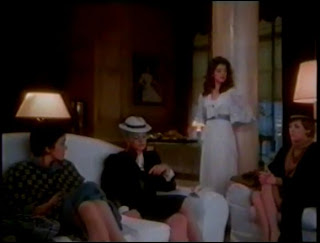 "Wheech one of you beetches ees my muther?"
Volume II isn’t quite as much fun because at this point you’re just waiting around for whatever the revelation may be, but it’s a decent ending to the bang up, lush soapy extravaganza of Volume I. Bess Armstrong is terrific here as Judy and my favorite of the three girls. As a war correspondent she sucks, but she ends up writing a book called Rape in a Foxhole, which I’m simply dying to read! I think they spend a bit too much time on Pagan and her prince saga, but the locales are simply delish and of course Brooke Adams is in top form, especially at the beginning of her romance, before she hits the frumpy route. Now Phoebe Cates is another story. She’s simply breathtaking to look at but seems so lost in the role, not even a GPS could lead her to right side of her character. She’s so hilariously indignant! Nothing pleases her and as she emotes from one bitch session to the next, she’s just like taffeta gone mad. And I loved her! 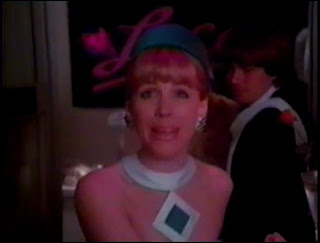 This is Judy apparently going undercover as an airline stewardess
This mini-series was popular enough to warrant a sequel, aptly titled Lace II (but maybe it should have been Lace II: Volume I or Lace: Volume III or… oh, I’m so confused!)… In the sequel (which I have not seen... yet) Lili goes looking for her father! I mean, we kind of know who he is, right? Guess again...

Lace starts off strong, stays engrossing through the first three hours and then wanes into something slightly less engaging (not counting Cates’ ill advised bitch moments), before heading into the world of nothingness. It was a nice ride though, and of course being the glutton for 80s excess that I am, I’d take that trip again any day!

A Gallery of Bitch: 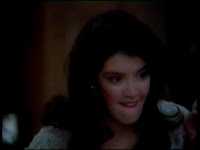 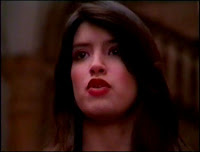 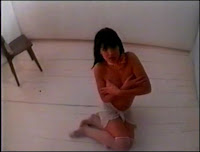 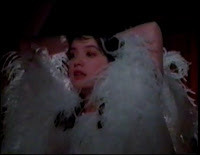 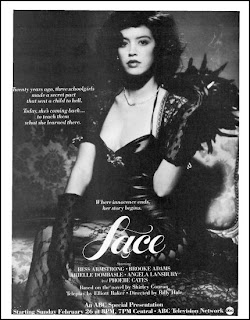 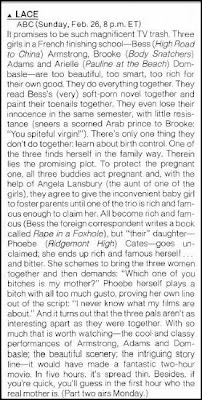 I really need to see this again. It's been forever!

What the hell?! I was just thinking about this the other day, visit the site and get hit with
80s TV memories! God, that "Which one of you..." line was great. 'Bout the only thing from Lace I can remember.

When the mother takes slow steps up the stairs to Lilli's room, we only see some legs and black shoes. Watch some scenes before that, when the three friends are in Lilli's room: all three of them wear the same shoes!!!

Always loved the excess of this mini-series. Eventually read the novel upon which it is (loosely) based. Surprise, surprise...the book is better!

I remember this mini series but which one is the natural mother?