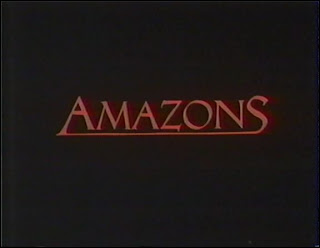 Let’s face it, that Peter Scolari is cute as a button. He is! Amazons caught him somewhere between establishing himself as a great comedic actor on Bosom Buddies and finding Emmy accolades on Newhart (he was nominated three times!). Always a breath of fresh air, I think Peter is one of the greats… and awful nice to look at too! 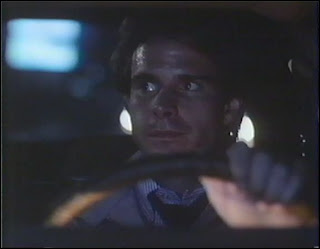 See, he's even cute when he drives!
He has a short but fun part in Amazons. In fact, the role was small enough, I was sure it had come out before Bosom Buddies, but alas, this was a whole two years after the end of that short lived and incredibly awesome show. He plays Dr. Jerry Menzies in Amazons and finds himself “bosom buddies” (or so he hopes!) with the gorgeous new doctor named Sharon Fields (Madeline Stowe). She’s one of those nose-to-the-grindstone chicks (and says so herself!), with only the job on her mind. One of her first cases is a simple appendectomy but something goes horribly wrong and after a major freak out the patient (who just happens to be a bigwig senator) runs into an oncoming ambulance and goes splat.. Yikes! A gruff but hot detective is assigned to investigate. Lieutenant Tony Monaco (Jack Scalia) is obviously smitten with Sharon so he entertains these crazy notions she has that one of the female higher ups at the hospital, Dr. Diane Cosgrove (Jennifer Warren) has established something called Stallion Kill and is hell bent on getting rid of certain male big shots. And just who are all those six foot tall female employees who look like models and kick ass like Bruce Lee? Eventually Sharon and Tony find that there is a secret movement of Amazonian descendants who are trying to reclaim what they feel was stolen from them. They even have a school for Amazon in training tykes! 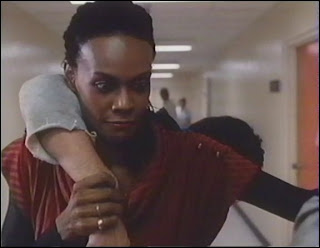 This is called ass kicking
Wow. They certainly don’t make them like this anymore. Amazons is told without one ounce of humor. That’s a bold decision, considering the material. This was Paul Michael Glaser’s first directing job (yup, Starsky made a movie! He’s actually a pretty successful director) and he employed the great Dean Cundey (Halloween, Roller Boogie, The Fog and oodles more) as the director of photography. The look of the film is fantastic. There are many beautiful, flowing and artistic shots and it pushes the film and helps keep it moving. I liked the way they chose to present this film because the women come off as sexy and cool and not overtly angry or annoying. Tamara Dobson from Cleopatra Jones plays one of the Amazons, and she steals every scene. If ever there was a woman perfect for the role of of an Amazon, it was Tamara. Also, Jennifer Warren’s character is thoughtful and caring; she adds a sympathetic element to the clandestine operation. She’s intent on taking over, but believes all women, not just the Amazons, should look out for each other. This creates quite a riff with the other girls when she tries to spare Sharon. 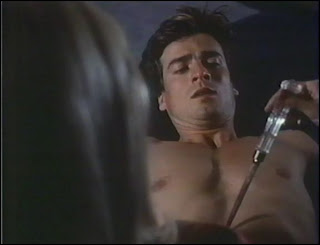 Making babies with Amazons is dangerous
Amazons is an odd film. I don’t think everyone would enjoy it because it is so openly serious. There’s no sense of irony here and it was obviously a labor of love for Glaser and Cundey. This is one of those movies that will probably find most of its audience with the already established group of TV movies fans (all four of us!), who appreciate the difficulty of making wild, over the top movies into something of mass appeal. I think this one falls a little short of the mass appeal, but remains charming all the same. 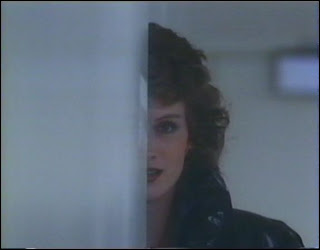 Quite possibly one of the greatest shots in a TVM

A little humour might have helped this, yeah. It's also a little (a little?) reactionary if you think about it, given that one of the Amazon descendants - not ancestors; ancestors come first, not last - is the running mate of a Presidential candidate, and this movie aired the year Mondale and Ferraro were going for the White House. But I'd love it if FSM or Intrada or some other such label could put out this TV movie's score by the late great Basil Poledouris.

(Incidentally, I can understand why all the Amazons here have two breasts instead of one, as they traditionally had - one was removed so it would be easier for them to draw their weapons without interference, suggesting that Milla Jovovich would be more useful in battle than, say, Christina Hendricks - but if the Amazons were all wiped out and as they tended not to have anything to do with men, how did they have descendants in the first place? Okay, maybe I'm being too critical... co-story credit does, after all, go to one of the writers of Jaws 3-D!)

Whoops! I changed it to descendants. Thanks for pointing that out. I guess I was too busy thinking about Peter Scolari! :)

Here they say when they captured men they would have sex for the sole purpose of making babies, and I don't know NEARLY as much about Amazons as you, so I totally bought it. And I had no idea one of the writers penned Jaws 3, which I adore! I was so caught up in the photography, I didn't poke around the other credits! Thanks for the info!

Like your review. Any idea where I can get a copy of this Tv movie ?

The scene with the Amazon fighting ritual, and the scene where Dr. Cosgrove stroked the metal knife across that "man"'s chest as she was telling him about the legend of the Amazons, were very strong scenes. Loved them both!