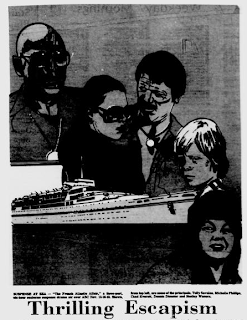 Ah, it feels so good to get back to this segment!

I have not seen the French Atlantic Affair, which originally aired on ABC on November 15th, 16th and 18th in 1979. Based on the novel by Ernest Lehman, which was published in 1977, the story revolves around crazy Father Donleavy (Telly Savalas) who runs the Church of the Cosmic Path (best named "church" ever? I think so). The Cosmic Path cult infiltrates a Love Boat like cruiser, and it's up to Harold Columbine (Chad Everett) and other awesome TV-movie-friendly faces to save the day! That sounds like three nights of awesomeness, yes?


Here are a couple of newspaper promo stills: 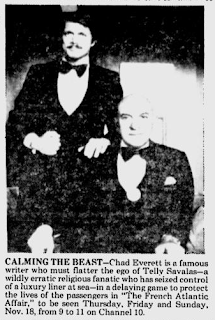 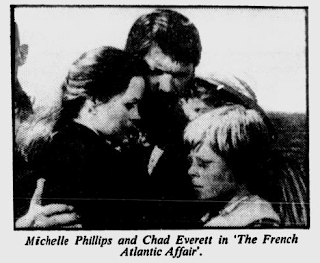 The rest of the cast includes such wonderful actors as James Coco, Carolyn Jones, Richard Jordan, Donald Pleasance and much, much more! Warner Archives recently released the mini-series on DVD! Oh. Yes.

I want to thank Matt aka Billy Witch Doctor, for the scans from TV Guide, which I posted below. This artwork was done by Bob Peak, who did a lot of great work for the magazine. Bob posted some of his covers on his website, so stop by and tell 'em Amanda By Night sent ya! And thanks again Matt for the awesome scans. 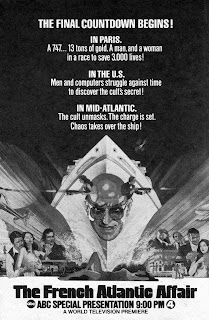 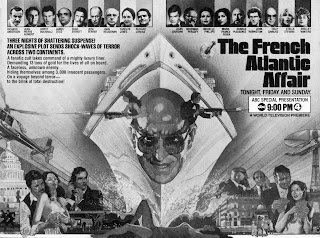 Aaaaannnnnddddd, after all of that, here is the original TV promo. It also features some clips from 240-Robert, which I'm sad to say I was completely unfamiliar with until about two weeks ago. Where was I in 1979? Not where I should have been, I'll tell you that much!

Update 5/12/14: Ugh. The promo has been removed, but Warner Archives posted this fun Preview Clip: