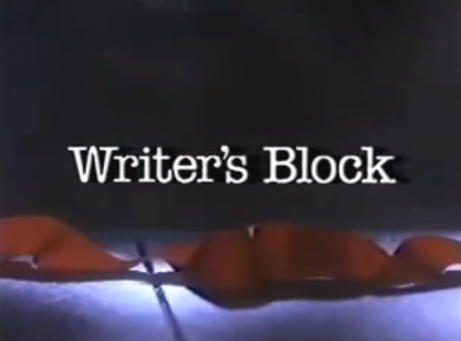 Looking back at the original reviews for this 1991 USA thriller, I am amazed at how journalists felt that creating a serial killer character that everyone adores is patently bad writing. I guess someone should tell Dexter that no one likes him (or rather liked, as I hear the series ended with a lot of issues). I am also somewhat surprised by the general lack of good humor that should accompany any review about a movie where the protagonist is named Magenta Hart. C'mon people!

I should probably say this general antagonism is targeted at one writer who worked for the Associated Press. His negative review ended up in a gazillion papers and probably turned a few heads away from this admittedly flawed but interesting thriller. Morgan Fairchild is Magenta, a put upon novelist whose most popular creation is a series of novels that feature a nameless serial killer that is referred to as The Red Ribbon Killer. Magneta is a bitter divorcee who uses her pen to strike down her ex’s current fiancé, another blonde who the Red Ribbon Killer fixates on, killing her over and over again in this series of books. As cathartic as this would seem for Magenta, it has also unfortunately triggered a real life murderer who is now duplicating the crimes, and moving closer and closer towards our favorite button-nosed author.

Writer’s Block smacks of 1991. It’s dreamy, not completely coherent and offers up a female protagonist whose sexual repression sparks a series of calamitous events. If anyone can’t see the metaphors that are flying around the set, they must have truly hated television the 1990s. For instance, the author's name, Magenta Hart, is meant to symbolize the purple heart, or rather, the wounds of love! I mean... you all got that, right? Get with it Associated Press! (OK, I’ll stop here)

I normally associate Fairchild with her bitch-tastic performances from The Initiation of Sarah, Paper Dolls and her narcissistic turn as Mindy’s unwanted BFF Susan on Mork and Mindy. She is perhaps a little too good at playing bad, and I tend to forget she also played nicer and sometimes weaker characters (I’m looking at you, Seduction). Despite Magenta’s Jackie-Collins-heroine-like moniker, this character embodies nothing of those similarly named protagonists who are never shy of witty retorts, or lovers for that matter. Beautiful but beleaguered, Fairchild is good in the role of the pretty girl who has a hard time keeping the guy. She is assisted by the forever likeable Joe Regalbuto, who at the time was making a name for himself as Frank Fontaine on Murphy Brown (non-sequitur: I miss Jim Dial). She also has a mysterious lover named Andrew (Michael Praed from Dynasty) who is every inch the romantic hero Magneta needs… or is he? Suspense, people. Suspense.

While I enjoyed Writer’s Block, I will admit that the last 15 minutes got strange, even for me! And while I was fine with the surreal atmosphere, the rest of the film’s more realistic tone (well, realistic by early 90s sex thriller standards) offsets the twist. It’s a minor quibble though. I thought the moody lighting, noir-ish pacing and Fairchild’s perfect blonde hair were enough to keep me engaged. If I could go back in time and write a letter to the editor... OK, now I'm really going to let it go! 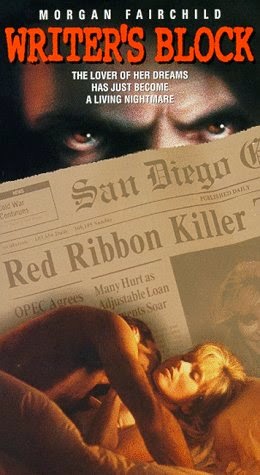 I enjoyed reading your review of "Writer's Block". I remembered seeing this tv movie when it first premiered on the USA Network back in 1991 and I missed the first few minutes, and it wasn't until a few years ago that I finally had the chance to see it again when I ordered it on VHS through Amazon. Anyway, I too, enjoyed this tv movie, to some extent. As you so eloquently pointed out, the surreal and nourish pacing was interesting, and yet, it was also nonsensical as well. Specifically, every time Morgan Fairchild's character wrote a murder scene in her new book, an actual murder of a woman was taking place at the EXACT SAME TIME!!!! Talk about a stretch! LOL!

I look forward to reading more of your articles. Keep the great work!

Thanks for this nice comment, and it's always nice to find another USA Original viewer! :) Writer's Block is definitely fun if you can suspend disbelief, but yes... there's a lot of disbelief to suspend! :)

Hope you enjoy your stay here at MFTVM! Take care!