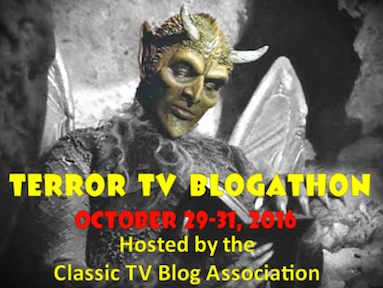 Just in time for Halloween, this post was part of the Terror TV Blogathon hosted by the Classic TV Blog Association. There are tons of creepy reads ahead, so check out what's scary to others in the association by clicking here. Oh, and enjoy! Let's roll... 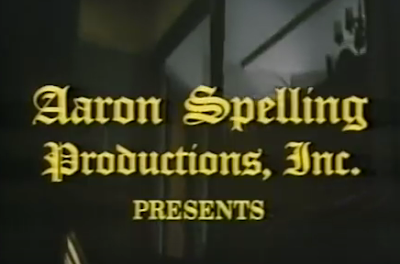 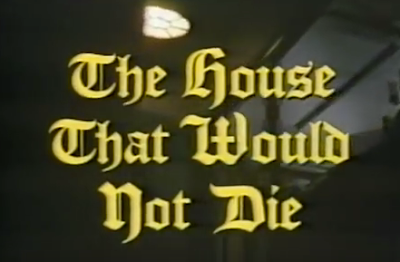 Although it has been many years since I read Barbara Michael’s excellent Ammie, Come Home, which The House that Would Not Die (aka The House that Wouldn't Die) is based on, I remember it as a chilling and fascinating novel. Michaels, whose real name was Barbara Mertz, earned a PhD in Egyptology from the University of Chicago before becoming a best selling author, writing under the names of Michaels, and Elizabeth Peters. As Michaels, she often dove into Gothic ghost stories, brilliantly weaving her knowledge of the research process she had developed while acquiring her doctorate, incorporating the fascinating “brick and mortar” historical interrogation methods into the mystery solving her characters engaged in. The ABC Movie of the Week adaptation, written by Henry Farrell (a fellow novelist who also penned the screenplay for the excellent TVM The Eyes of Charles Sand) somehow manages to maintain some of the authenticity of that process while also indulging in the many supernatural thrills that made the novel so compelling.


A look at a similar(ish) color scheme used in the TVM's foreign artwork and a later release of the novel: 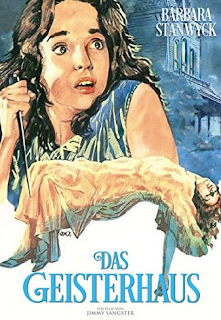 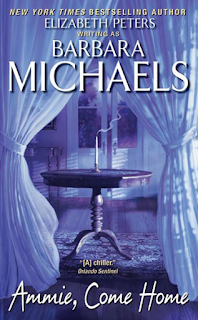 Barbara Stanwyck makes her telefilm debut as Ruth Bennett, an elegant and independent woman who inherits a beautiful but remote house from a distant relative. Taking her lovely niece, Sara (Kitty Winn) along for the ride, the duo decides to set up house for a bit, but soon find out something is already living there. 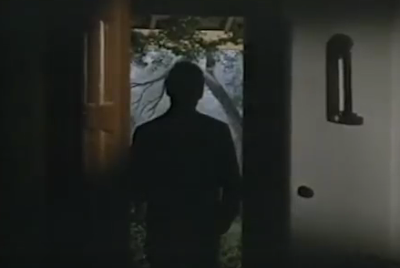 That’s the basic premise of this simple but suspenseful ghost tale that also interweaves some charming romance elements (along with a few rapey ones, but we’ll get to that) for Ruth, and a professor named Pat (Richard Egan, also making his TV movie debut), as well as for Sara with a cutie pie named Stan (Michael Anderson Jr., and his moustache). Following the original storyline beats of Ammie, House kicks of quickly with a nifty séance, before embarking on a slow burn film about possession, lost love, and grief, leading to a surprisingly moving ending. 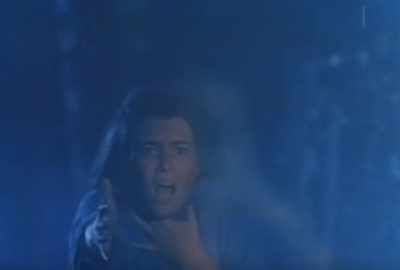 The hauntings, which are classic even by the standards of 1970, begin early on, as a male voice cries “Ammie, come home,” in the wee hours of the night. Soon after, Sara takes a peculiar turn, becoming terrified of Pat, who is also acting curiously, and sometimes violently when inside the house. Based on my memory, the novel and film depart mostly in terms of the location. Ammie takes place in the busy and stately D.C. neighborhood of Georgetown, where the neighbors are literally yards away from the chaos. House is out in the middle of no man’s land, where help isn’t simply a scream away, feeding into a real sense of seclusion. While the more urban setting of Ammie works wonderfully in the novel, I really like the isolated locale in House. 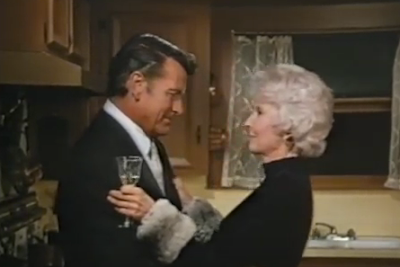 Like most telefilms, House is not overtly violent, but manages to bring on the creep factor in several scenes. One of the most jaw dropping ones occurs relatively early when Pat forces himself on Ruth. It is an uncomfortable moment meant to express that Pat is no longer himself, but it does tap into some very real fears of that pushy date you dread but have probably encountered. Ruth somehow manages to forgive Pat, and that he is being taken over by a spirit helps the audience also come back to loving him, but that scene still stands out as a realistically terrifying moment. 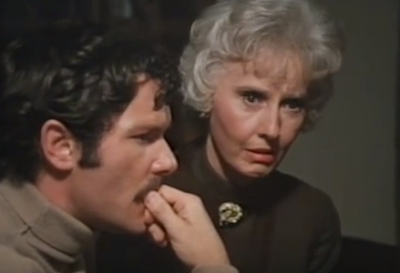 And, House has atmosphere to spare. Going back to the location, the howling winds that rattle around the house give the film a sense of unease. The séance is, like all séances are in my opinion, awesome, and Winn is excellent as the possessed victim. There are a few supporting characters, but House relies heavily on the four leads to carry the film. Stanwyck and Egan are the standouts as the couple fighting off ghosts while sometimes fighting off their feelings for each other, but with pros like that, can anyone else expect to upstage those two? Well, Stanwyck’s gorgeous oh-so-seventies wardrobe almost does. It’s the height of middle aged glamour and she looks beautiful showing off one majestic frock after another. 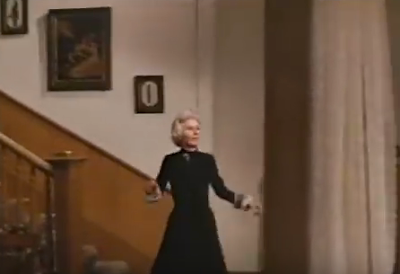 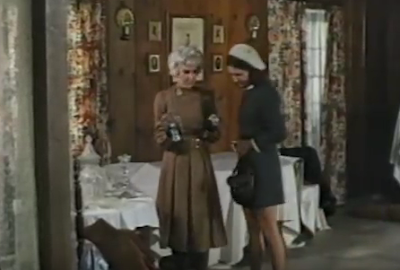 Spelling and Stawyck actually had a long and fruitful history together, beginning in 1968 with the Zane Grey Theater episode Trail to Nowhere, which Stanwyck appeared in and which Spelling produced. Afterwards, the two worked on The Dick Powell Theatre episode Special Assignment (1962), before Stanwyck made her telefilm debut in House. Afterwards she got a bit more sinister in the 1971 TVM A Taste of Evil, and then in 1973 starred in The Letters. She also played Toni in the gender bending Charlie’s Angels episode Toni’s Boys and then took a gig as Constance Colby on both Dynasty and in The Colbys. Stanwyck had already put in years of spellbinding professional work, but her more fanciful gigs with Spelling are memorable and wonderful. TV looked so good on her, and Spelling loved working with classic Hollywood, and did right by them (if I do say so myself). 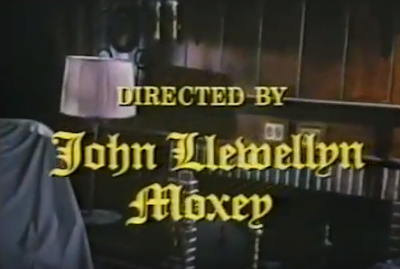 But let's not forget the other man behind the camera, John Llewellyn Moxey, who also directed Stanwyck in A Taste of Evil. The journeyman director knew how to make more out of less, and he maintains an economical but genuinely claustrophobic ambiance, especially in the possession scenes. There is something so charming about House, but in all honestly, it isn't just nostalgia that makes this film a true ABC Movie of the Week classic, it's just really simple and solid, almost perfecting that dark and stormy night watching that made so many of the MOWs so damn entertaining. In short, the goods are for real. 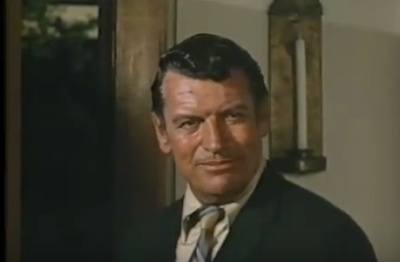 I was surprised to read that Ammie is actually a part of a trilogy of novels Michaels wrote, which is known as the Georgetown trilogy. According to this great article by Natalie Luhrs on Pretty Terrible, in the follow up, titled Shattered Silk, Michaels brings back Pat and Ruth, although the novel now follows another one of Ruth’s nieces named Karen who finds herself solving an old murder mystery. The third novel, Stitches in Time doesn’t keep it in the family, instead making the protagonist a friend of Karen's named Rachel, and involves a cursed quilt. Honestly, you can't go wrong with the novel or its small screen adaptation. It's creepy good times for the Halloween season!

One I have not seen, but definitely sounds like a fun one to seek out and watch. Thanks for the great review. Happy Halloween!

Amanda, I remember this one fondly along with Steven Spielberg's SOMETHING EVIL. However, I was unfamiliar with the Barbara Michael novel on which it was based. So that made your post even more interesting!

I haven't caught this one, either...but if Babs is on board, I'm board. Nice write-up, Amanda!

Looking forward to watching this one, which no doubt I caught the first time around long ago! What a terrific cast and stellar production credits. No doubt about Aaron Spelling -- he knew how to put it up on the little screen! A great blog entry for us this Halloween!! Thanks for the memories!

I haven't seen this yet either but now it's on the list. Another ABC Movie of the Week AND one directed my Moxey? This Terror TV blogathon is on fire!! Thanks for writing about this one :)

I saw this film in the mid-90s on late night TV. I absolutely loved it, and it made me seek out the book "Ammie Come Home," and I ended up becoming a huge Barbara Michaels fan. I think I've read all of her books. This is a great old TV movie, very atmospheric and suspenseful, and will be extremely nostalgic for people who actually remember these types of movies from the 70s and early 80s.