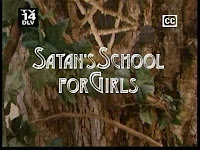 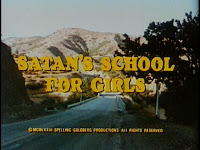 
There was a reason that ABC was once nicknamed the Aaron Broadcasting Channel! His resume of popular television outweighs almost any other filmmaker from that time period until today. I'm still not exactly sure what spurred the remake of Satan's School for Girls, except that perhaps Spelling had hoped to rekindle the once popular TV horror movie of the 70s and 80s. And why of all of his films he chose Satan 73 is anyone's guess. I mean, the man did produce the superior Home for the Holidays! Satan 73 is a fun but weakly paced film that will be mostly of interest to Charlie's Angels fans who would like to see the pairing of Kate Jackson and Cheryl Ladd pre-Jiggle TV. Well, it's also of interest to those of us who adore Roy Thinnes, a stalwart in these small screen terror flicks (Horror at 37,000 Feet, anyone?). Also, Satan 2000 gave Spelling and company a good shot at updating a supernatural film that originally had to forgo effects for expense's sake. If that’s so, the 2000 version is replete with bad CGI to make up for it!

But was it worth it? I'm not scared by that shiny blonde hair at all!
Surprisingly, although these films are extremely different - only sharing various character names and the most base of concepts - both are full of enough moxey to warrant a lazy Sunday viewing.

The original came along in the early 70s and therefore relies heavily on traditional suspense devices (stormy nights, creepy corridors, etc...) to push the plot ahead. The adorable Pamela Franklin is the daring Elizabeth Sayers, a woman who has checked into her sister's all girl college after sis hangs herself. Determined to discover the truth behind Salem Academy, Elizabeth may have gotten more than she bargained for when the horrible truth is finally revealed. Why are all the girls looking away from Roy? You're supposed to look at him!

Besides the familiar and well-liked faces of Jackson, Ladd and Thinnes, Lloyd Bochner and Jo Van Fleet also put in good time. The allure of this film mostly comes from its salacious title, which must have perked up a few tired eyes when the ads first appeared in TV Guide! Those were the days!

Although not one of the better made for television films, it is well remembered and does have some interesting and creepy qualities. Bochner’s performance as the on-the-edge-of-a-breakdown science teacher is so over the top you swear he’ flying! There’s not much of a surprise at the end reveal, but there’s enough atmosphere to keep you hanging on… I can make FIRE!

The remake came at a time when TV movies weren't making many waves and the violence and sex factor could be upped slightly. And upping it slightly is exactly what Satan 2000 did. A little more sexy and a bit more gruesome, Satan 2000 (oh, why don't they just make a movie called Satan 2000! I'd watch it!) works mostly because of the actors. Shannen Doherty takes over the Pamela Franklin part - this time she's the plucky Beth Hammersmith who enrolls herself into a lush New England girl’s college to uncover the secrets surrounding her sister's death. A little bit more background is given to the Hammersmiths and since Doherty had made such a splash on Charmed, Beth now has supernatural powers which she is coming to grips with. You could easily call this a supersized Charmed episode (minus the humor) without offending anyone. Still, it's a fun, watchable film... if nothing to write home about. He's no Roy Thinnes... but close enough
I do love Shannen Doherty so, and she really holds her own here and comes across as warm and charismatic, especially with her love interest (another new twist), Mark (Daniel Cosgrove - also of 90210 but after Shannen left). Kate Jackson returns, this time as The Dean. She's not given much to work with but she does have some good screen time. I'm not sure there was ever an actress more natural than Kate. Or Miss Jackson if you're nasty.

If you had to pick one (I know, why is life so hard!), I'd go with the Satan 73 because the pairing of Ladd and Jackson remains oh-so-sweet. The original is available on DVD and the remake airs sometimes on ABC Family (!), so what's your excuse?!? Clearly the winner
Posted by Amanda By Night at 10:22 PM

Email ThisBlogThis!Share to TwitterShare to FacebookShare to Pinterest
Labels: ABC Movie of the Week, glamour, horror, made for tv, stud, supernatural

I haven't seen the original, but I have seen the remake. Mainly remembered for being rubbish - and for its complete failure to hide the Quebec location shooting...