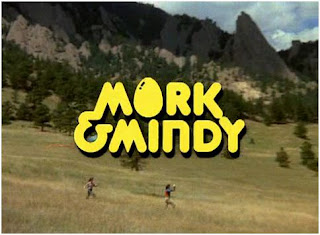 OK, so out of the blue I started to think about Mork and Mindy and the wild decline from hit show to total miss. While I still find many of the episodes after Season One quite entertaining, the whole Mearth thing was... ummm... just weird. Now that I am older, I have been able to put those obtuse thoughts I had as a kid into some kind of words. 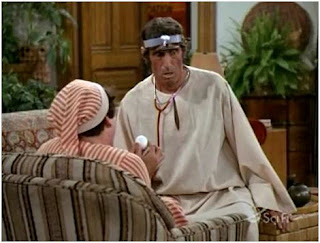 The look on Exidor's face explains it all

Even as a kid watching the fourth season of Mork and Mindy I knew something was not only wrong with Mork’s pregnancy, but also with the concept of an earthling and an alien mating. I can accept an alien wanting to get it on with Pam Dawber… just look at her… but Pam wanting to do it with an E.T. left a strangely uncomfortable feeling inside me. Plus he wore those horrible suspenders… And now I find myself wondering how Mork got Mindy’s DNA (and/or egg!). I mean, what exactly did he snatch (!) from her during those... ummm... copulatory sessions of love? I keep having visions of Mork drinking with his finger. OK, I refuse to even try to wrap my brain around that… 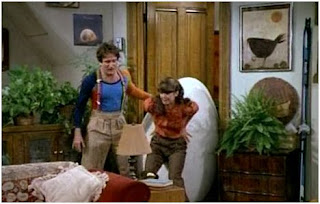 The craziest Easter Egg hunt ever!

Mindy even discusses how she is missing out on the wonder of childbirth and like any awesome sitcom, her trauma is quickly glossed over as Mearth is hatched from a giant egg. Eventually, he gets a creepy pair of overalls and learns to call her "Shoe." How sweet parenting can be.

The fourth season of Mork and Mindy was an undisputed bomb, landing in 60th place! I think pairing Jonathan Winters with Robin Williams was an ingenious bit of casting, but suffice to say Mork not only laid an egg, but so did the show. 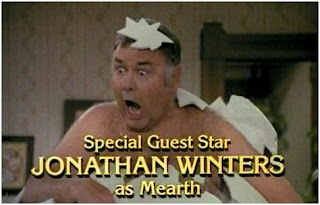 No caption needed!
Oh yeah, and Mindy had the best apartment ever.

I have not seen the Curious Case of Benjamin Button, but here is an article explaining why the movie will never be as good as Mork and Mindy.

And is it just me, or does Mearth remind anyone of The Baby? I mean, minus the electric cattle prod.

I, too, thought it was odd, as a kid. But I do like that they had Mindy and Mearth work at bonding. Someone was trying to make some sense out of the situation!

I'm also glad Mindy got some happiness out of the situation, cuz from where I'm standing, it's just weird!

Thanks for reading and commenting!

hey thanks for finding and posting these great clips!! Some gilded age of TV this was...Robin Williams is unbeatable. Was, and is! And Parker....lol sigh...I also saw a clip/jpeg/link you had up for 'The Man from Atlantis' I was SOOO in love with that show and not for the writing,right?

I may be the only child of the 80s who wasn't a Mork and Mindy fan...not just for the reasons you mentioned, but also because I couldn't stand Robin Williams and found him too annoying to be funny. Plus, Pam Dawber as Mindy was kind of cute, why would she have anything to do with an obnoxious alien nerd like Mork? (As I'm sure you know, in real life she married the super hottie Mark Harmon.) Kind of like the final show of Perfect Strangers where Balkie ended up marrying a blonde. Jonathan Winters was the icing on the cake of weirdness on that show.

I remember the two of the standing on the goal post in the credits & as a kid, I couldn't figure out how they got up there. Didn't Mindy work in a record store for a season? Regardless, it's always great to see that throaty firecracker Ruth Roman... LOVE HER! When I grow up, I want to be just like her.

Darrin, my love of Parker knows no bounds, but can you believe I STILL have not seen the Man from Atlantis?

Pam, I ge where you are coming from. Mork was not for everyone. I still enjoy the show quite a bit, but Mearth just weirds me out!

John, it is IMPOSSIBLE for me to think of The Baby and not think of you. And that was a compliment! :)

I was never a fan of Mork and Mindy, I like Robin Williams, but it was just too annoying to grab me. lol. And now that I see this, I don't think I'll really invest time in it. Weird! Why couldn't they just have a regular cute baby?

Oh Amanda, you MUST see Man From Atlantis, if only just to see beautiful Patrick Duffy. He is amazing in it. The swimming, the acting-he's so stoic and out of tune with the people on land. Yet utterly charming at the same time. I did write a blog post about MFA too.
This Youtuber has posted some episodes if you want to watch-
http://www.youtube.com/user/kevintbaldwin#p/search