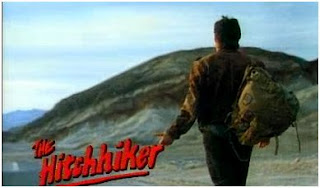 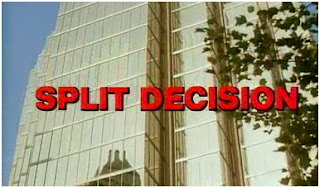 It also started innocently enough, when someone posted a traumafession over at Kindertrauma. It was about twins who tend to share everything. I might not have thought much about it afterwards, but as my lucky stars would have it, it was revealed that this was an episode of The Hitchhiker titled Split Decision and it starred the Landers Sisters! And then, as if little angels had come to grant my every wish, I found out this episode is streaming on Hulu! Ah, The world just got a little better. 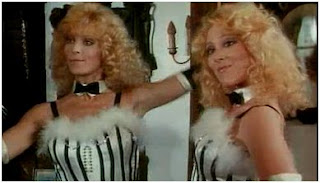 Audrey and Judy are Priscilla and Francis Packard. They aren’t completely identical, but buxom and blonde enough that real estate sleazebag agent Jake McElhaney (Jackson Davis) doesn’t bother to look any closer. He’s trying to sell their house because these twins, who used to work the carnival circuit with their now deceased dad, are pretty sick of each other and want their own places. However, because they like to share everything too, Jake becomes Boy Toy extraordinaire, despite his cheeseball bowties.

Watching this episode yesterday I thought it must have been made in the mid to late 80s, because poodle perms do not lie. I was shocked to see it actually aired in 1983, so I am thinking the Landers ladies are responsible for bringing split-ends to the latter part of the decade! Who knew? 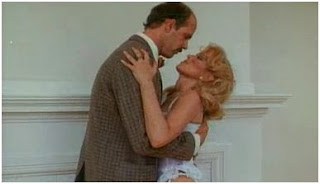 Bow tie love in the afternoon

Split Decision is fairly predictable, but quirky and fun. I actually had no idea that the original Hitchhiker was Nicholas Campbell who stars in my favorite episode of the Canadian romance TV movie series Shades of Love, titled Champagne for Two. Yes, I have a favorite Shades of Love movie… In this episode of The Hitchhiker he’s a little less vague than Page Fletcher who was given some really obtuse dialog to wrangle. Both look good in tight jeans though, so I won’t complain.

If you’re in the mood for candy-colored creepy, I think this Landers love-fest should fit the bill!

And make sure you visit this awesome website dedicated to the Landers Sisters
Posted by Amanda By Night at 2:18 PM

That Landers Sister website is my new favorite thing. I really want to send them a letter in the mail with a self-addressed stamped envelope... why does the site have that disclaimer? I doubt Audrey is too cheap to pony up for return postage, but perhaps that Judy is. Oh Judy! Anyhows, I honestly want to redesign kindertrauma to look just like their site. (Shhh, don't tell Lance...)

I do think KT could benefit with a little extra Landers. I mean, who couldn't? :)