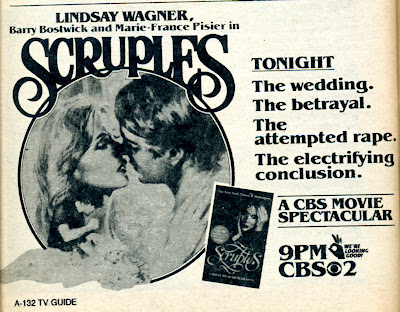 Welcome to the first installment of a series I'll be doing for an indefinite period of time.

Who doesn't love old TV spots? No one, that's who! I thought it would fun to feature commercials/promos/etc, with a bit of commentary and hopefully some TV Guide Ads, if I have them (or can locate them).

I thought I'd start the whole shebang off with Scruples, which was the popular 1980 mini-series that ran over three sultry nights on CBS starting on February 25th, 1980. Based on Judith Krantz's best selling novel, Scruples was a devilishly salacious read, and a pretty good tele-film, especially considering what they couldn't show! My goodness... 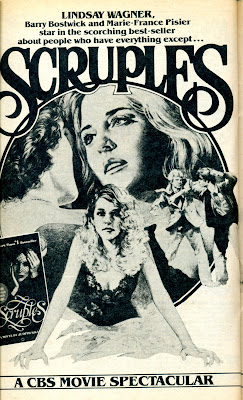 Lindsay Wagner plays the awkward Billy Ikehorn, a young woman who finds herself (and her fabulousness) as a teenager in Paris. She marries rich, and when her old hubby kicks the bucket Billy makes a name for herself in the high-end of fashion retail. She takes a gorgeous Spider Elliot (the great Barry Bostwick who can do no wrong) and Valentine (Marie-France Pisier, who is so gorgeously ethereal, I could not take my eyes off of her) along for the ride.

Scruples is incredible. I watched it one sitting recently because I simply could not turn it off. It is available through Warner Archives, and quite frankly, buying the DVD is only an investment in your happiness. 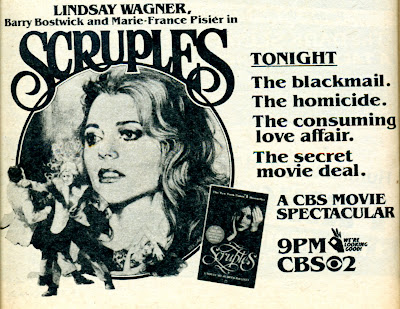 The TV spot posted below pretty much captures everything I love about the film. Tons of wonderful small screen faces (Robert Reed, I'm looking at you), glamour oozing off the screen (that's not as gross as it sounds) and lots of sudsy melodrama. It's high class trash, and that's the way I like it!

I'd LOVE to see the East of Eden adaptation! Must get on that!

Glad you like my new series! :) I appreciate your feedback!