I was so pleased when the Meepster himself (he who runs the incredible blog Cinema du Meep) accepted my request to write a little ditty about This House Possessed! He put together this pithy little tribute:

This House Possessed
by Michael of Cinema Du Meep
This House Possessed is kind of the best TV-Movie title ever. I mean, you get exactly what you are looking for! Who can't find a deep appreciation for that. Well, besides a good haunting story set against sunny California in a creepy mid-century house, Possessed also gives you a few more early 80's treats. For fans of TV's The Hardy Boys, it's in the shape of the former teen idol, now all man Parker Stevenson. For fans of girls with spunk, it's the wonderful Lisa Eilbacher. Before she became Axel Foley's big haired confidant in Beverly Hills Cop, Lisa snagged herself the plum role of cute as a button nurse to Parker's ailing Rock Star. There's also some very swanky music and supporting roles by Former Presidential Candidate John Dukakis (!), Slim Pickens, Joan Bennett, David Paymer, Barry Corbin and Phillip Baker Hall. Character actor heaven! Director William Wiard also directed the likewise fabulously titled Ski Lift To Death and the movie was produced by television producer god Leonard Goldberg. There's a pedigree to This House that ski lifts it over other television movies of the time, and it's a lot of fun. Watch it in the dark in a possessed house you love. 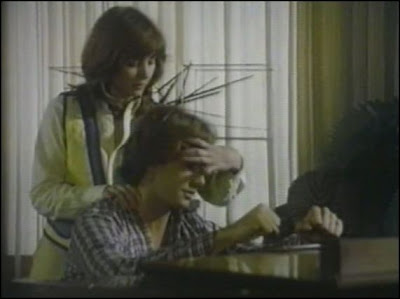