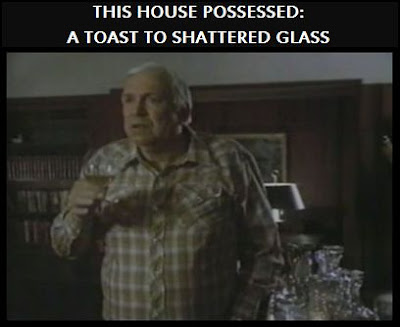 I have just bonded with the Vicar of VHS! It was a warming experience, one that I always get when I find another This House Possessed fan. I don't want to say we are legion or anything, but I think you are starting to get the point. The Vicar had already written an an excellent ode to the house with the best blood shower in the world, and you can read it here. I was so pleased that he agreed to tackle this House again for my blog, and it's forever amazing how much we latch key kids had in common! It makes me want to buy a world a Coke. 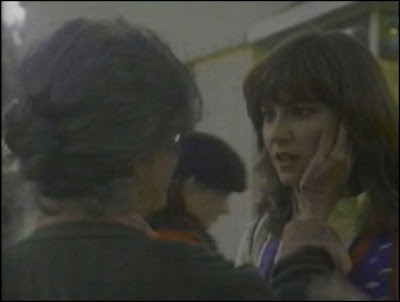 This House Possessed
Memories by the Vicar of VHS
I was born in 1971, and thus grew up in the late 70s and 80s. Kids today, with their Netflix and their Internets and their video-on-demand, would find it hard to believe the amount of effort horror-addicted children like me had to put into getting their horror fix. Scouring the listings in the newspaper and the weekly TV Guide, eyes peeled for anything at any hour on one of the big 3 (count 'em!) networks that might give that frisson of fear. Begging parents to allow us to stay up late for the Creature Feature, taking afternoon naps and loading up on sodas for stamina--and more often than not getting a near-unwatchable print of some public domain garbage for our efforts.

So whenever the genre wheel of the TV movie of the week spun up a horror flick, my brothers and I felt like we had won the lottery. And it was a golden age of made-for-TV horror--Don't Be Afraid of the Dark, Gargoyles, Bad Ronald--classics, every one. But the one I remember most, and with the greatest fondness, is 1981's This House Possessed.

I was ten years old in 1981, and my younger brother was just six. I guess my parents were a little permissive about what they would let us watch--but after all, this was Movie-of-the-Week stuff, right? How bad could it be?

Well, for me, the answer was not bad at all--I loved the "high-tech house goes berserk" premise, and as a big fan of Parker Stevenson's work in The Hardy Boys TV show, I was thrilled to see him battle supernatural forces in between rockin' singing gigs. I found the movie exciting, tense, and an all-out blast. 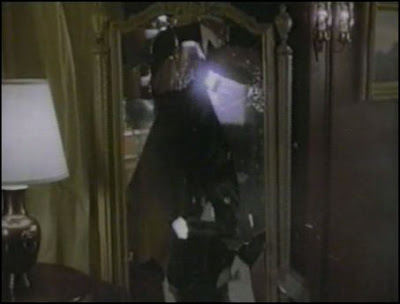 Can Ella shatter glass? So can this house!
My brother, however, did not. He was more than traumatized--he was scarred. For weeks afterward whenever one of the family slipped off to take a shower, within moments my brother was right there at the door, banging frantically, shouting again and again, "Are you all right? ARE YOU ALL RIGHT?!" And as for being in the bathroom by himself with the door closed, forget about it--he needed an escort to shield him from blood-spewing shower heads and possibly explosive mirrors.

Eventually, with time, his fear faded, and the story has a happy ending--he grew up to be almost as much a horror geek as his big brother. And a year or so back, we got to bond over a viewing of THP as adults, and both found it just as much fun as ever.

I don't know how long it was before he showered again, though. 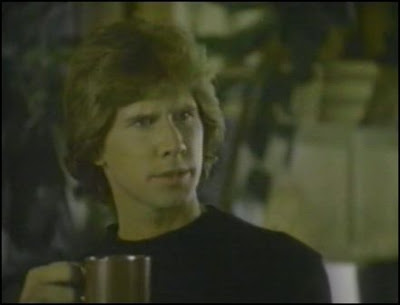 Yet another pensive toast for This House Possessed!
And please visit Vicar's site Mad Mad Mad Mad Movies! You will not regret it!
Posted by Amanda By Night at 6:06 PM

Oh man - great piece!! One of my most fond memories of my childhood is scouring the TV Guide for anything with the tag - Horror, - Mystery, or - Thriller!

The Vicar of VHS said...

Thanks, Carol! And thanks Amanda for letting me be a part of this super-cool celebration of all Houses Possessed! :D

I noticed you are a huge fan of This House Possessed. I have only seen the film online and that's because it doesn't seem to be available on DVD. I was wondering if you know if there are any acceptable copies of this movie on DVD? I really enjoyed it and would like to own it and be able to watch it on my own TV.

Hi Anon, I do not know of a reliable place to get a copy on DVD. You can try iOffer or Sell.com, but I cannot guarantee the quality. My copy isn't perfect, but the old vhs I had was nearly unwatchable.