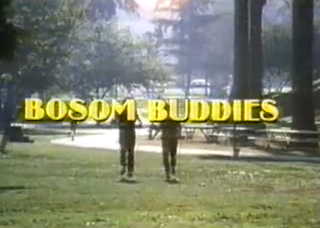 Although Bosom Buddies only lasted on ABC for a mere two seasons (1980 - 1982), it has remained close to my heart through the years. The premise was ridiculous and pure gold. Two down on their luck male friends need a place to stay and end up having to disguise themselves as women to cash in on a great deal on a small apartment. The men - Kip and Henry (Tom Hanks and Peter Scolari) - were not very feminine at all. Their alter egos, Buffy and Hildegarde were also not very feminine. And that was the Johnny-One-Note joke of the show (although it veered away from that in the second season). While we all love drag, this is not exactly an idea that should last past the length of the excellent Some Like it Hot. But Bosom Buddies works because Hanks and Scolari were simply fantastic in their roles. So was the supporting cast, with a special nod going to the late Wendy Jo Sperber who was simply adorable, and slightly terrifying. And because her character is a lot like me, carrying quite the torch for Peter Scolari! 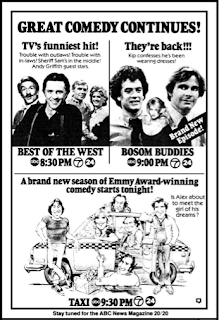 The leads were allowed to work with improvisation and many of the jokes were fast and furious... and unexpectedly hilarious. Both Hanks and Scolari had charisma to spare, and came across as some of the most likeable and adorable men in prime time. Their camaraderie would extend well past the run of the series, and the two have remained friends throughout the years. Hanks hit it big a short time later, and Scolari also had great success as the materialistic Michael on Newhart. 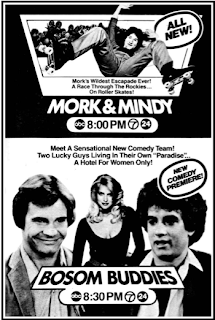 Bosom Buddies found a little extra life in 1984 when the series was rerun on ABC. However, the actors had gone on to greener pastures and the chance at a revival was never to be. For whatever reason, I think Bosom Buddies lasted just as long as it should have. It was silly and fun and would become the perfect way to introduce two wonderful actors to the world. And for the most part, the show still makes me smile. That's what it's all about!

Here are some great promos for Bosom Buddies: 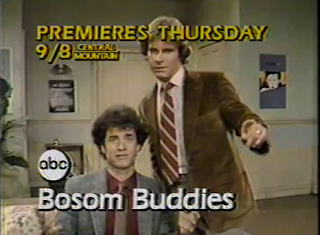 And just because the opening was so friggin' amazing (I'm sorry who doesn't love Peter Scolari in shorts?!?):

And here's a funny blooper clip:

I loved the show, too. Felt like it lasted longer than it actually did. And yeah, in retrospect, it did last as long as it needed to.

Hi Joe, thanks for the comment. I can't believe how well this show has aged. Silly for sure, but always funny!