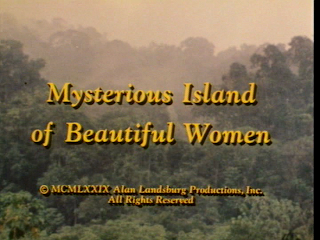 Why not end the 70s with a bang? The greatest decade in made for television movies really started pushing the envelope by this point, providing audiences with slightly more tawdry affairs. Besides Island, 1979 also saw the release of Sooner or Later, which featured a naughty love tryst between a 13 year old girl and a 17 year old rocker dude, and the awesome thriller A Vacation in Hell, which featured too much stuff to go into here! So it seems apt that as the world grooved into the neon drenched, sex filled 80s, that the 70s ended in high, sexy fashion. 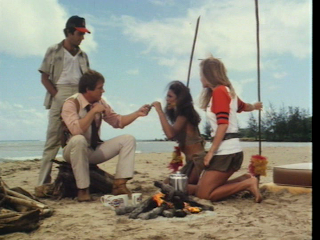 You don't even want to know what they've handed her!
Island begins with some stock war footage interspersed with a bunch of little girls and some nuns boarding a plane. Jump ahead about 25 years later to another plane. This time among the passengers is Clint Walker (he of the expanded chests), Peter Lawford and Steven Keats - en route to the “main land.” Walker has done something devious or illegal, but it’s never really made quite clear and Lawford is his ex-employer, and owner of a huge conglomerate, of which we have no idea what it is. The rest of the group include Lawford’s guard (the great Guich Koock from Carter Country!), a guy who is going blind (but we’re not sure why) and an alcoholic pilot. After an electrical storm, all of the equipment dies and the pilot loses his destination - Oh yeah, and maybe he’s drunk. He safely lands the plane near a beautiful uncharted island and much to the surprise and joy of the men, they are not alone. This island is populated with several hot chicks who have the mental capacity of five year olds. Seriously, what more could you want? Unfortunately, some native type men, affectionately referred to as “head choppers” by the idiot-woman-child-supermodels, often stop by for a bit of raping and pillaging. Obviously leery of any males, can they trust the new civilized guys to rid them of the nasty jungle men, or will they have to lay stake to their land by killing them? 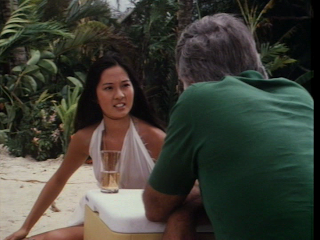 Flower gets down to business
Only in the 70s, my friend. Only in the 70s. Leave it up to the most audacious decade in film to attempt to bring true exploitation to the small screen. Co-written by Gary Sherman and Sandor Stern (who was an extremely prolific force in made for television films of that era) & directed by the equally awesome Joseph Pevney (who directed the famous Star Trek episode The Trouble with Tribbles) and featuring many awesome small screen faces (including Jayne Kennedy as a character named Chocolate!), Island has a lot going for it. It gets off to slow and rocky start (literally!), but kicks into full gear before the first half plays out, and becomes an interesting little film. Riding high on gorgeous women in loincloths, there is still some harrowing stuff, like the reveal of how the girls got to the island and how their leader Lizbeth (Jamie Lyn Bauer) comes into power. And there’s a cool off-screen decapitation for you horror nerds. 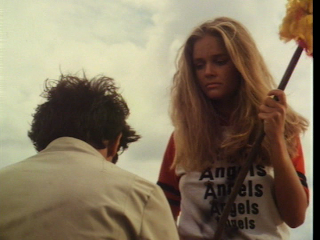 Snow loves baseball!
Clint Walker doesn’t have much to do or say about this island of lovely ladies, which is a shame. But the great Peter Lawford and the always likeable Steven Keats get to spend the most time with the girls. True to made for TV form, the exploitation ends at bikinis. Maybe it’s because I’m getting a little older, but I liked the simplicity of their situation and I also liked that the women weren’t completely objectified. The romance between Keats and Kathryn Davis (who is a blonde named Snow! I love this stuff!) is really sweet. Some might call it predictable but I call it charming.
Posted by Amanda By Night at 11:20 PM

Email ThisBlogThis!Share to TwitterShare to FacebookShare to Pinterest
Labels: Jayne Kennedy is hot, loincloths, made for tv, sexy, thriller