When the Movie of the Week was on a serious roll, audiences had to make some very complex and potentially heartbreaking decisions. I mean, Is it The Brady Girls Get Married or This House Possessed (answer: If you are me, This House Possessed, although I'm a huge Brady Brides fan). And those choices were actually at the tail end of the golden era (and in time for more households with VCRs), so imagine what it must have been like when people had to choose between Frankenstein and The Night Strangler (OAD 1/16/1973), Pray for the Wildcats and The Questor Tapes (OAD 1/23/1974), The Dead Don't Die and Satan's Triangle (OAD 1/14/1975) or The Dark Side of Innocence and Shark Kill (OAD 5/20/1976)? O.M.G. The mind boggles, right? Thank goodness, The Powers That Be saw fit to make the sure that the tele-films that aired during the week of September 16th - 22nd of 1973 only had a bit of overlap. Three new films debuted, two on the same night no less, but at least they ran at different times, so fans of small screen genre fare could enjoy the incredible premieres of Dying Room Only, Terror on the Beach and Satan's School for Girls. Sometimes, I do believe in a higher power!

I recently stumbled across full page ads for all three films in one of my old trusty and dusty TV Guides. Little squeals were heard throughout the house. I am posting them below, along with snippets of Judith Crist's reviews: 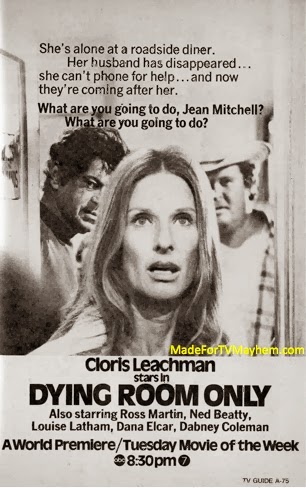 Of the three movies, Judith seems to enjoy Dying Room the most. She said, "Although Richard Matheson's script too often mistakes mere attenuation for suspense, there are a few goosebumps in this one, courtesy of the always commanding Miss Leachman and the creepy Psycho-type setting." 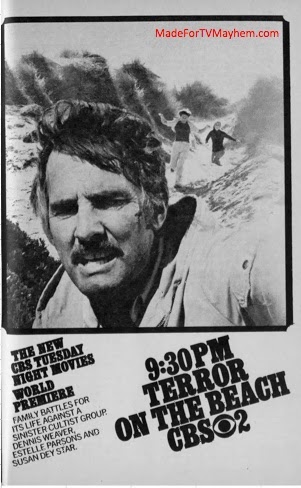 OK, OK, so there is some overlap between Dying Room and Terror on the Beach, but hopefully you would have been situated somewhere between your couch and your TV's channel dial! I like, but don't love Terror, although it does feature some fun moments and it pairs the great Dennis Weaver with the gorgeous Susan Dey as part of a family beset by a bunch of bad dudes. OK, I need to give this one a rewatch. The synopsis is just too B-movie enticing.

Judith was less positive about Terror saying that the "quickie-flick offers staunch performances by the always watchable Dennis Weaver, Estelle Parsons, and Kristoffer Tabori. Otherwise, it's typical horror-in-everyday-life harsh." OK, not too harsh, she does give her props! 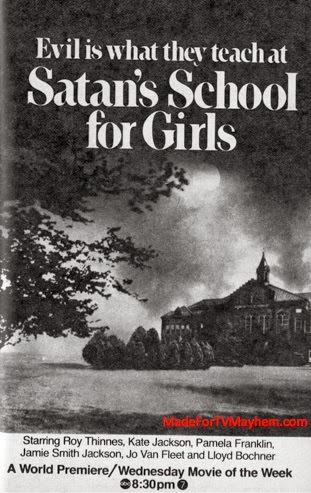 And if somewhat-realistic horror/terror/suspense ain't your bag, you could have found your groovy and supernatural mojo the next night with Satan's School for Girls! Of course, Satan's School is a classic of the genre, and one of the first titles I sought out when I decided to revisit the early gems of the genre. I'm a Roy Thinnes softie, but there's lots to love, including putting both Cheryl Ladd and Kate Jackson in their first project together, and casting the awesome Lloyd Bochner as the nervous red-herring professor. And hey, is that Pamela Franklin being cute as button? So, what else is new?

Judith didn't care for this one, but she agreed about Pamela's effervescent presence, writing, "Miss Franklin is, as always, lovely and talented, but even she can't save this stale supernatural stuff-and-nonsense - set in Salem, natch."

In general, Judith was rather kind with all of these movies, and that just makes picking a favorite that much harder! Which one do you love the most?
Posted by Amanda By Night at 6:12 PM

Ack! I don't know which I could have picked! I am guessing back then I would have gone with Satan's School for Girls!