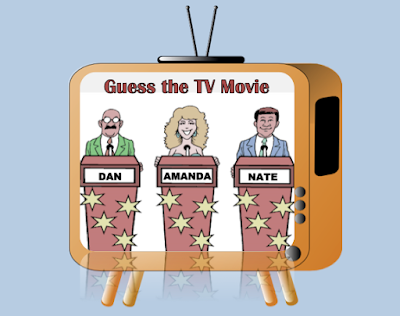 Anyway, in short... please keep tuning in.
Posted by Amanda By Night at 7:29 PM 5 comments: 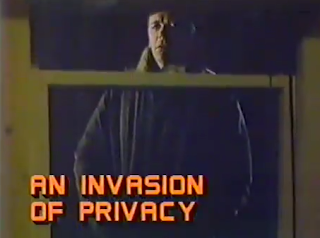 Valerie Harper had worked consistently since the cancellation of Rhoda in 1978, but 1982 would prove to be a banner year for the amazing actress. Harper had three TV movies in production, each one airing on one of the Big Three networks in the 1982/83 season. Most TV movie fans probably remember the undeniably scary and ageless classic Don’t Go To Sleep (12/10/1982, ABC), but her other two TVMs, the pilot movie Farrell for the People (10/18/1982, NBC) and the telefilm An Invasion of Privacy are also both solid films. What stands out about Ferrell and Invasion is that in one film (Ferrell), Harper plays a compassionate district attorney tangling with a complex rape case, and in an ironic turn of TV movie events, Harper then plays a rape victim working through the same unsympathetic system in Invasion. The films aired approximately 3 months apart. 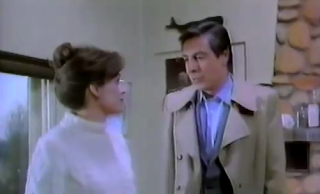 In Invasion, Harper is Kate Bianchi, a recently divorced mother who is attempting to reconnect with her freelance artist roots. She has relocated to a small town in Maine during the dead of winter to work on a textbook project. The locals run both hot and cold with Kate, but one man named Wilbur (J.C. Quinn) crosses the creepy vibe line a few times. On the hot side is Police Chief Carl Slater (Cliff DeYoung sporting an impressive moustache), a friendly but sometimes aggressive suitor who moves into Kate’s good graces quickly, sleeping with her on their first date. Kate is still struggling with the breakup of her marriage and puts her love affair on hold, but less than 24 hours after her first post-divorce romantic rendezvous, Wilbur rapes Kate in her own home (with her small daughter in the same house!). Kate seeks justice but is met with some apprehension as many of the townsfolk rally against Kate in support of lifelong resident Wilbur. Her previous tryst with Carl becomes a heated point of debate and Kate has to let go of personal discretion in order to find some form of punishment for Wilbur. 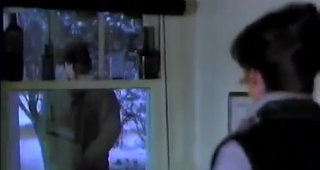 Invasion is undeniably good, anchored by a solid performance by Harper, and some beautiful photography by John Lindley (Demon Murder Case and Killer Party!). The first half of the film is played like a thriller with a strange sense of doom lurking around every frame. After the attack (which is mostly, and thankfully, left to the imagination of the audience), the film becomes a more straightforward procedural and falters a bit. However, it remains a compelling watch because of the way it examines how society puts the weight of the blame on the victim, and because Harper is just too damn good. Has she ever not been amazing in something? 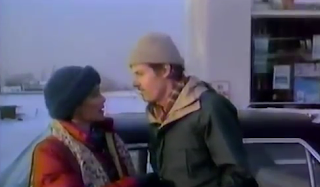 Based on a novel titled Asking for It by noted classic cinema actress turned screenwriter and novelist, Joan Taylor, there were many changes made to the adaptation, which was penned by Elaine Muller (her only IMDb credit), including dropping a subplot involving Kate’s politician father who uses the assault as a way to garner votes in an upcoming election, while also playing down the town’s resentment towards Kate. This was probably a bit of misstep, since the antipathy is made mostly in reference, while the “educated” transplants get most of the screen time, playing down Kate’s immense struggles to bring a local to justice in a town that seeks to protect its own. In this way, the xenophobia feels almost reversed, which hampers some of the film’s impact. 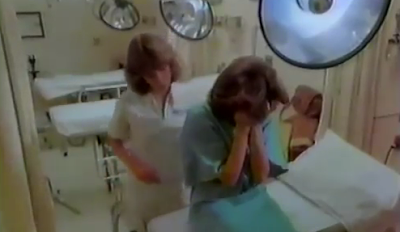 And yes, while Harper is terrific as Kate, the other hiccup in Invasion is how the character reacts in the aftermath. Certainly written this way, it is a bit too detached. Indeed that plays a bit off the clinical nature of what happens to most rape victims who report their crime and then have to face exams and questioning, but there’s no journey towards Kate’s ability to pull it together. At the same time, her impassive delivery is almost inspiring. She confronts the attack with no sense of guilt or blame, and remains focused on justice. 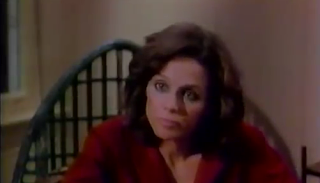 Invasion features lots of great small screen faces, including Richard Masur as a popular transplant desperate for acceptance, Carol Kane as his wife, Jeff Daniels in a very early role as a district attorney, and a very, very young Sarah Michelle Gellar as Harper’s daughter. She’s so cute, it’s almost ridiculous. Oh, let’s face it, she's still adorable! Both Jerry Orbach and Tammy Grimes (Tammy Grimes, y'all!), took a hiatus from a Broadway production of 42nd Street to put in cameos. Everyone is great in their roles, and do their best to help pad out some of the sections of the book that were excised in this adaptation. 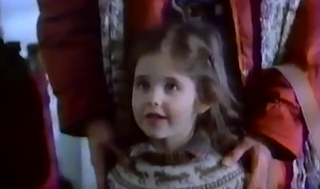 Shot on Shelter Island in New York, director Mel Damski creates a quiet, sensitive and intriguing drama-bordering-on-thriller that was met with mostly positive reviews when it was originally released. The sad part is that the act of victim blaming is still all too relevant, even now, thirty years after the release of this worthwhile TV movie. 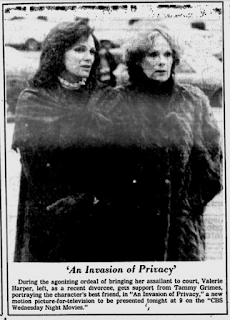 (Note: apologies for the blurry stills, it was the best I could get!)

Here is the TV promo spot for Invasion of Privacy:

Posted by Amanda By Night at 8:45 AM No comments: