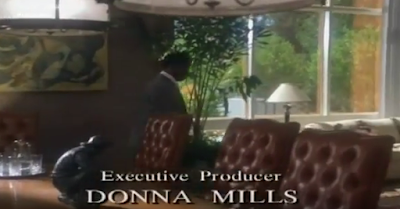 After taking a couple of years off from her bad girl role as Abby Cunningham Ewing on Knots Landing, Donna Mills revisited her femme fatale roots in the 1995 true crime drama An Element of Truth. Based on the story of con artist Glenda Elizabeth Bell, Mills is a somewhat fictionalized version named Vanessa Graves. From the start of the film she plays up a sympathy act, claiming on a job interview that her husband and daughter were killed in a car accident and she’s desperate to start over. Later, at an office party the story starts changing. Yes, her husband and daughter were killed in an accident, but this time it’s a plane crash. Sometimes it’s a boating accident. It’s whatever she needs to say to suit the situation. Vanessa visits a video dating service and eyes the kindhearted Sidney Wiltz (Peter Reigert, and I’m wondering if “Wiltz” is a play on his wilting nature?), who, of course, is instantly drawn to the gorgeous but grieving “widow,” taking her in almost immediately.

Vanessa tells Sidney she works as a secretary at an investment firm, but only holds the lowly position as a way to cover up her real reason for being there: She is, according to her own story, allowed to secretly invest in ventures as long as she does it in cash. So, Sidney starts forking over the big bucks, and Vanessa prints out legitimate looking Word docs indicating great financial growth. Fancy cars, pretty things, big houses, and life in a moderately fast lane seem pretty good and one might even think she actually likes Sidney, but then his garish but handsome (and down on his luck) buddy, Peter (Robin Thomas) shows up and begins an affair with Vanessa. However, it appears the con artist has met her match as he bilks her of all the money she’s collected from Sidney. This means Vanessa has to up her game, and no one is safe from the blonde flimflam as she shakes and shimmies her cold-heart through the rest of the telefilm. And honestly? It’s kind of glorious!

The 1990s was an oddball time in the world of the television film. Don’t get me wrong, I love it, and appreciate it more as time passes, but the true crime telefilm of that era seems infinite, and it’s easy to see why An Element of Truth has flown under my radar for the last two decades. There’s not necessarily a lot going for it that helps to distinguish it from similar fare, and there are admittedly more entertaining small screen examples, such as Death of a Cheerleader (Tori Spelling 4lyfe!), and Deadly Vows (John Ritter 4lyfe!), but that’s not to say it’s not a fun little potboiler, with some great photography and a really entertaining performance by Mills, who knows how sink her teeth into hustler roles. She’s captivating, looks ridiculously gorgeous, and despite playing a detestable character remains charming and watchable.

In fact, the entire cast is quite good with a lovely Perry Reeves putting in an incredibly sympathetic turn as Maizie, Vanessa’s awkward coworker who develops a crush on Sidney. The film has a couple of really sweet moments as we see their relationship develop. Galdarnit! He deserves a good woman!

Bell, the real con artist, not only managed to snake over a million dollars from her unsuspecting hubby before running off and remarrying, but she also faked a cancer diagnosis as part of her trickery! But the seedier true life elements of Bell's treachery were removed because the powers that be felt that audiences wouldn’t believe those things really happened! Stranger than fiction, folks!

Produced by Miss Mills herself, this was just one of several TV movies the beauty took on after Knots Landing as way to help audiences separate her from her infamous Abby Ewing character. Donna Mills Productions, which was founded in the late 1980s, did quite well for itself, and Mills had 10 projects in development with ABC by 1993 (although not all of them came to fruition). While An Element of Truth puts her closer to Abby than any of the other roles I’ve seen, there’s something more sinister about Vanessa, although she is just as gleefully man-eating! It’s an interesting turn for Mills who manages to make Vanessa unique and even disarming at times. And, it's a decent time waster to boot.
Posted by Amanda By Night at 5:42 PM 1 comment: