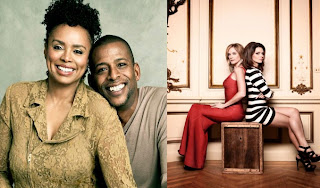 All My Children and One Life to Live have recently gone back into production and the premiere date has been set for April 29th!

Since I'm always doing something online, I've noticed that there's been some confusion regarding the venue and access to these shows. So I wanted to clear some things up:
Today, both All My Children and One Life to Live released trailers for their upcoming revivals. Spoiler: They are amazing:


All My Children:
One Life to Live:

The episodes will be 30 minutes long and there will be new episodes uploaded from Monday - Thursday. Friday's episode will be recaps.

While some of the actors could not come back due to other commitments, both shows got a lot of core characters, and the crews are heavily compromised of soap vets. Also, Agnes Nixon, the lady who created both AMC and OLTL was brought on board to help create the path these shows will go. Yes, it's OK to say Yay!

With regards to the "General Hospital 3" (the title refers to the three characters who moved from OLTL to GH after it was cancelled), there has been a lot of speculation, but no official word has come from either camp regarding the future of the characters or actors. I think at this stage, we can assume that Michael Easton (John McBain) and Kristen Alderson (Starr Manning) will probably be assuming new characters on GH, but Roger Howarth (the hunky, funky Todd Manning) is shooting several episodes of OLTL right now... as we speak! I'm not sure what this means for Roger the actor or Todd the character. What I think we all want is what the actors want, but let's just get one thing clear... These characters were bought by Prospect Park, and they are new to this and of course want the legacy characters on the canvas. They loaned these three popular characters to GH as a way to keep the show fresh in people's mind while they sought financing for their own venture. They also did not try to hold onto Frank Valenti, who was OLTL's executive producer, or Ron Carlivati, OLTL's head writer, and let them move over the GH in February of 2012. Since Frank and Ron, lovingly referred to as Cartini, have made the move, GH has become nothing short of incredible. The transition was rough and not without its ups and downs (Steve Burton's exit is still being debated over), but they brought in GH's recent 50th anniversary with aplomb (and it's continuing! Don't forget to tune in!). I understand that it took some fans a while to acclimate to the OLTL characters, and I know they have been integrated well (especially Todd, a fan favorite), but I also know that Prospect Park has a lot riding on their new venture. Either way, I fully support both shows (and AMC), and I will continue to get behind these soaps regardless of what changes or who is recast as whom. I hope you do too. I mean, does anyone else remember when Blair was half-Asian?!? Yeah, that's what I'm sayin'...

I've been thinking a lot about the general resistance from several "fans" who won't watch shows in an online format. Today, someone posted on one of the show's facebook pages that she is old school and won't make a transition to the interwebs, like that's some kind of badge of honor. Here go my chips on the table... If anyone around here is old school, it's yours truly, and my response to her - and to all those naysayers who want to poo poo on the shows without even making one effort to give it a shot - is that it's the not the format we want to preserve, it's the storytelling. If we want to keep the genre alive, we're going to need to make adjustments.

Yes, I know this format leaves out some of the older population who might not have computers, access to the web, or the ability to work a computer the way us younger bucks do. And yes, I know currently there is no outlet available for soap fans outside of the USA (however, Prospect Park is currently looking for deals in foreign markets). I don't have a response for them, except to say that the production company who is making this possible is not intentionally leaving any one out of the loop. This is the best format for the company to revive these shows. If they thought a network was interested, I'm sure they would have pursued it. As it stands, everything starts with a seed. Remember when the genre transitioned from radio to television. The episodes were 15 minutes long, and eventually, they grew into the format we know them as today. The internet will allow for some freedom, and while one of the writers from OLTL (Thomas Racina) has said things will be slightly more scandalous, no one is looking at making softcore porn. And for the record, since I'm laying it all out there for you guys, I find it somewhat silly that people are complaining about the shows being edgier. Didn't Kevin Buchanan and Kelly Cramer take an almost nude shower a few years ago? Doesn't the uber-sophisticated Erica Kane have a gazillion ex-husbands? I thought so.

From where I'm standing, we are in a wonderful place. Many of us worked very hard to get these shows back into production. Letters went to ABC, Prospect Park, advertisers, entertainment websites, you name it. Didn't someone say, if you build it, they will come? Well guys, we built it, so I'm expecting you all to show up on April 29th and let your freaky soap flags fly!