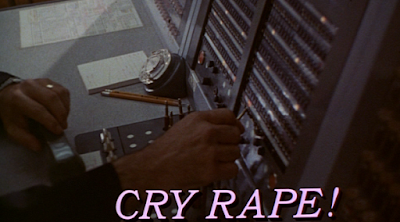 Fresh off of the daytime drama, Love is a Many Splendored Thing, Andrea Marcovicci took another dramatic turn in the harrowing but flawed Cry Rape, which predates the better known (and, frankly, better made) A Case of Rape by mere months. In Cry Rape, Marcovicci is Betty Jenner, an unassuming young woman who comes home from a normal day at work and is attacked by a serial rapist. Mustering up the energy to follow up the assault with police action, Betty is run through a system that seeks to continually victimize the victim. After a man is apprehended, more women step forward, but as the trial and investigation continues it becomes apparent that these women have wrongly accused the defendant. 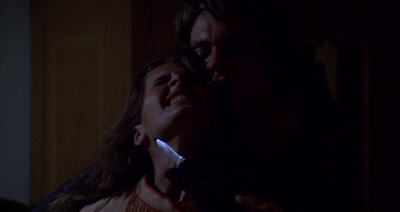 Both Cry Rape and A Case of Rape landed in the top ten most watched telefilms of the 1973-74 season, with Case coming in at #2, boasting a 33.1/44 rating, and Cry settling in at #8 with a rating of 27.6/43. Almost half of America was finally opening their eyes the problems of a justice system that may have good intentions, but used very poor methods to solve a heinous crime. In this respect, Cry Rape is an essential film. It does indeed offer a fairly realistic look at the system, and does so through a strong character determined to see that justice prevails. Unfortunately, Betty only bookends a movie that is all about the misidentified culprit and his plight to prove his innocence (or more aptly, the police department’s plight).

In an interview to promote the movie, screenwriter Leonard Freeman stated that he was aware of the production of A Case of Rape and hoped it would change the system. He said, "Look at the newspapers, the news magazines, the legal journals - the concern about the growing incidence of rape, our antiquated laws on rape, the horrible treatment by the police and the courts of women who are willing to press charges... No, I'm not in the least surprised that these two stories would emerge simultaneously. I am surprised that both of them are in prime time where they will be seen by a wide audience - not hidden in some Sunday afternoon ghetto."

In the end, I had very mixed feelings about the way the film played out. I appreciate the effort to bring attention to a sensitive topic that absolutely needed addressing. However, disregarding Betty for more than half of the film is troubling. It reminds me of 1976’s Revenge for a Rape with Mike Connors. In Revenge, the assault takes a backseat to the heady action scene at the end, which features Connors, not the victim, "getting revenge" (and, if memory serves, has a similar twist). With this approach, the survivor is put under question when it’s revealed that she accused the wrong man. In both of these films, rape is merely a plot device. 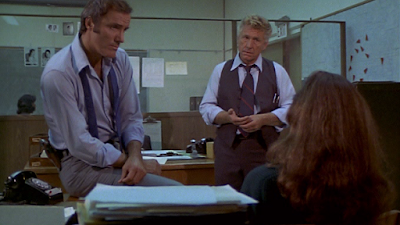 At the same time, I did like the ending of Cry because it doesn’t just pat Betty on the back and assume life will resume some kind of normalcy for her. In this respect, it is reminiscent of Are You in the House Alone?, which does a better of job of telegraphing that notion, and, of course, that telefilm is told from the female’s point of view, giving it a gravitas and a sense of realism that Cry lacks.

This is not to say that Cry Rape should be completely disregarded. It’s a very watchable telefilm, with great acting, especially from Peter Coffield and Joseph Sirola (who I know best from his many appearances on Quincy). As a mystery film, it does have its intrigue, and it is an efficient, and sometimes energetic entry into the early days of the telefilm. Mostly though it is an important cultural artifact, because it got to the gate first, and made an honest attempt to depict the horrors of sexual assault. The scenes with Betty are harrowing, and I appreciate that the script makes sure that not every male character is a jerk. It also invites us (all to briefly though) into another survivor’s life, and manages to give viewers something to think about. I just wish those moments were longer, and the mystery aspect played down. 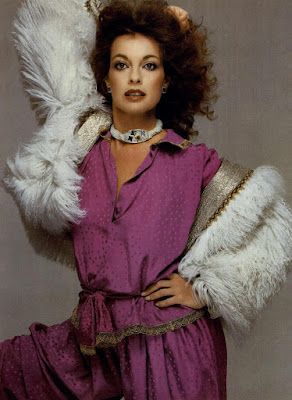 Here I am, with yet another update, but I will posting a new review soon too! Hooray! I've really missed this place. 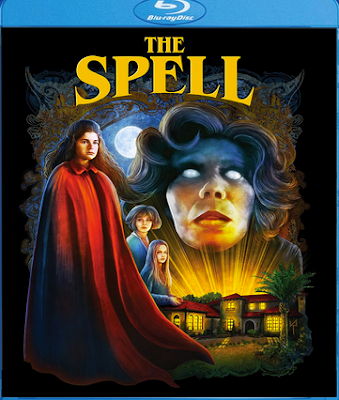 I think the biggest news that I haven't posted here is that I provided the commentary track to Shout! Factory's Blu Ray release of the 1977 telefilm The Spell! It's available! Please buy it! You don't have to listen to my commentary (but you know, if so inclined, go for it!), but we need to support the legitimate release of telefilms! This is just one of several TVMs coming out. Exciting times!!! Let's keep this rolling!

And, I'll be back in England at the end of October to present a short paper at the At Home with Horror conference at Kent University!

I've been running around the web-o-sphere like the devil! I've guested on a few more podcasts, was interviewed and contributed to an article (or two, I'm forgetting).

Just One More Thing had me on in an attempt to figure out all that was wrong with the pilot TVM for Mrs. Columbo
website | iTunes

And I got to hang out with more Australians over at the Dr. Snuggles show, where we talked about the direct-to-video erotica flick Emmanuelle Through Time: Sex and Chocolate
website | iTunes

I did a couple of guest spots on The Hysteria Continues, where we chatted about the classic telefilm Don't Go to Sleep, as well as one of my favorite late entry slashers, Hack-o-lantern!

(*btw, Justin mentioned me on The Hysteria Continues commentary track for Madhouse! Thank you! That was neat!)

I was interviewed by one of my all time favorite people, Jeremy Richey for his gorgeous print magazine Art Decades!

I was interviewed by Samm Deighan on Diabolique Magazine's website for the upcoming book Yuletide Terror! There's lots of talk of holiday horror for both the big and small screen.

The Austin Chronicle conducted a brief interview with me regarding a screening of Fantasies that I curated and hosted for the Austin Film Society! OMG. That was amazing. And a big shout out to all the people that showed up. We only had a few seats left when the movie started!

I was also interviewed by Vanessa Morgan on her site Celluloid Diaries. This one is about my book, Are You in the House Alone? A TV Movie Compendium: 1964-1999 (which is available on Amazon!). I would like to mention that Vanessa published an essay I wrote on the early 70s telefilm Locusts in her excellent book When Animals Attack! 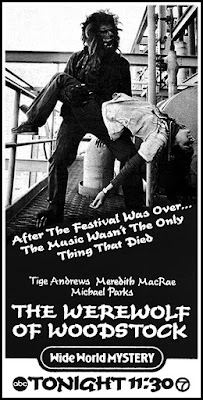 I co-wrote an article with Lance Vaughan on a slasher I love, The Slayer for Kindertrauma!

I also did a Name that TV Guide Ad for Kindertrauma. See how many you can identify (answers in the comments section).

There's been a few absolutely lovely reviews for my book as well: CAN I BREATHE NOW?

I've got one or two more things coming up, and will post accordingly! Keep an eye on this blog over the next week because...

The Made for TV Mayhem Show is going swimmingly (the RSS feed is located on the upper right sidebar). We're reconvening on September 28th to talk about the ABC Afterschool Special. The big news is that this space will be hosting an email Q&A I conducted with Lance Guest! He was very kind about taking time out to answer a few questions from a goofy fan. So excited!

I feel very fortunate to be here right now, and I've gotten so much love and support from a lot of people who were once strangers. Thank you again for your patience with my blog updates and for listening, reading and/or whatever! It means the world to me! 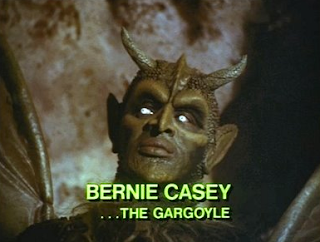 Finally, I just want to say that I'm absolutely heartbroken over losing Bernie Casey. A wonderful actor, and mascot to this site, and a stalwart small screen companion. Thank you, Bernie. You are loved and missed.
Posted by Amanda By Night at 3:29 PM 2 comments: