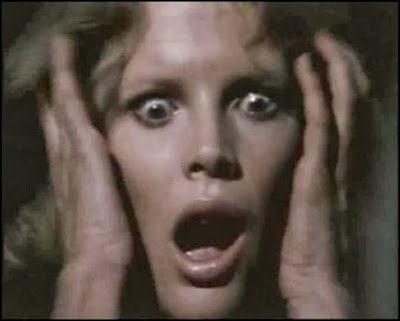 Hey everyone, I just took part in the Movies About Girls Halloween Spooktacular! Hosted by MAG regular, Kent Shelton, this offers good times galore! I throw in a couple of scary TV movie recommendations, and some of the other MAGcasters reminisce about Bit-o-Honey!

You can listen to the podcast here. Also, this is not for the faint of heart, expect cursing and other objectionable material. OK, probably just some cursing.

Hammer House of Horror: The House that Bled to Death (1980) 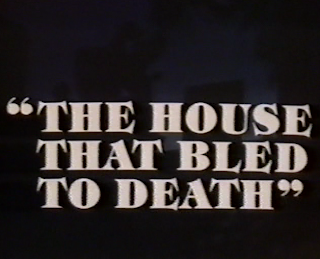 This post is part of the Hammer Halloween Blogathon hosted by the Classic Film & TV Café. Click here to view the complete blogathon schedule.

Hammer is synonymous with horror. Ain’t no two ways about it! Sure they got their feet wet in 1934 with the comedy The Public Life of Henry the Ninth, but that only goes to show what a long and incredible history Hammer Films has enjoyed. They found their true mojo in horror films and produced their most memorable content in the 1960s and 70s. Great actors, tight bodices and gothic chills ensured that their output would be loved then and loved now. But like all good things, Hammer theatrical films came to an end in 1976 after their release of To the Devil a Daughter. And like all incredible things, as of late they’ve enjoyed a bit of resurgence.

Woman in Black, anyone? 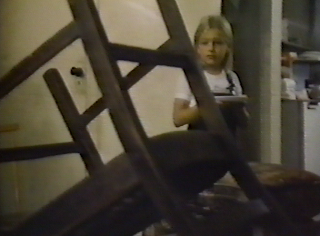 In between Daughter and Woman (now there's a metaphorical transition), Hammer Films produced two television series, Hammer House of Horror (1980) and Hammer House of Mystery and Suspense (1984). I am most familiar with the latter production because the Mystery and Suspense episodes were feature length and some ran in America in the 90s under the moniker Fox Mystery Theater. However, unbeknownst to me, I was actually somewhat familiar with House of Horror, because many of the episodes found their way onto VHS under the heading of Thriller Video, and they featured bumpers hosted by none other than Elvira. 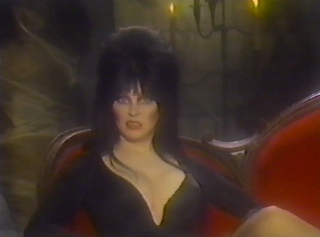 I worked at a video store in the early 1990s and the Thriller Videos were fairly popular rentals, probably because of Elvira and the short running lengths of the films (what’s to lose, right). I did not rent them at the time because I was Miss Dark and Mysterious (I am Amanda By Night you know), and I spent most of my time renting crazy flicks like Make Them Die Slowly (and regretting it!). As an aside, Thriller Video also released Slowly, but Elvira didn’t want to be associated with it, so she was excused from hosting duties on that video. I can’t say I blame her. But I digress… I remember that I was a bit obsessed with the Thriller Video box for Carpathian Eagle because it looked so deliciously groovy. Regrettably, I still have not seen it, but now I know I married my husband for a reason. He has several of these videos and we’ve been digging them out of our boxes of VHS (of which we have many).

He actually had just stumbled across his copy of The House that Bled to Death when I asked to be a part of this blogathon. It was all kinds of kismet and stuff. I was really excited to finally sit down with one of these Hammer TV episodes to see what all the fuss was about. 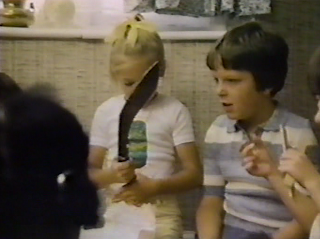 OK, OK, fuss may be a bit of an overstatement. Both series have always garnered mixed reviews and even the fabulous tome A History of Horrors: The Rise and Fall of the House of Hammer said this of both shows:

The premier incarnation of Hammer House thrashed about in the treacherous waters of an ITV network slot that seemed to come and go with an unnerving suddenness. With its faddish affection for punning titles, the series veered between a committee concept of classic Hammer Horror – Guardian of the Abyss, Children of the Full Moon – and a hodgepodge of derivative shockers that ere more akin to reject episodes from an Amicus portmanteau production – Silent Scream, A Visitor From the Grave (from a script by John Elder), Rude Awakening. Two of them were genuinely frightening; the rest were frightful. Style and content were overhauled during shooting when it was realized that a problem would arise with the American networks over the explicit nudity and the less-than-explicit gore, and the watering down that resulted diluted the second batch of shows to such an extent that they became indistinguishable from any other TV Mystery Movie of the Week.

Wait, did I just see a diss on the Movie of the Week? Tsk, tsk. 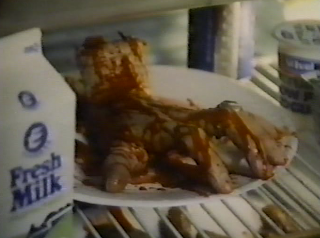 Granted, with the exception of the current batch of basic and pay cable programming, which has the ease of lax FCC rules, television will always play second fiddle to theatrical releases with regards to sex and violence. Don’t get me wrong, I dig both, but I also love being creeped out, and sometimes it’s OK to fade out before a love scene. It’s worth noting that some of the most popular American horror films at the moment are ghost stories that actually avoid excessive violence and are practically absent of sexy sex (you can read about how TV movies influenced Insidious here), so maybe it’s time to reassess the Hammer shows? 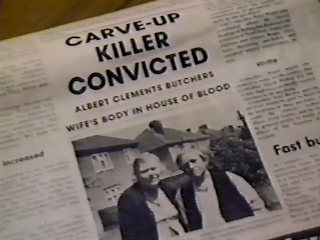 Despite some critical disdain, The Hammer House of Horror episode The House That Bled to Death has attained a cult status, thanks to the infamous party scene featuring a pipe that spews blood (thinking back, this may have been the inspiration for the blood shower scene in This House Possessed). Although toned down for the small screen, the scene is still quite bloody and definitely disturbed. And the story itself is pretty dark stuff. In short, I loved it.

The premise is simple and sweet: A charming young family moves into a ramshackle house with a morbid history. The last tenant took a small sword to his wife and did away with her but good. Now it seems the ghosts of the past are still lingering around the Peters family, slowly driving them insane. After a dead cat, randomly freaky appearances of knitting needles, body parts in the fridge and the aforementioned bloody, er, birthday party, a convoluted but clever twist occurs and, on top of that, one more twist brings the film to a close. 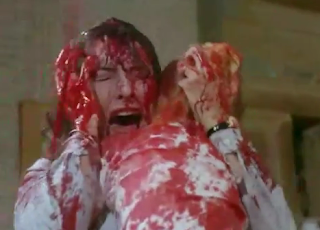 It’s almost impossible to say anything else about this movie since it would seem everything is either haunted house – which has already been discussed – or a twist, which should not be discussed so you can either be pleased or miffed by the end results. Although I thought the twist was interesting and unique it did not make the film for me. What works best about The House That Bled to Death is the buildup, which is done rather well, and left me wanting more.

Honestly, that's the sign of good TV. The House that Bled to Death would have been pretty fantastic at a TV movie running length. The dilapidated house and all of its contents have the makings for a creepy good time! 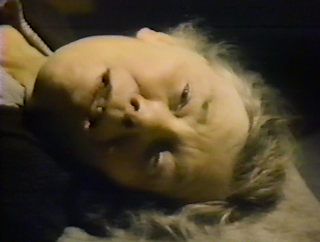 As of this writing, the mister has located our copy of Carpathian Eagle, so guess what’s just hit the top of my To Watch pile?

A couple of years ago I reviewed the Hammer House of Mystery and Suspense episode titled Mark of the Devil with the scrumptious Dirk Benedict. You can read my review here.
Posted by Amanda By Night at 7:24 AM 4 comments: 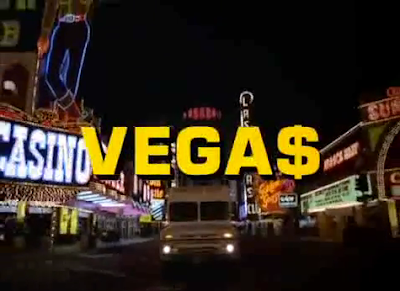 If you ever visit this blog, you can probably guess hearing that my favorite network Me-TV is airing the Vega$ pilot TV movie this week just about shot me through the roof (and back)! Not only do I love retro TV and Robert Urich, but Vegas is where I grew up and I have many fond memories of the stories from my excited friends who would catch Dan Tana roaming around our hood. Urich was a legend in our town. We loved him. I'm sure we still do. I know I do!


Anyway, I'll be live-tweeting the momentous event this Friday at 8 PM EST. Again, you can find me @madefortvmayhem.

This is going to be fun, fun, fun! And perhaps this is an omen that Me TV is going to air the entire run of one of my favorite shows from the 70s? Fingers crossed!

Oh yeah, and look out for the 1979 TVM Return of the Mod Squad on November 1st! Seriously, not sure I can take much more of this!
Posted by Amanda By Night at 7:27 PM 3 comments: 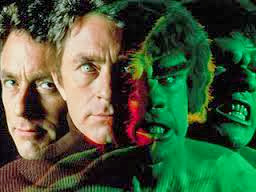 And finally, I read that Remington Steele is getting a new life as a half-hour comedy on NBC. This series will be a sequel to the original hour long drama/comedy/romance series and it will revolve around Laura and Remmy's daughter! Craziness.
Posted by Amanda By Night at 10:50 PM 1 comment: