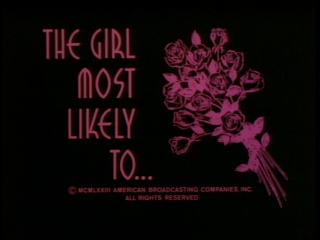 
Believe it or not, there was a time when Joan Rivers was actually funny. I know, it's definitely a hard statement to take in, knowing now what we do about her plastic surgeries and her snarky "witticisms" at red carpet events. But at one time, all of that apparent anger which she fueled into her humor was biting, timely and yes, very funny. Rivers wrote two effectively humorous movies the 70s, Rabbit Test and this. OK, I saw Rabbit Test when I was a kid and thought it was hilarious. The rest of the world - not so much. But I'll stick to my guns here. She was funny! Perhaps The Girl Most Likely To... worked because it was a personal film about being the odd-nerd-out, which was a big part of Rivers' shtick back then.

The amazing Stockard Channing is Miriam Knight, a frumpy but smart and funny college student. Well aware of how far beauty takes you, Miriam watches the beautiful people (including Larry Wilcox, Larry Manetti and Susanne Zenor!) from the sidelines and when she tries to be one of them, things fail miserably. Taunted by several of her schoolmates (and her overweight fiancé - whom her parents kind of promised her to), she becomes the ultimate butt of the joke and learns the hard way that her life is one amusingly sad tale after another until she discovers that she has a talent in acting. Given the lead over evil Heidi (Zenor in a fantastically bitchy performance), the bad girl finds a way to make Miriam the perfect picture of lame. After the big fiasco, Miriam crashes her car. Several surgeries and one horrible body cast later, she is a beautiful woman.

The two faces of Miriam Knight: 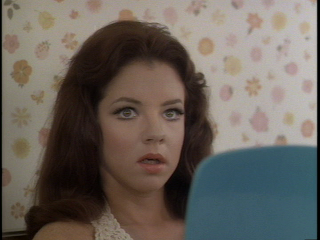 Fueled by a deep seated revenge and armed with hot pants and the brilliant brain of an ugly girl, Miriam sets about dispatching all those who did her wrong. Along the way, a cop named Detective Ralph Varone (Ed Asner being his usual awesome self) is hot on her trail... or tail as it were because as Varone searches for justice he finds himself falling for the killer's brilliance. If only Miriam had met him before she started killing! Ah, but things don't end all that badly for Miriam and it sure is fun watching her get there! One of the best made for the TV movies of the 70s, Girl is bitingly acerbic, side-splittingly hilarious and wonderfully acted. In short, it's a goddamn classic. This is the first film I saw Stockard Channing in and I have loved her ever since. Her voyage from nottie to hottie is seamless. I think even at a tender age I was floored by how well she embodied each version of Miriam, and was thrilled to see that Channing was in fact, a total babe (who gets better with age too!). Her comic delivery is fantastically spot-on, while still evoking heartbreaking agony at her constant rejection. I guess it's the fantasy all of us outsiders have; only Channing does it with a kind of style, grace and wit that I'm still acquiring. And frankly, I was just hoping to go all Carrie at the prom anyway, this whole plotting-your-revenge-brilliantly is just too hard!

Available on DVD, it's amazing to see that someone out there thought enough of this awesomely entertaining but oft-forgotten flick to give it a second chance on a new audience. I do hope all who have missed this fanciful revenge tale will pick up their copy now. You won't be sorry. Email ThisBlogThis!Share to TwitterShare to FacebookShare to Pinterest
Labels: comedy, made for tv, thriller, white hot

One of the best!