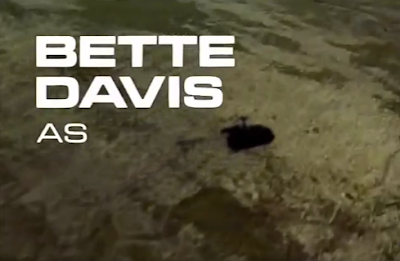 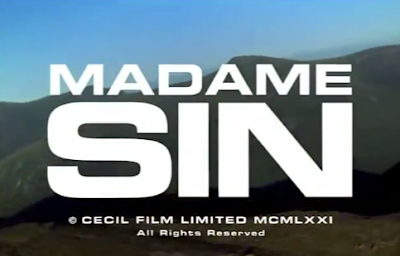 Sometimes you run into something so (wonderfully) bonkers, you are left a little beyond words. When the thing that is loopy happens to be a TV movie, you can sometimes count on the late great Alvin Marill to help clear things up. To quote his entry from Movies Made for Television on the 1972 telefilm Madame Sin:

In her initial movie for television, Bette Davis is a ruthless, all powerful mystery woman who abducts an ex-CIA agent and forces him to help her steal an ultra-modern Polaris submarine.

Thank you Alvin, this gets us started. I mean, sure that description is outlandish, but where does the bonkers come into play, you ask? Well, first of all Davis is a half-Asian evil-doer residing in a Scottish castle. She has holograms of musicians playing enormous round harps, and her underground laboratory looks like the sinister workings of a Progressive auto insurance advert!

To help her along the way is the aforementioned CIA agent, Anthony Lawrence (Robert Wagner). He’s kidnapped somewhere in London by two women dressed as nuns who use the aid of a strange sound wave machine to throw Lawrence off his game. Out of sorts, he is flown to the castle, where he’s manipulated by a new programming device that works almost like a dog whistle, but with human-recognizable sounds. Turns out Madame Sin once had a tumultuous affair with Lawrence’s father and feels she can influence him with her familiar ties. To a degree this works, but the wicked Madame can’t stop herself from resorting to even dirtier tricks, which involve manipulations so wonderfully evil that it would impress the likes of the greatest small screen love-to-hate-them villains (JR Ewing, I’m looking at you!). And don’t forget, she delivers these emotional and physical blows to her opponent complete with false eyelashes and the bluest eye shadow I have ever seen! The fab obviously elevates her duplicity another notch.

Madame Sin commits all kinds of villainy, from faking deaths, to stealing and selling submarines for 1 billion dollars. But she’s at her best when she’s remembering her love affair with Lawrence’s father. She makes jokes no one quite gets ("we spoke only in Croatian!" har har?) and frankly, gets all bent out of shape that her lover never mentioned Miss Sin to his son. So, what does she do when she gets mad? She renders Lawrence deaf and throws him to the wolves of Scotland, which is really just a bunch of tourists who don’t want to be bothered with helping anyone. Evil, I say!

As mentioned in Marill’s concise review, Madame Sin marked Bette Davis’ small screen movie debut. This TVM has an interesting history in that it was sold as a pilot film for a sadly unrealized US series, but was scheduled to play theaters overseas. Watching the unfortunate fate of Lawrence, one has to wonder if the series was meant to star Wagner at all, or if was going to follow the exploits of the great Madame (OMG. What did we miss out on?!?).

Shooting began in February of 1971 and the film generated some decent attention in England, where part of the film was shot. Bette, like all great divas, seemed to enjoy the response, but was quick to give credit to Madame Sin’s director, David Greene, whom she referred to as “brilliant… but different” in an interview she did for Sight and Sound magazine. She also enjoyed working with Wagner, who was also a producer on the film. In another interview appearing in Variety, Davis said that Wagner was “a very bright lad.”

Davis also felt that despite forty plus years in the biz, she was working on a role that that was fresh. In her interview with Sight and Sound she said, “This film is a new experience for me. For one thing, it‘s a crime fantasy and usually I like to find some way of relating to my characters. But how can you relate to someone as outrageous as Madame Sin? So I have to invent all the time. It’s fun.”

True to her words, Davis looks like she’s having the time of her life. And that sense of fun isn’t just contained by Davis’ extravagant performance (complete with one of the best sashays I’ve seen in a long time. In short, she’s werking!), it can also be seen in the great Denholm Elliot, who plays her right hand man, Malcolm. He actually seems to be having even more fun than Davis (and was probably just giddy being in the same room with her). It’s impossible not to notice that subtle half grin that appears with some of his best dialog delivery!

Madame Sin: It’s so disappointing to beat men. They never admit when they’ve lost. Unlike myself. But I’m never faced with the problem of losing because I always win.

Malcolm: Well I’m with you. That is if I understand you correctly, which seems highly improbable.

While the film can seem a bit campy with its strange premise and flamboyant dialog delivery, it had some serious money behind it. Davis’ simple yet outrageously gorgeous wardrobe was designed by the great Edith Head, and aptly places Miss Davis in head to toe villainous glamour! Madame Sin was shot mostly around London and at the famous Pinewood Studios, with some other exteriors shot on the Island of Mull in Scotland. Madame Sin’s gorgeous castle came courtesy of Glengorn Castle (aka Castle Sorn). The acropolis is not just a tourist attraction, it’s now a bed and breakfast!* In short, this film is an oh-so-70s feast for the eyes, and a mind-blowing treat of strange, and wonderfully bizarre filmmaking. While it isn’t a copycat of Wagner’s 1967 TVM How I Spent My Summer Vacation, that colorful and awfully fun comedic spy thriller would make a fantastic double bill with Madame Sin!

Unfortunately, despite the positive press the film received while it was in production, London critics weren’t so kind with the final product. Richard Combs of London’s Monthly Film Bulletin remarked that Madame Sin suffered from a “dull script, a wooden hero and an abysmal ending.” The film opened at the Astoria in London’s West End and pulled in a respectable but only “Okay” box office of $8,556 (according to Variety). It was the replacement for Anthony and Cleopatra, which had grossed half as much the week before. Therefore, I call it a success!

Its premiere on American television went over much better critically, although Davis’ TVM debut didn’t set the world on fire (shame on us!). Kevin Thomas of the LA Times said Madame Sin was “lots of fun,” and he enjoyed the “handsome production.” Still, the ratings were average, and the TVM drew an 18.4/24. Not horrible but much like its West End run, it was only OK.

This was actually just one of two pilot movies Davis shot around this time. The other was The Judge and Jake Wyler (NBC, 12/2/1972), which was a Levinson/Link telefilm (they created Columbo). Davis tones down the glamour in the role of “The Judge,” and doesn’t spend much time doing much of anything except talking the phone. Of course, Davis’ star shines in any role, but if I were to pick one show to go to series, it would be hard to turn down Davis’ unforgettable strut as the evil Madame Sin. 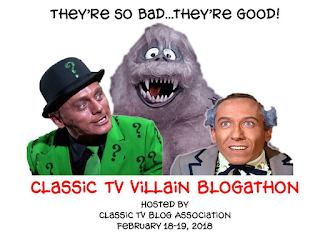 This blog post is part of the Classic TV Blog Association's Classic TV Villain Blogathon. Get the full list of participants with links to their articles here. And, enjoy!

*And thank you to Gore Blimey from the Trilogy of Terror podcast for helping me with information regarding Glengorn Castle. You're the best!
Posted by Amanda By Night at 11:17 PM

I've been in love with this movie since I first read about it in the early nineties. It's by far my favorite Bette Davis performance.

In a perfect world, this would have been picked up and run for years. It would have made an amazing inversion of episodic TV of the time, with all the guest stars playing heroes-of-the-week trying to stop Madame Sin's latest plan. It wasn't quite fanfic, but a friend and I once put together a wishlist of 26 actors to play secret agents, private eyes, and amateur detectives in the first season. What it could have been!

So wild! I haven't ever even heard of this telefilm, so it comes as like a hidden secret. Quite intriguing, indeed.

I remember watching this one when it first aired. Like you, when I learned it was an unsold pilot, I was curious as to whether the intent was to craft a regular TV series around a villain. That would have been innovative for U.S. television at the time. Bette was fabulous as the title character and there was a good deal of Sax Rohmer about the whole affair. I keep wishing that someone would resolves all the rights issues and release a boxed set of these classic made-for-TV movies!

Great post! And what a role for Bette Davis! From the Golden Age of ABC's made-for-TV movies, isn't it. Grant is right; it would have been something to see this wind up as a series.

You've inspired me to look for this one! This is so cool. You had me at Bette Davis in a TV movie :D After LOVING Ryan Murphy's "Feud" series last year, it inspired me to think hard about Davis's later career. Your essay is timely for me and other "Feud" fans!

Great post, Amanda. I think I'd vaguely heard of this one from Marill but I don't think it ever fully dawned on me how screwball it might be. Now, I need to see it immediately. I might double feature it with I Love A Mystery. Thanks again!