What could be better than a mini-series with Stefanie Powers?

How about a mini-series with two Stefanie Powers. I kid you not. 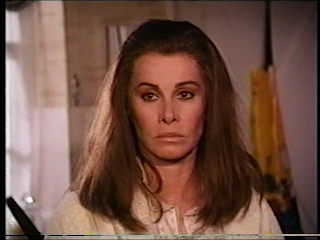 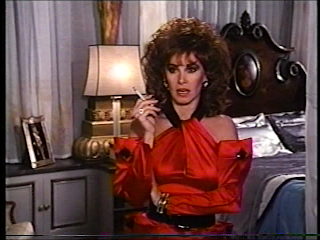 The end result (and a nice split screen!):

Stefanie plays Sabrina (Breenie) and Stephanie, twin sisters who have taken two very different paths in life. Stephanie has settled down and had two kids with her hunky college professor hubby Grant (Barry Bostwick, who is amazing as usual). Her life consists of a seemingly loveless marriage, a part time job at the college bookstore and tending to her young children, one of whom has recently taken up stealing (Jason Miller from Growing Pains. The daughter is played by an extremely young Faruza Balk). She's thrilled when her much more sophisticated sister, Sabrina flies her to Venice for their birthday. On the outside, Breenie is quite enviable with her art collecting gig, closet full of designer clothes, plenty of suitors and a big ol' giant house with a staff! OK, so maybe her life is pretty good. But ask Breenie about it and you're certain to get another answer. This lovely lady has gotten herself mixed up with the seedier side of London's posh scene and finds she is basically a kept woman for the local mobster. He heads out of town for a month, while Breenie and Stephanie head toVenice and hatch their "harmless" scheme... to switch places.

Fabio Testi, a monkey and an ass! Love it!

So off they go, Breenie becomes a housewife (and has a knack for it!) and Stephanie runs around London with one of Breenie's old suitors (played by the gorgeous Fabio Testi from Nothing Underneath). After a car accident, which leaves Breenie bruised, she and Stephanie opt to keep the fantasy up for just a bit longer... but as more time passes while playing this game, the less enticing returning home to suburbia becomes to Stephanie. Then Breenie's mobster boyfriend returns and things take a turn for the worse.

Deceptions is like all of your favorite night time soaps on a more epic level. The scenes in London and Venice are amazing to look at. Gina Lolobriggida plays Princess Alessandra, which should give you a nice clue to how glamorous this movie is. And it's a ton of fun. I put it on expecting to only watch the first half in one sitting and then finish it later. But I watched this little bit of eye candy from beginning to end in one go. Stefanie is great as both girls and gives each just a touch of difference so you can see why someone would confuse them, but you're also aware of each of their unique personalities.

And it's so... 1985. The wardrobe is awesome to behold and the music! Oh, the music! The opening song features "I'm So Excited," by the Pointer Sisters, which sets the pacing for this fun ride. I love a little opulence, but 80s opulence?!? Well, it was just never done better!

And what a great way to twist the escapist "fantasy" so many of us have of a world full of caviar dreams (thank you, Robin Leach!). The lucky girl is the one who realizes that life with a college professor and a couple of kids is far more rewarding than one built on great style, hot men and money. We know that's not true, but what a sweet thought, no?