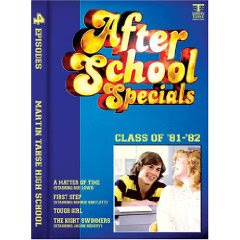 Since my first semester back in college has finally finished, I thought it was appropriate to watch a few Afterschool Specials, because I party just that hard!

Brentwood was kind enough to release several Afterschool Specials on DVD and I popped on the Class of ’81 – ’82 just for kicks, yo – and wow, what a bummer! The first disc featured a mother dying of lung cancer and another mother killing herself because she hits the bottle too hard. Great-googily-moogily! Well, who said the early 80s wasn’t all about the drama. Or is that the glamour? Shoot. 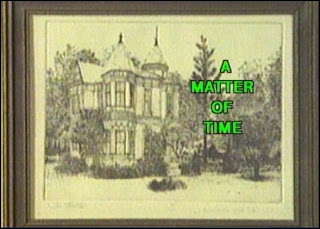 A Matter of Time stars one of my all-time-favorite-actresses-who-doesn’t-work-anymore-but-should-because-she-rocks-so-hard, Karlene Crockett (Diary of a Teenage Hitchhiker, Two Loves for Jenny) as a teen coming to terms with her mother’s sudden and terminal illness. This is serious stuff, kids, and it’s handled sensitively. Not a lot of laughs here. It also features a rather young Rob Lowe (who rocked Schoolboy Father) basically staring at Karlene for long periods of time. Oh Karlene, where are you? 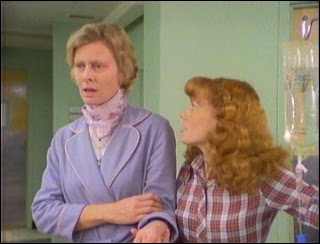 Not cool
The subject matter is definitely bleak and is played out in a fairly realistic way, which is not how I wanted to spend my first week of the Christmas Break, you dig? This episode is less about mom’s death and more about how her daughter learns to accept her new identity in life, and not live under her mother’s fading shadow. Poignant, gripping stuff maybe best served as fodder for one of those rained out depressed days. 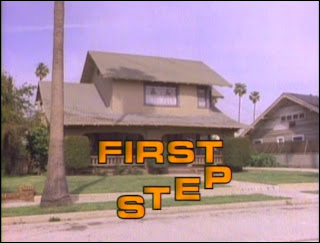 The second episode on the disc is called First Step and features another underrated actress, Amanda Wyss, who is probably most famous for her appearances in A Nightmare on Elm Street and Fast Times at Ridgemont High, Me, I know her best from the awesome killer baboon flick Shakma and for her short stint at the beginning of This House Possessed (aka The Best Movie Ever!). Here she plays Cindy Scott, a wannabe actress hoping to land a part in the school play. She is also tending to her mother’s (Bonnie Bartlett) awful drinking binges. Mom even shows up at school drunk as a skunk during Parent’s Day throwing Cindy into an embarrassed tizzy. And I don’t blame her! Bartlett is top-notch as a lush, where she is sometimes funny and sometimes utterly frustrating. 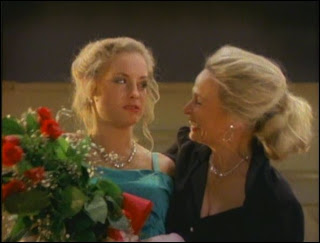 For a good time call Cindy's mom!
Like A Matter of Time, First Step goes for the gut, albeit landing softly, but the episode doesn’t end happily. Instead, it’s about Cindy coming to terms with her mom and realizing that helping her only enables her more. She finds it’s better to let go than it is to try to help someone who doesn’t want to be helped. I love when Mom gets up on stage after Cindy’s debut screaming, “That’s my daughter!” Awesome. 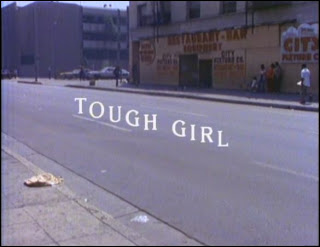 Tough Girl is the third episode on the disc and it’s my favorite. It stars Karin Argoud who looks like Jill Schoelen after a tough weekend. She is best known to me as Vint’s Valley Girl-esque daughter on the original Mama’s Family when it aired on NBC. She didn’t do much past that, which is too bad. She’s adorable and quite talented… 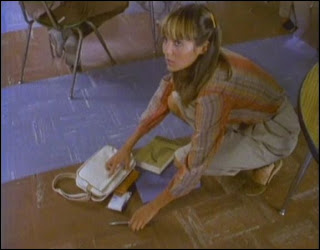 She's a knife-carrying-kulot-wearer. That must be a crime!
Here she’s Renie Lake, a knife-wielding, hard as nails high school kid dealing with her tumultuous broken home situation. After getting busted with a friend for grand theft auto and drugs, she’s sent to live with her suburban dad and his new family. Renie has an extremely hard time fitting in until she meets Jan Redner (Greg Koppel) an adorable wannabe high school vet who happens to also be deaf. But even though he can’t hear, he listens to Renie better than just about anyone and she finally forms a legitimately healthy relationship. That is until she finds out Jan is leaving their little suburban paradise for Penn State in the fall. This sets Renie on a little expedition which she later realizes is her finding herself. Awww Renie, we always loved ya!

Tough Girl works because of Karin’s awesome performance. I mean, she looks really rough, although I don’t agree with everything she does. In a continuing sub-plot Renie basically taunts Wally (played by Laurence Lau who never seems to age!) to a point that is just uncalled for. I mean, yeah Wally is, like, kind of a jocked out dork, but he’s cute and his name is Wally and he meant no harm, Renie. Seriously.

The last episode in the set is called the Night Swimmers and I’ll be damned if I just couldn’t get through it. Sorry Jason Lively, maybe next time! 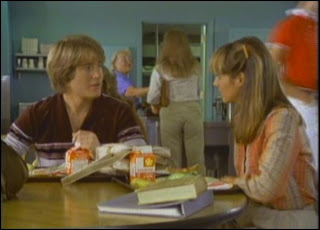 I will totally go out with you Wally!
Posted by Amanda By Night at 3:00 PM

Great post! I love those school house dvds although I haven't gone through them all myself. Always thought they missed when they didn't include the Drunk Driving movie with Val Kilmer and Michelle Pfeiffer. I think it's called "One Too Many." Would love to see that one again! Awesome stuff Amanda!

A few years back I got my grubby mitts on the complete box set of Martin Tahese After School Specials. It was half-priced on Amazon 'casue the short bus it comes packaged in was damaged, and by damaged the cardboard bus wheels were slightly bent.

Anyhows, I love all of three of these, especially Tough Girl, and agree with Lita above that there are some gaps in the availability of After School Specials.

I know CBS had their version with the School Break Specials or whatever they called it, but I would really love to see all of them either put out on DVD or even streamed on Netflix of Hulu.

I wish I had more to say about these, but I've never seen them, though I've definitely heard of them, a little before my time. Still, I'm glad we have your blogs to enlighten us on the angsty early 80's drama of the After-school special!

The source material for "Tough Girl" is a novel called "Will the Real Renie Lake Please Stand Up?" It made quite the impression on the pre-teenage Propagatrix. Worth checking out.