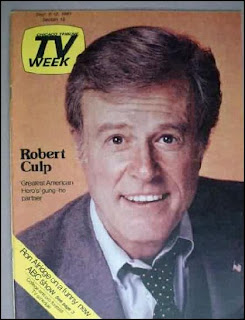 A man's man and one sexy beast, Robert Culp will forever be in my heart for his hilarious portrayal of FBI agent Bill Maxwell on the Greatest American Hero. He may have broke boundaries when he teamed up with Bill Cosby for the excellent progressive action series I Spy, but I'll always remember him as the frustrated and befuddled Maxwell, who always managed to get the word "scenario" into every episode.

Here's a link to my review of The Calendar Girl Murders, which I wrote for Camp Blood.

Mr. Culp was one cool cat. I will miss him immensely.

You and I both. I'm older so my memories tended toward his work in the 60's and 70's (THE OUTER LIMITS, the various guest appearances in various series, I SPY, etc.). But, Maxwell in the GREATEST AMERICAN HERO was why I watched that show later in life. You noted two fine TV movies he starred in, but don't forget the 1974 TV pic "Houston, We Have a Problem". It covered those on the ground during the ill-fated Apollo 13 mission. He was very good in it, too.

So very true, Amanda. Thanks for this.

Every blurb I've been reading upon his sad death has only been referencing I Spy and every time I want to scream, "BUT WHAT ABOUT THE GREATEST AMERICAN HERO????"

I'm a child of the 80s. The Greatest American Hero is where my Robert Culp love lies.

I have mentioned this on a few forums, and no one seems to be familiar with "A Name For Evil". It's a very strange ghost story that he did with Samantha Eggar around 75/76. It's a really slow film, but very atmospheric and trippy, and it shows Culp go "the full Monty"!!

Back in the day I always kind of hoped Culp and Gig Young would do a sequel to "Spectre". And then maybe team up with Leonard Nimoy and Susan Hampshire for "The Baffled Spectre."

Mitch, I have A Name for Evil and haven't seen it yet. I'm not sure I want to see that much of Mr. Culp! :)

Thanks everyone for the nice comments. He was so well loved, it's obvious. I'm glad he's going to be remembered...