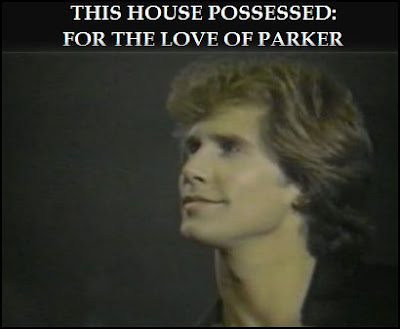 I met Micky Worley through the always friendly comment section of Kindertrauma, but while we shared a love of childhood sufferings, we ended up bonding over our unbridled lust for Parker Stevenson. And through this common obsession, we established a pretty kickass friendship. But I'd smack her down if she stood between me and Parker! But I'm sure she'd do the same! (By the way Micky, I'm kidding, I'm sure you could whoop my sorry behind anyday!)

Micky (aka Mickster) was kind enough to take a few minutes to offer up why she loves House the way she does... and believe it or not, not all of it has to do with Parker!


This House Possessed
Brought to You by the Memories of Mickster
My family always enjoyed made-for-TV scary movies. My dad was the scary movie fan because my mom claims now that she does not like scary movies. Anyway, when This House Possessed appeared in the TV Guide circa 1981, it was a cinch that the Mickster family would be watching. I know personally that I was extra excited since it starred my favorite Hardy Boy, Parker Stevenson (Ahh, the mere mention of his name makes me giddy as a school girl). The movie did not disappoint! Parker is super-sexy singing some cringe-worthy tunes. Lisa Eilbacher is beautiful as his nurse with a mysterious past. I will say that I would not have been pushing Parker Stevenson’s character away for getting a little too fresh the way she did, but that is just the old Mickster fantasizing. The title character in the movie, which is the ultra modern possessed house in question, is to die for…literally. Except for the house killing and/or terrifying all the visitors, it is perfect! If the house let the owners chose whom to kill or terrify, it would be perfect! Someone needs to get off his or her duff and release this spooky classic on DVD immediately! 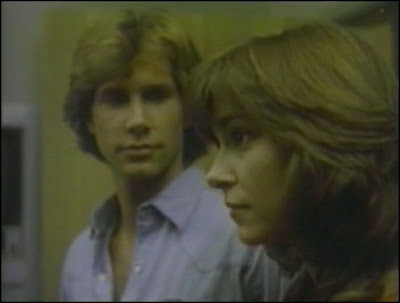 He's so beautiful, she can't even look at him!
There's lots of Mickster-ness to be found at Kindertrauma, but why don't you start with her review of Jack's Back
Posted by Amanda By Night at 8:20 PM