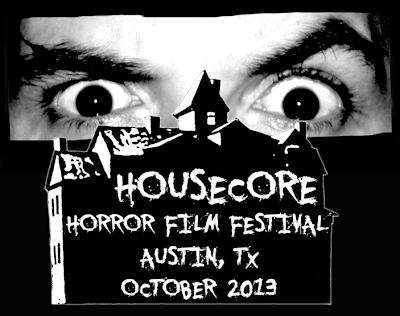 It looks like coolness came to my side of the street this week. I am going to be the Short Films Programming Assistant at a new film festival that is launching in 2013! The Housecore Horror Film Festival is going to be a pretty neat fest, the creators are true crime writer Corey Mitchell and Pantera's lead singer, Phil Anselmo!

I know. Crazy, right? I'm thrilled to be a part of this!

The fest debuts in October of next year and the submission process starts in January. Currently, the Housecore Horror Film Festival has a Facebook page, so sign up early and watch it unfold! I'm all about the excitement!

I also have a new review for an obscure 1990 slasher called Mirage over at Retro Slashers. By the way, did you know that I am the Community Manager for the Retro Slashers' Facebook page?  If you dig horror posters, trailers and lots of slasher convo, please come by and like us!

So, between school, an internship I just started (and love) and all of the above, it's shaping up to be a busy 2012... and 2013! This blog is my heart and I hope to keep rolling out the reviews, news and whatnot. Thanks to everyone who stops by and reads and comments! I appreciate it! I just got a great book that I'm hoping to pull some TV trivia out of, so keep an eye out for that as well.
Posted by Amanda By Night at 7:53 PM

Thank you Trevor! It will certainly be interesting to see what ends up in the fest!

Congrats! Good for you with all the groovy stuff going on!