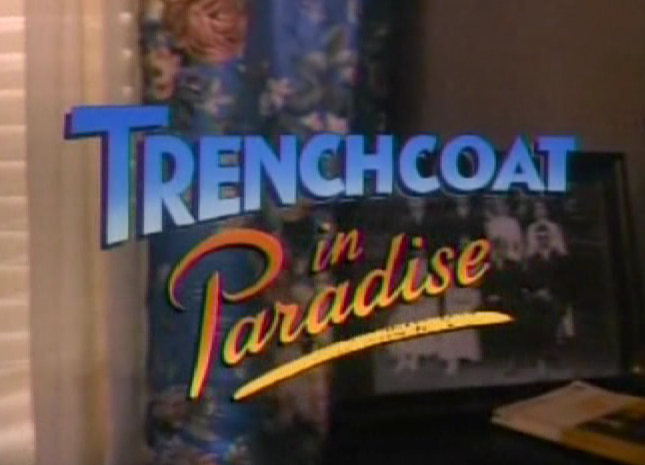 In an interview, Dirk Benedict excitedly explained one of the reasons why he loved making Trenchcoat in Paradise. He mused that it was a departure from the more ensemble-type programming he was associated with and said, “Trenchcoat is the first show in which I’ll be playing the lead.” In a different interview he expressed similar excitement about the potential of the hopeful series and his part in it. Benedict explained the potential charm: “It’s a cross between Columbo and the Rockford Files… It’s the first full-dimensional character I got to play.” (Note: Remember when I went cuckoo nutso over Benedict playing Columbo in a British stage production? Looks like he got an early start at working out his version of the great detective) 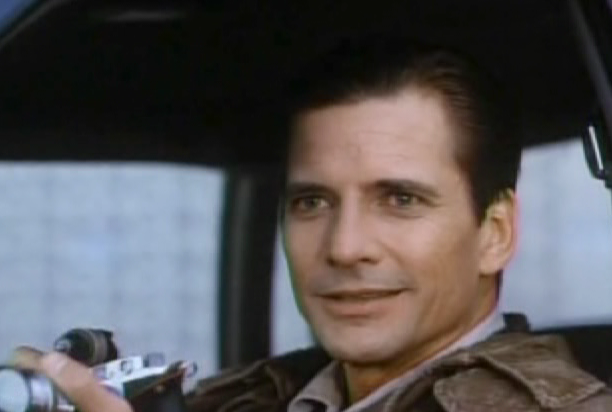 Benedict also likened the show to Magnum P.I., which was a series that CBS was using as a springboard to promote the Hawaii-set Trenchcoat. Hoping it would make a nice replacement for the much beloved and highly rated detective series, the network tested the blue waters with a pilot movie. Unfortunately, despite some wonderful moments that make Trenchcoat seem like it could be an appealing series, the TVM inevitably falls flat. 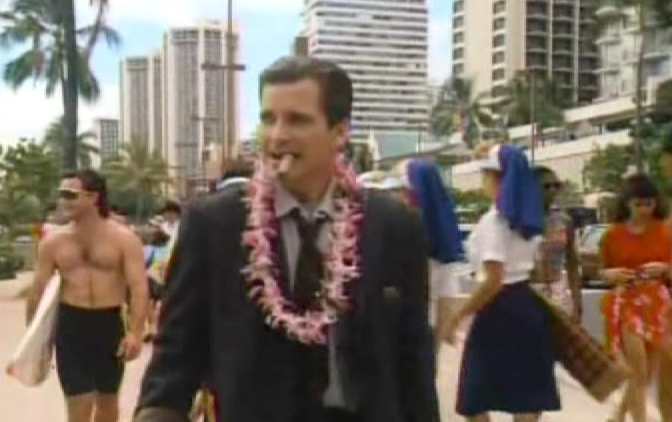 Dirk Benedict is Eddie Mazada, an 80s gumshoe lost to the world of the old 1940s sleuths who enjoy a challenging mystery, but prefer a tasty cigar. Working the streets of New Jersey, Eddie is (somewhat politely) run out of town by the local mobsters. He's is in a good place though because he’s got a few bucks and nothing to tie him down (it’s established that he’s divorced and an absentee father). So, if you’ve got to start fresh, why not do it on the sandy beaches of Hawaii? Luck seems to really be on his side, because as soon as he lands, he manages to buy a detective agency that already has a nice contact list, and a super gorgeous assistant who prefers bikinis to office attire. 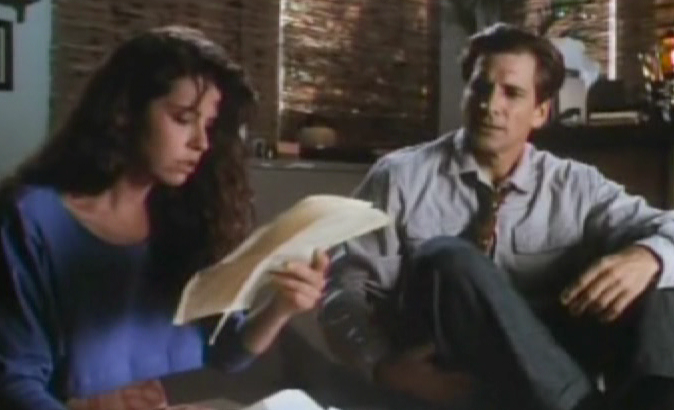 And of course, since we only have 90 minutes, Eddie is instantly thrown into the high profile case revolving around the murder of a wealthy and influential land developer. While the developer’s partner, John Hollander (Bruce Dern) seems the most likely to have committed the crime, the rest of the suspects are far curvier, and seem to generate more interest from Eddie Mazda! There’s Claire (Kim Zimmer), Hollander’s lonely wife. Her five percent ownership of the company creates a swing vote between John and his recently deceased associate. And then there’s Hollander’s sister, Suzanna (Michelle Phillips), a woman who vehemently opposes any land development. And finally there is John’s sexy assistant Lisa (Catherine Oxenberg), who is working her way up the corporate ladder by taking her boardroom meetings into the bedroom (I always love writing that!). 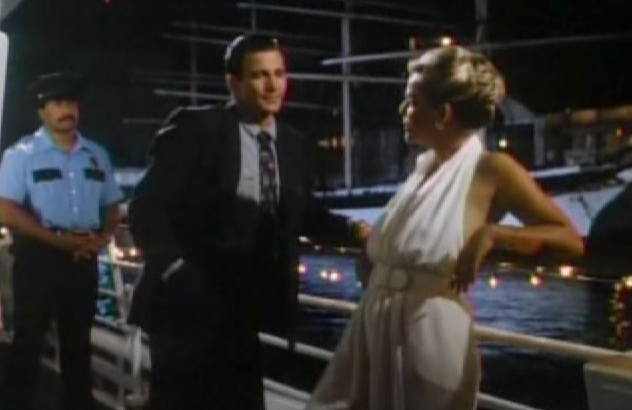 That’s quite a lot to take in, and while Trenchcoat is a mouthful of mystery, it’s not too hard to play along with the disheveled Mazada, a man who refuses to drop his dark suits and trenchcoats on the island. Essentially, this is an update on the classic noir film, with a strong dose of fish-out-of-water antics to bring a few smiles to the game, thanks to Benedict’s indefatigable charm. Unfortunately, neither fully works. 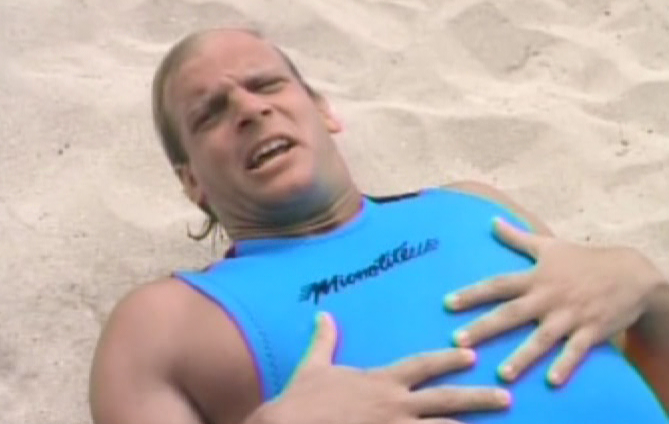 Directed with a gorgeous eye by Martha Coolidge (Valley Girl), and written with a sometimes-charming edge by Tom Dempsey, it’s difficult to say exactly what went wrong. I loved the idea of taking the tropes of the noir, and turning them upside down by placing the protagonist in a light (and sometimes lighthearted) space of volleyball, surfing and luaus, but Trenchcoat never fully forms into anything more than a reasonable time killer. 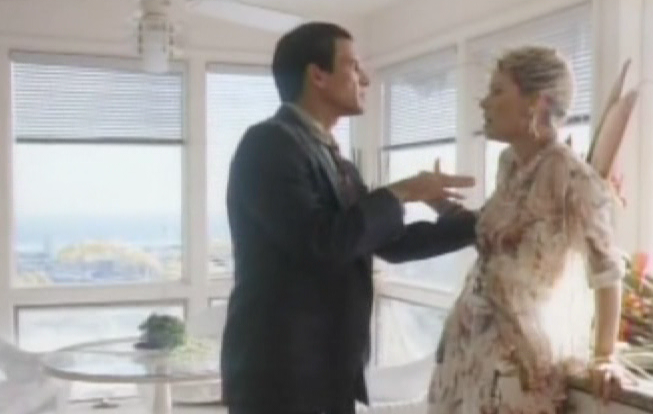 I do love that Benedict sort of rejects his days as Face from the A-Team by playing down his good looks. This is about a down on his luck, but basically optimistic working class Joe who needed a fresh start, and in that respect, Dirk makes Mazada an easily relatable character. The other pleasant surprise was Sydney Walsh as Mona, Eddie’s smart and sexy assistant. Her side story about the missing surfboard is one of the highlights of the tele-film. 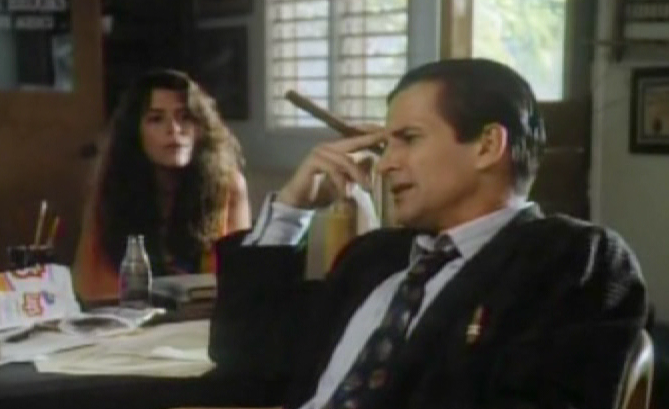 Also, it was weird, interesting and absolutely perfect timing that I just watched Rubdown, because Michelle Phillips and Catherine Oxenberg go femme fatale in that TVM as well (Of the two films, I’m more partial to Rubdown... Sorry Dirk). 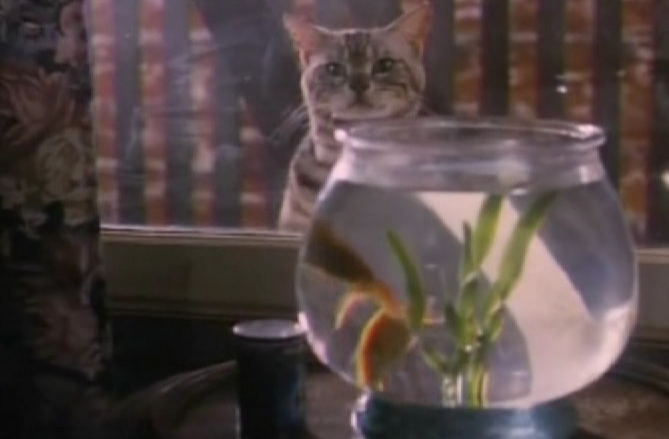