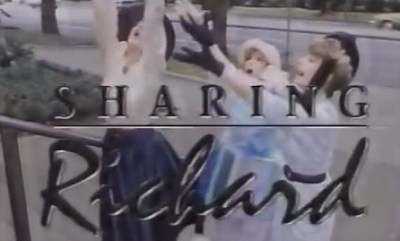 To promote the airing of Sharing Richard, the network released a brief statement declaring the film "explores a timely phenomenon: the shortage of single men for women over thirty." To present the issue, Sharing Richard was designed as a "contemporary comedy," in what may have been a sometimes misguided effort to dissect a topic that was on a lot of minds.

Then, shortly after Sharing Richard originally aired, an angry viewer wrote to the Los Angeles Times, complaining, "The concerns of singles dating are very real and complicated issues. The movie's plot utterly made fools of these four characters whose self-awareness, self esteem and mutual respect seemed to be in the dirt. Women were in their usual role of apologizing for messing things up and the man could somehow spread his "caring" among many women. The movie pretended to have a modern plot but frankly it was a long way from giving any kind of decent message about modern relationships."

The TVMs of the eighties often had a weird relationship with the women in them. Recently, I was just considering how the telefilm, as a medium, has proven to be a rather female-centric space, featuring so many actresses that are often aligned with the genre, such as Barbara Eden, Patty Duke and Donna Mills (in fact, you can hear my co-hosts and myself discuss the topic on this blog's companion podcast). Yet, even with all of those strong women (and I'm talking outside of the Aqua Net and shoulder pads), there was a real tug of war between making female characters independent while having them chase down a hot guy with a good job. The sentimental, Harlequin-esque romance (which I am totally into) sometimes overwhelmed the idea of female independence. This, my friends, is a bit of an issue (although in the context of entertaining fluff like Sharing Richard, a sometimes fun and mostly inoffensive one). It created an uneasy mixture, and it was up to the Eighties Woman (well, really it's up to the actress playing her) to make the whole thing flow and not seem like it was a conundrum at all. Did all of this back and forth confuse my growing brain? Probably, but that's OK. As nostalgic and sappy as I can be, I don't discount that films are time capsules - especially TV movies - that tended to fall on the most prominent contemporary beats to quickly engage the audience - and are sometimes best served by viewing them with a grain of salt.

In short, unlike the lady who wrote to the LA Times, I make excuses for my romance. So sue me.

Sharing Richard, which is ultimately delightful and flawed, walks this fine line in an attempt to bring all of those modern ideas about love and sex into a story about three best friends who exude independence, but are essentially really, really, really about finding Mr. Right. I won't call them desperate because despite their desire for love and marriage, they also come across as contented with their life as is. Of course, all that goes to hell when they realize they are all falling for the same guy! 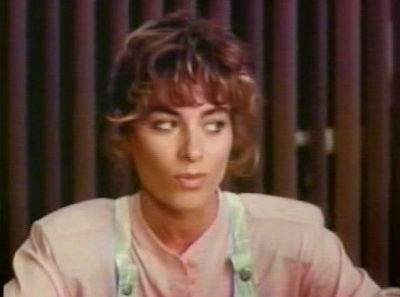 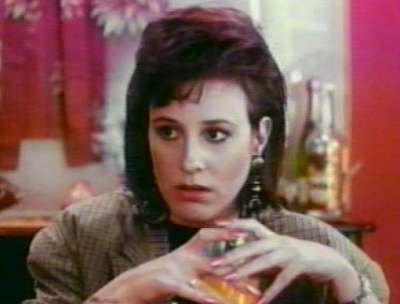 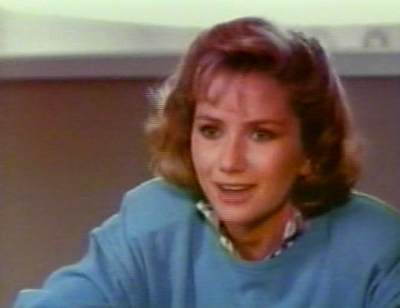 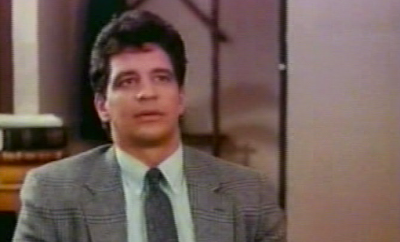 Admittedly, that guy is pretty much everything. And when I say everything you know I'm not overstating this because it's Ed Marinaro. Eighties Ed Marinaro, a few years after Police Woman Centerfold (lord help me, I love that movie), and Laverne and Shirley (btw, is it just me, or is it creepy that Ed played Laverne's cousin and then went on to play her boyfriend... yikes!) . Anyway, Richard is a handsome and charming plastic surgeon who just happens to be recently divorced. While somewhat bitter about his marriage breaking up he turns out to be a great date, fulfilling certain individual needs in each woman. So, why not just pass him around like a great sweater (an analogy a character uses)? And they do. 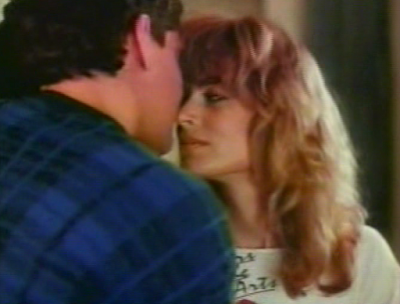 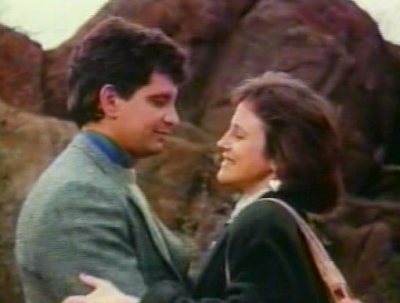 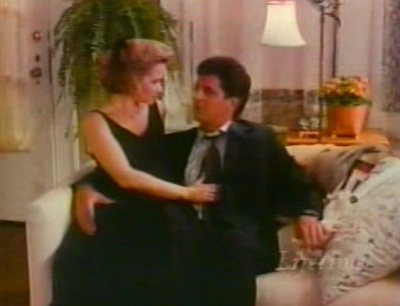 At first it's fairly innocent, but then this thing called love gets involved and the trio of lifelong BFFs find themselves sneaking around each others' backs and growing more and more jealous of whichever friend has Richard on any particular night. Despite the oogie factor that creeps in when two of the friends start having sex with Richard, the film does its best to keep the women likable, and even to a certain degree, Richard, who probably should have been more honest about his dating schedule, but who is also unaware that these women are friends.

Of course, marriage and family were, and remain an important core goal for many, female and male. Still, the women in the TV movies of this era are often obsessed with finding the perfect husband, and having babies (see Babies for a more than obvious example). All of this would happen with characters who were also portrayed as independent and career driven. Certainly, you can have both (and hats off to those who do), but inevitably Sharing Richard is a reflection of the eighties (by way of the fifties) American Dream, which includes the white picket fence and 2.5 kids, but with a dose of second wave feminism that mirrored the career woman who "wanted it all." And, the result is that characters can come across as more pathetic than focused or ambitious.

Luckily, this telefilm goes for the light touch, and has genuinely funny moments, using humor to examine the issues. The trio of leading ladies are amazing, and I was especially pleased to see Hilary Smith, best known to me as Nora from One Life to Live, showing off her adept comic timing. Her character is a bit grating, but the one liners are choice, and her delivery perfect. Eileen Davidson is great as well, and looks amazing (and pretty much the same as she does now). I was not as familiar with Nancy Frangione, and while I feel her character is the weakest of the bunch, the actress does a good job of making her likable.

When these characters become hostile towards each other over a man, it is apparent that the message is mixed and muddled. But some of the humor is timeless, the actresses are warm and Ed... well, he's hot. Despite its flaws, Sharing Richard is worth a watch, mostly for the actors... and shoulder pads, but its also just so damn amiable and more charming than it has any right to be.


The TV spot for Sharing Richard:
Posted by Amanda By Night at 6:53 PM

I vaguely remember this one. Didn't CBS sit on this flick for two years before airing it?
The major networks got out of the TV movie business a while back, leaving Lifetime and Hallmark to carry on. I wondered why they quit. My guess is that TV movies got too expensive. And, networks are always looking to cut costs.