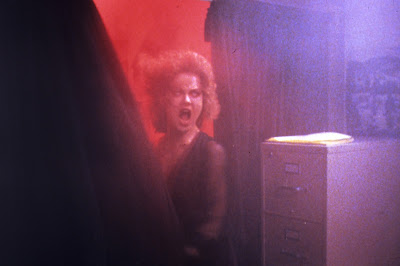 Ummm... can we just call 2017 the Year of the TV Movie? With the release of The Spell, the announcement of The Burning Bed coming out and Music Box Films/Doppleganger Releasing, uh, releasing the most excellent Wes Craven joint Summer of Fear on Blu-Ray, it seems that the oft-maligned telefilm genre is getting its due, and with all kinds of neat bonus features... The love!

Of course, I'm an obvious champion of these movies, and have a particular soft spot for Craven's small screen flicks. I wrote extensively about them in an essay I penned for my book Are You in the House Alone? A TV Movie Compendium: 1964-1999, and I've also reviewed his big three telefilms here, if you want to read my thoughts on Summer of Fear (and Invitation to Hell and Chiller... and you can listen to a podcast episode dedicated to these films as well). I'm so pleased this film is getting a second chance at a new audience, and I should mention it comes with the original Wes Craven commentary conducted on the TV movie's original DVD release from a few years ago. So many great tidbits coming the master himself, a new interview with Linda Blair, and a gorgeous new transfer of a great film! Hooray!

Lisa Holmes, the Director of Sales, Home Entertainment of Music Box Films/Doppleganger Releasing took some time out to discuss the release, which is today, y'all. Go pick up your copy (link above), and leave a review!


Amanda Reyes: Why did Music Box/Doppelganger decide to release Summer of Fear?

Lisa Holmes: We saw it as a diamond in the rough, and a great way to start a new direction for the Doppelganger Releasing label. If you look at our catalog, you’ll see that we gravitate toward what I like to think of as a little interesting and different. Summer of Fear fit that bill for us.

AR: It's fantastic that you were able to acquire the original commentary that Wes Craven did for the DVD release in 2003. Out of curiosity, I'm wondering if it is difficult to procure previously released extra materials that were done for another distributor?

LH: We got very lucky in this instance. It always boils down to underlying rights and with older properties in particular, it can be a difficult proposition.

AR: Wes Craven's TVM work has largely been ignored. I'm wondering if you have any general thoughts on his four telefilms, Summer of Fear, Invitation to Hell, Chiller and Night Visions, and how they fit into his overall filmography?

LH: I wonder about that too. I’m no scholar on the subject, but as a viewer I’ve always been of the opinion that Wes Craven’s work was smart and well-crafted regardless of the medium. I never feel like he dumbed anything down, which makes it more interesting. He was willing to go against certain horror tropes – and clearly with the Scream films had no problem making fun of them too.

I think too, unfortunately because he has passed away, people are taking the time to dig in to the broader scope of his work because there won’t be any more. If you want to look at his work completely, the TV films need to have their due as well as the big theatrical releases. On a total side note, one of the things I love about all four of those projects are the casts. It’s totally worth trolling IMDB to see who was in all of those movies. For Summer of Fear, I knew about Linda Blair and Lee Purcell of course, but Fran Drescher and Macdonald Carey were like the cherry on top of the ice cream with the cake. Bobbi Flekman and Dr. Tom Horton in the same movie? My head just exploded.

AR: I was speaking to a couple of people who work for companies that have released TV movies on DVD/Blu Ray and they said they noticed an uptick in interest in the genre. Have you noticed that as well? If so, why do you think that is?

LH: I remember when the moniker “Made for TV” had a certain quality to it that people looked down upon. Perhaps in these days of truly excellent, original television content, viewers and labels alike are keeping a more open mind and are looking at previous made for television films with a new perspective as valid works of art. Of course, it may be driven too by people in my generation who are feeling nostalgic as well. Member Berries anyone?

AR: I don't want you to give away anything in the interview you conducted with Linda Blair, but can you tell us how she generally looks back on the film, and maybe working with Wes?

AR: Do you have plans to release any other TV movies?

LH: Can I say “stay tuned” here without it sounding like a bad pun?

AR: Do you have a favorite TV movie?

LH: SO MANY TO CHOOSE FROM! As a Gemini, I reserve the right to pick two that come to mind right away. The Boy In the Plastic Bubble and KISS Meets the Phantom of the Park left lasting impressions. Salem’s Lot. How do you stop?
Posted by Amanda By Night at 4:52 PM

Email ThisBlogThis!Share to TwitterShare to FacebookShare to Pinterest
Labels: blu ray, horror, interview, made for tv

Great interview. I hope they do release more, there are SO many just sitting out there waiting to see the sun again.

Never saw Summer of Fear, but I want to!