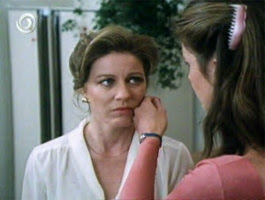 Even at its most sedate (and this is a fairly subtle movie), The Babysitter could still be dubbed... The Crazysitter! That's right. I said it. This nanny is two sticks short of a fire and loving it. The beautiful Stephanie Zimbalist is Joanna Redwine, an enigmatic stranger who gets a job babysitting Tara Benedict (Quinn Cummings). I use the word "babysit" loosely, because this girl is a bit too old to always be seen with a doll! Her dysfunctional but well-to-do parents are played by Patty Duke and William Shatner. Mr. Benedict is a workaholic while the missus enjoys hitting the bottle during her more lonely times. At first Joanna is a godsend. Lovely, hard working and kind, she sort of takes over the Benedict family without much notice (or perhaps they just didn't care...), but then she starts manipulating the family and pitting them against each other. Their neighbor, Dr. Lindquist (John Houseman, great as always) begins to figure things out, but then guess who winds up dead? So, it's just a matter of time before this babysitter goes over the edge...

Visually, this film is quite romantic. The settings are lovely and it's obvious that the Benedict family have done quite well for themselves in their large lakeside home. Zimbalist is just breathtaking, even when she gets a little nasty with her employers. The soft focus lens of the shoot just adds to the dream like quality of it all.

Shatner and Duke are great and in two reigned in performances. There's not a lot of over the top here (minus one stabbing scene that is kind of overdone). Only Quinn Cummings comes across as a little annoying, which is in part due to the nature of her sheltered character (think back to the dolls I mentioned). And Zimbalist does a good job of keeping her character a mystery throughout.

The director of The Babysitter was Peter Medak who also helmed the excellent Canadian flick The Changeling. Although this film isn't nearly as creepy, he uses the same subtle approach to the oncoming horror.

Like most television movies of this time period, there is not a ton of action but there's a great eerie feeling that creeps through the movie keeping it interesting.

Never saw this one, but I saw the Changeling, that was totally creepy! You gotta love how creepy the seventies could be without all the gore and FX.

Just watched this film on youtube a few weeks ago and loved it. There's something incredibly intriguing about an attractive young woman turned mad. Now, say she wasn't as pretty, then maybe I wouldn't be quite as interested(I know, shallow) lol anyway, love these kinds of movies

Stephanie was so beautiful. Even as a straight girl talking here, I like my crazy hot chicks too!

I will watch William Shatner in anything - and like a lot of TV movies - this is a stellar cast - four solid actors - and it gives the actors real scenes to play. Don't get me wrong - I love my action and horror movies - and TV movies could deliver in those genres too - but drama is the backbone of TV movies to me - and they are a fine showcase for some solid acting. Cheers!

There is definitely a lot of subtext in this film. It's also a pretty gorgeous looking flick too. Ummm... I'm thinking I want to rewatch this now! :)