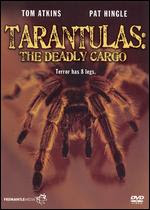 Merry Christmas CBS! A fork load of deadly tarantulas take over a small town in this groovin’ little made for television animals amok flick.

Two coffee exporters (played by Tom Atkins and Howard Hessman!) pick up a load of beans and some illegal aliens from Ecuador and unwittingly also give some poisonous spiders a ride into the good ol’ U-S-of-A. The smugglers and the smugalees are attacked and the plane crash lands in a small Californian town. Due to an unfortunate series of accidents, the tarantulas are unleashed and begin wreaking havoc on various citizens of the community.

Typical of the animal amok genre, there’s a good body count, and although played down, most of the deaths retain some brutality or shock to them. I love the death of the kid because it’s so unexpected.

What I found not to be so typical of the genre was that although there were some naysayers, there really is no bad guy - human-wise that is. The culprit remains the spiders and most of the town rallies together to fight them. It’s a nice touch and helps the characters feel more natural. Sure, Evil Mayor Douglas (Bert Remsen, who is also the overbearing manager of the orange factory! Wow, talk about a small town!) walks around scarily with his cane and threatens to have people arrested, but in the end he does off up his hand. We love the Mayor!

Released the same year as Kingdom of the Spiders, both arachnid amok flicks have nice pacing, unaffected dialog and lots of spider attacks, making them far more entertaining than a lot of the other animals attack flicks (theatrical & otherwise) that skimped on the action and/or interesting characters.

Hats off to Deborah Winters as Cindy Beck as well. Deborah is probably best known to horror fans as the blonde teacher in The Outing. I hardly recognized her with her Dorothy Hamill haircut and was unaware that she had done much beyond that supernatural slasher. She’s good here in what might have come off as another annoying woman in peril role. In fact, the whole dang cast in fun to watch and I really enjoyed seeing Charles Siebert from Trapper John M.D. play a sleazy lothario. I know, it’s hard to believe, but his unbuttoned shirt oozing with machismo offered lots of amusement. So there!

OOOH..Spiders scare me! I missed this one, but saw the William Shatner one 'Kingdom of the Spiders.' That had a bugged out ending. (no pun intended, lol.) This movie sounds a little like 'Arachnophobia.'

I was over at my buddy Rick's house on a Wednesday night and watched the premiere of this flick. I just checked the date - December 28th - so we were on Christmas break from elementary school, which is why I was hanging out at a friend's house til the 10 o'clock news (Central time Illinois youth) on what otherwise would have been a school night. I have some arachnophobia so spider movies always give me a good case of heebie-jeebies. I want to see this again, and I for some reason think I might have a VHS copy in the video vault...

I think I may have seen this when it originally aired as well. But who knows? I think it got some love in re-runs on the local station as well. It's definitely worth a rewatch!