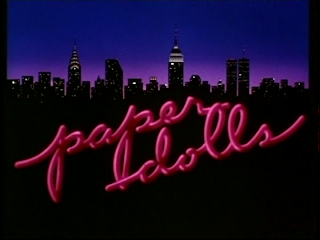 Network: ABC
Original Air Dates: September 23rd - December 25th, 1984 It must have been a very sad Christmas back in 1984, since that was the last night the completely over the top night time soap Paper Dolls aired. With only 13 episodes to its name, Paper Dolls took everything about the world of daytime soaps that I love so much and upped the budget (and neon colored clothes) to make it just that much more glamorous.
Currently, I am on episode 10 and will be sad when everything is said and done. This show so far has had everything from kidnapping, miscarriages, teen models, stalkers, John Waite (yes, John "Missing You" Waite is in two episodes!), photos shoots done like short films, designer sweats, lots of hairspray, loan sharks, porn stars, sex, sex and more sex and Dack Rambo! I could just die!

Paper Dolls' big problem is that there really isn't a bad guy. I mean, Racine (Morgan Fairchild), who owns the modeling agency is a bitch and extremely sarcastic (and afforded the best lines) and her not-so-secret lover Wesley Harper (the awesome Dack Rambo) are slightly evil, but not so horrible they'd start a war in a third world country just to get what they want, which JR did on Dallas. Still, the character of Julia Blake (Brenda Vaccaro) was definitely modeled after Brooke Shield's mom. Her stage mother aggressiveness is pretty incredible, especially when she does it in fur!

Paper Dolls was originally a made for television movie which aired on May 24th, 1982 and featured an (almost) completely different cast. I have not seen that little slice of television heaven, but it gives me something to work towards!
And check out this awesome promo:

I totally remember when this one and I never watched it. All hail Dack Rambo though and I just saw an interview with Morgan Fairchild and she hasn't aged a bit!

And we would not see its like again for 10 years, when "Models, Inc." reared its lacquered head.

Thanks for the comments!

Propagatrix -- I just saw the pilot for Models, Inc. last year or so. I really need to the whole shebang. Models in soap opera situations are hard to beat!

Yes I remember this show. I tuned in for Morgan Fairchild and ended up in love with Terry Farrell. Too bad it's not on DVD.