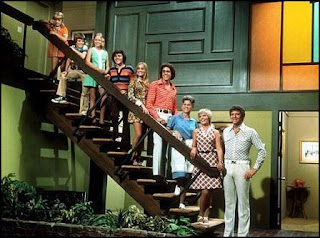 A big thanks to the guys at Temple of Schlock for their Claudia Jennings Blog-a-thon idea. Luvin' it!

Claudia didn't do much on television of note, as most of her stuff was more likened to the exploitation genre fare (and it was awesome), but she did make one very important appearance on The Brady Bunch. It's an infamous episode titled Adios Johnny Bravo, and involves Claudia as a sleazy record producer type trying to lure super clean Greg Brady into a world of pop music without identity. 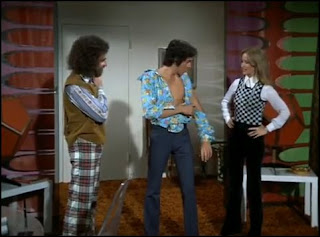 Ummm, shouldn't we be ripping off Claudia's clothes?
Barry Williams who played Greg once said Claudia was the most beautiful woman he had ever seen. And he worked with Maureen McCormick! Actually, Claudia and Maureen became friends later when they made Moonshine County Express. For all the salacious details, pick up Maureen's bio Here's the Story. It ain't pretty, but maybe that's part of Claudia's appeal. She was a woman's woman and a man's woman, alluring to all who saw her. Her poetic beauty still lives as far as I'm concerned, and I love that this Brady Bunch episode endures. It might be the one thing that will keep introducing her to new audiences.

Here is a little picture gallery of Claudia on the Brady Bunch: 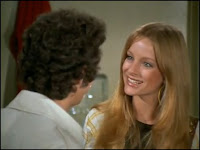 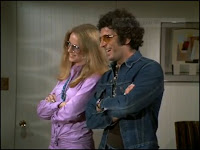 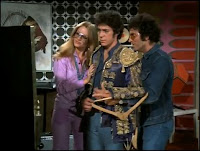 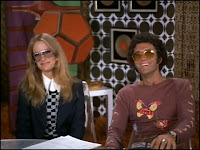 great post - she looks beyond happening in those Brady Bunch pics

Why oh why did I have to pick this month to take a break from the inernet? I would have loved to have taken part in this as I love Claudia so much...oh well, I love this post. I think this is pretty much the greatest half hour ever and I still remember how knocked out I was by it the first time I saw it as a kid. I return to it all the time and I am still wowed everytime....I have to know, what did Maureen say about Claudia in her book???

Claudian Jenning also appeared in TV shows such as The Streets Of San Francisco, Cannon, The FBI, McCloud, The ABC Movie Of The Week and Barnaby Jones.

She was known as Queen Of The B Movies

in some photos, she looks exactly like farrah fawcett or shelley hack... she would have been a much better choice than the bland and amateurish tanya roberts for the last angels slot

I like Tanya alright, but yes, Claudia would have been a great choice as an Angel and I'm sad it never happened!

I'm shocked at how much she resembled Shelley Hack in these photos. Yes, I think she would have been a sexier and more appealing angel than the pneumatic and anemic Tanya. Claudia Jenning's sure to beat Tanya, too, in the soft-porn front where Tanya wallowed after her much ignored stint as an Angel