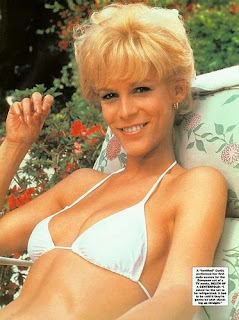 The folks at Warner Archives are at it again! Yes, no promotion, but lots of goodies. Check out the latest:

Death of a Centerfold: This is a fairly accurate account of the life and death of Dorothy Stratten. Peter Bogdanovich actually said in his book about Dorothy called The Killing of a Unicorn: Dorothy Stratten 1960-1980, this was better than Star 80, although personally I think he just found it a bit easier to watch (he was dating Stratten at the time of her murder). It's a pretty stark little movie with odd casting, but Jamie Lee Curtis is great and it's an above average TVM about a very tragic figure in pop culture. Highly recommended.

Jack the Ripper: This is the awesome mini-series featuring Michael Caine and Armand Assante. The filmmakers were so certain they knew who committed Jack's horrid crimes, there's a little name dropping at the end. But I'll never tell, you'll have to watch the movie to find out!

Man From Atlantis: This is the pilot movie for the short lived show starring uber-sexy Patrick Duffy (with webbed hands!) alongside uber-sexy Belinda Montgomery. He is the last known survivor of Atlantis so you know adventure ensues!

In Other Must See News: 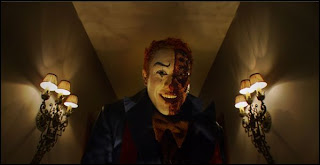 Who doesn't love a good scary clown? Well, this isn't a made for television movie, but I recently caught Darin Scott's newest opus Dark House and it was so very awesome. Click on link for review.

The Must See Streaming Movie of the Week:

It's been awhile since I've done one of these, but if there was ever a time to promote an awesome TVM, now is surely the moment. 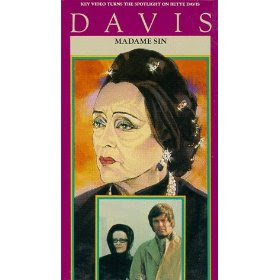 Madame Sin is one of those oddball little flicks that totally defies categorization. But I'll try to give the synopsis here anyway. Basically, the great Bette Davis is an Asian (!) terrorist lady who kidnaps a super spy played by Robert Wagner. She is using him to steal nuclear weapons.

Directed by the great David Greene (Vacation in Hell), this is uber-stylish and somehow completely watchable despite the outrageous (and admittedly silly) premise. Go see this. It's awesome! Click on the link to watch it streaming on Netflix!
Posted by Amanda By Night at 4:55 PM

I so remember watching Man From Atlantis with my mom way back when... she had the hots big-time for Mr. Duffy. I also remember her bringing home that horrible apple-flavored soda that he was the pitchman for(I want to say it was called Aspen). Nasty stuff.

Oh, and Madame Sin is so going to the top of my queue.

I love Dorothy and Jamie but I have never seen DEATH OF A CENTERFOLD before. I will have to check it out...thanks Amanda!

I think Jamie Lee Curtis is a fine actress...the Man from Atlantis?? Wow, I remember seeing that as a little kid and never finding it again, maybe they'll have it on Netflix soon. And Bette Davis..her roles got crazier and crazier as she got older, I'll never forget the frightened grandma she played in 'Burnt offerrings' chilling 70's film...weren't they all in that era?

Can't wait to see Dark House! Great review, thanks for the heads up!-UnkL

Just watched the Pilot to 'Man from Atlantis' on Youtube...How totally gorgeous Duffy is! I loved it! It was an amazingly good start. I guess i just love shows about displaced people, lol. Must be why I adore shows like The Incredible Hulk, Quantum Leap, Voyagers and others...the people that travel around helping others.
Now I need to start my egg hunt and see if anyone has the entire MFA series for sale somewhere.