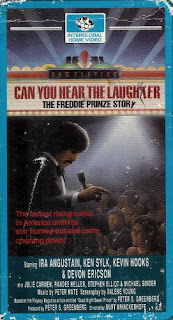 Can You Hear the Laughter is based on Peter S. Greenberg’s 1977 Playboy article titled Good Night Sweet Prinze, which was adapted for television by Dalene Young (Dawn: Portrait of a Teenage Runaway) and it concentrates on the comedian’s heavy drug and depression problems. It is true that Prinze became one of the most infamous tragedies in Hollywood history, but he was also a delightful performer with a knack for showcasing stereotypes as inherently goofy, which took some of the sting out of them. Laughter concentrates on Prinze’s fall rather than his rise, and by hanging in the darker realm it does a grand disservice to Prinze, because it makes him seem utterly forgettable through the film’s blandness. 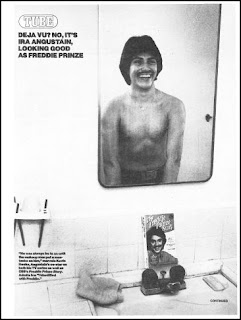 Angustain promotes the movie for People Magazine
The bright spot of Laughter is the cast, who put a lot of heart into their portrayals. Ira Angustain (The White Shadow) is a dead ringer for Prinze whom he idolized. In a 1979 interview with The St. Petersburg Times Angustain said, “When I heard they were going to do a movie about his life, I wanted the part more than anything else.” The California born Mexican American actor even joked with People Magazine in 1979, “Of course I had to learn a New York Puerto Rican accent for the part.” Angustain won the role over such Hollywood big names as Erik Estrada (!) and he does his best, but the character itself is rather one-sided. Randee Heller (SOAP) was especially good as Freddie’s kind secretary Carol, as was actor-turned-director Kevin Hooks who played Freddie's friend Nate.

However, Freddie’s mother, Maria Pruetzel was not pleased with Angustain and when referring to his imitation of Freddie’s standup, she said he was a “disaster.” She also felt the movie delved only into the darkness of Freddie’s life and she told The Calgary Herald that, “he took drugs, he was depressed. But they should have showed him going to his doctor sometimes trying to get help.” Freddie’s parents were actually omitted from the film, which made Maria feel like they were attempting to portray Freddie as “a kid brought up in the streets.” There is very little recreated footage of Chico and the Man as well, and Art Carney’s brother Fred took on the small role of Jack Albertson in the movie. 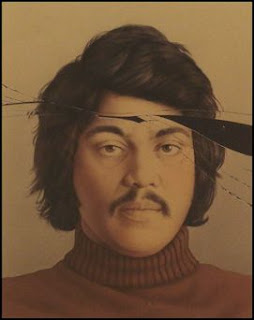 This painting by Alan Magee accompanied Greenberg's Playboy article
Angustain believed that “Freddie was a complicated man who wasn’t the happy go lucky guy he appeared to be in public,” but I think that somewhere between Greenberg’s nihilistic portrayal and Maria’s loving biography lies the real truth of Freddie’s rise and fall, and that’s the film I’d like to see (to be fair, I have not read Greenberg's article). Perhaps no other Hollywood star has risen so fast and fallen so quickly as Prinze’s and there is an important and moving story just waiting to be told, I just wish Laughter had been the film to tell it.

For further reading, here is a link to an incredible interview with Tony Orlando discussing Prinze's death with People Magazine.
Posted by Amanda By Night at 11:09 AM

I think Freddie was, for the most part, a normal guy with a tough childhood. I'm sure he had his good days and bad. From all I've read, Freddie's big demon was success itself. He just wasn't mature enough or self-confident enough to accept the success. In his mind, he was just a funny fat kid who couldn't figure out why people adored him.

He bought into the Hollywood lifestyle and wasn't mature enough to know how to get out of it. Self-medicating, he just went out of control.

His story is heartbreaking, but his talent is long remembered. I can still quote from his comedy album verbatim. We all miss him.

Freddie Prinze was a youthful genius.
Talented and successful. Despite the way his life ended he left a strong positivel legacy. Rest in A Peace Freddie. Your brief life yave us hope &forth joy. I just wish it could have given you that. Thank G-d your son is a success. Despite not being there for Freddie Jr. you were a positive role model.

Freddie Prinze was a youthful genius.
Talented and successful. Despite the way his life ended he left a strong positive legacy. Rest in
Peace Freddie. Your brief life gave us hope & brought forth joy. I just wish it could have given you that. Thank G-d your son is a success. Despite not being there for Freddie Jr. you were a positive role model.