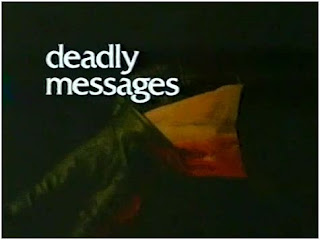 Note: I am taking a short break from Freddie Prinze Week to co-review this movie with my favorite guys at Kindertrauama! Since I'm still knee-deep in boxes at the new digs, Unkle Lancifer was kind enough to loan me the stills for this review. Thanks Unk! And please stop by and check out their review of Deadly Messages!

Deadly Messages is an attractive looking film that is having an identity crisis. Unsure of whether it wants to venture completely into the supernatural, this thriller feels a bit uneven, but despite the disjointed tone of the story, it’s a great deal of fun and one of the best late entry made for TV horror films. 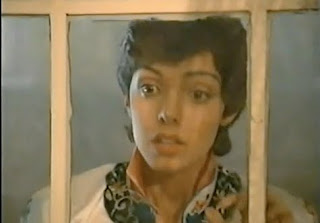 Beller behind bars? Only in my wildest Women in Prison fantasies!
Kathleen Beller is pretty Laura Daniels, a woman who holds temporary employment at a lush (and fabulously 80s) video dating service. Her live-in boyfriend, Michael (Michael Brandon) is a lawyer which explains why her apartment is so damn awesome. This, like, totally awesome girl named Cindy (Sherri Stoner) is staying with them, and man does she know how to crimp hair! Anyway, one night the couple goes out, leaving Cindy alone with Laura’s Ouija board, which leads to all kinds of mayhem. Upon returning home, Laura sees Cindy being attacked and possibly murdered, but by the time she is able to get the police, there is no trace of any problems. Granted, there’s no trace of Cindy either. Before long, Laura starts seeing Cindy’s assailant wherever she goes, but no one believes her. Can she figure out the mystery and save her own life before it’s too late? 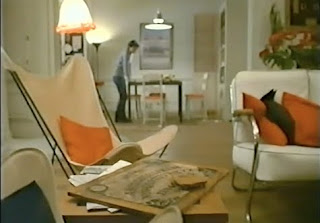 Fah-reaky Wee-gee!
Deadly Messages riffs heavily on DePalma’s Body Double in the film’s two best scenes. The first is Cindy’s attack scene which might not have that phallic drill, but the bird’s eye view does definitely harken to my favorite DePalma film (it strongly recalls Barbeau’s death scene in Someone's Watching Me as well). The second scene is at the mall, and if you’ve seen Body Double, then you know what I’m talking about. Aside from that distinct imagery, Deadly Messages couldn’t be less like Body Double, but it does have that highly glossed sheen that many 80s thrillers had. There is no denying the decade this film was made in, even if the story feels more akin to the old school 70s TV movie. 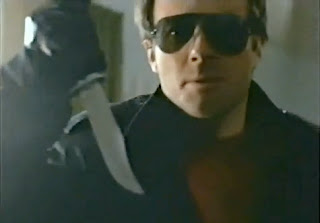 He wears his sunglasses at night
This late entry thriller could easily be a theatrical. It’s got such a big, slick look to it, I was surprised to find out it was made for television when I first saw it eons ago on Encore. The leads are fantastic, but then again Beller and Brandon have yet to let me down. The only problem I have is getting the film from point A to B by dipping into a couple of sub-genres instead of just diving into one and going for it. However, Deadly Messages is entertaining and luxuriant; capturing a sleeker, more sophisticated version of the 80s, where crimped hair may reign supreme, but nary a scrunch sock or stone-washed jean will be found! I also adored Stoner’s performance as Cindy. She’s like PJ Soles on crack and helps open the film with a burst of energy. Deadly Messages does its best to maintain that level of kooky oomph and since it succeeds more than it fails, I give many points to this sly little flick for trying to add some vigor to the dying TVM genre.
Posted by Amanda By Night at 8:02 AM

I love how you bring up DePalma with that Mall scene. It's funny Cuz Dennis Franz plays pretty much the same role in this as he did in Dressed to Kill! Plus DePalma would have approved of the Hitchcock lifts in this movie too! -Unk

Thanks for stopping by guys!

Unk, I love DePalma's eye for setting up scenes. I really feel like DM took a note or two from that (and a scene or so as well!)... Thanks for asking me to co-review DM. Lots of fun!