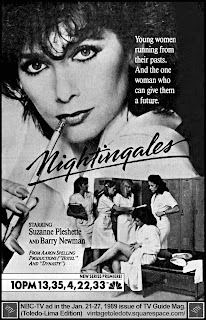 After being ABC's golden child for two decades, Aaron Spelling's contract with the network was cancelled in the late 80s (ABC was jokingly called the Aaron Broadcasting Channel for a time). Spelling still had two shows airing, Dynasty and Hotel, but the network felt he was becoming a thing of the past. Brandon Tartikoff who ran NBC approached Spelling for an idea for a new series. NBC was known for their higher tier programing such as Hill Street Blues and St. Elsewhere and Tartikoff thought something more escapist would help balance the lineup. Spelling gave him a one sentence pitch:

"Student nurses in Dallas in the summer and the air conditioning doesn't work so they sweat a lot!"

Tartikoff loved it! When he brought Spelling to NBC to discuss the new project he actually rolled out a red carpet to his office, gave Spelling flowers and there was even a marching band to perform The Yellow Rose of Texas!

The show would be called Nightingales and it would have a pilot movie and then a 13 episode run. It failed miserably, but points to Tartikoff for not just respecting Spelling's talent but for treating the king of television like the royalty he truly was.

I've never seen Nightingales, and in fact had only heard of it when I recently picked up a copy of the book Three Blind Mice by Ken Auletta (which is where I got this story). Here is the main title sequence, which features aerobics, surgery and Suzanne Pleshette:

Before it aired, when everyone knew it would be a hit, the show was dubbed "the silver nipple!" Gotta love 80s TV!

One more bit of trivia: Nightingales starred Suzanne Pleshette and Barry Newman who also appeared together in the 1982 TV movie Fantasies. You can read my reviews here and here.

By the way, the above TV ad came from Vintage Toledo TV. Check them out, they have lots of great pics.
Posted by Amanda By Night at 4:50 PM

I've never heard of it, but it looks/sounds like a precursor to Grey's Anatomy, Private Practice, and all of those hospital shows that focus more on sex than the actual medical cases.

Spelling was a fortune teller!

Why would anyone want to talk about medicine anyway when there are so many hot chicks around! :)

OMG! I remember Nightingales....mostly because my mother was a nurse at the time & she HATED it. "That's not what nursing students are like!" Good times :D

I think I only saw one episode of it. From what I can remember, the early commercials made it look more like a show about strippers than student nurses.