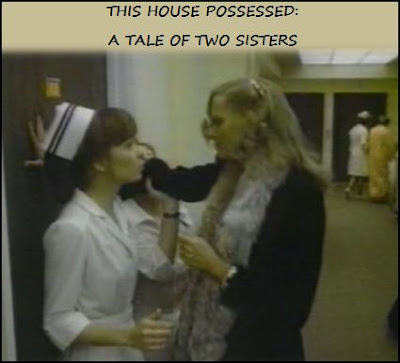 Seriously, who doesn't love a good catfight? While we don't get to see Sheila and Tanya square off too much in House, the potential for squashed white clogs and torn fur stole madness is always there. Carol and Jeanette McMahon are sisters who I don't think get into too many catfights. I feel this way mostly because I know they share a deep love for House, and that has to be the one bond that brings people together... 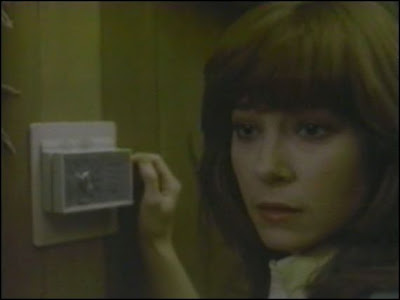 What's not to love about This House Possessed? You've got hotty hot hot Parker Stevenson being a rock star, Shelly Smith being trashy, dopey Slim Pickens, and a super creepy old lady who lives in a shack. I love so many things about this made for TV movie that it's hard to narrow it down for this little retrospective - so I'm gonna get out my vaseline coated skylight filter and sorta generalize in a hazy way.

One of the things I love most about This House Possessed is just how far, as an adult, you have to suspend your disbelief for this movie. I mean, watching it as a kid it all makes perfect sense (and, believe it or not, is actually scary), but as an adult, you really can't think about it too much. You can't analyze it at all. You have to just let if float over you. You have to believe that a house can not only become obsessed with a child, but also has the capability of using any TV in the general area as an ersatz monitor. You have to believe that a woman can be covered in blood that is spraying out of a shower nozzle one minute, and then can waltz out the front door with no evidence of blood on her. And you have to believe, with all your heart, that a house can, within seconds, turn the temperature of a swimming pool up to the boiling point in order to kill a creepy old lady.

Watching This House Possessed makes me yearn for the days when nothing had to fit into a perfect little box to make sense. It makes me get all nostalgic for that feeling of getting lost in a story - any wacky, silly, crappy story - and thinking that every single turn of events is completely and totally plausible. I mean, it is possible for a house to love a little girl and remain obsessed with her as she becomes an adult, and, not only, keep tabs on a rock star in a club through an analog TV set, but also, cause him to faint and then recover from the fainting attack in the same hospital where the grown-up girl now works (and where the rock star can somehow still be monitored through that same TV set), thereby luring the grown-up girl back to the house so as to entrap her there forever. It could totally happen.

Oh, This House Possessed, you always make me feel like a kid again. 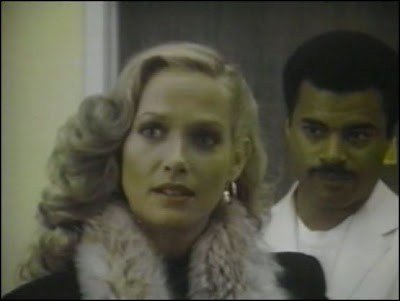 First of all, I was in the Parker Stevenson camp of Hardy Boys fans, so it was destined for me to hold this cheesefest of a made-for-TV horror flick close to my heart. It has everything - hairless chest shots of Parker as Gary Straihorn, a temperamental and questionable rock star (complete with the song "Sensitive You're Not," the one that inspired the embroidered tea towel that my sister made for me); A chemistry-free love story between Parker and Lisa Eilbacher (who also did her time on Hardy Boys), who plays Sheila, a live-in nurse helping him recover from the stress of rock stardom; a simultaneous chemistry-free love story between Sheila (or Margaret, according to the house) and the house itself - a house which is an awesome brown and tan vision of late '70s/early '80s rock star glamour and architecture; Slim Pickins as the affable rock star manager (who doesn't need more Slim Pickins?!); a creepy, cryptically prophetic "rag lady" with smeary lipstick and bottlecap-lensed eyeglasses (played by Joan Bennett, the original matriarch on Dark Shadows); multiple murders that scared the crap out of me as a kid (my favorite being a toss-up between the librarian's electrocuting/crushing gate death and the rag lady's overheated pool death); Sheila/Margaret's final pleading words directed at the house, which is going up in flames, "If you love me, you'll let him go - you'll let me go! Oh, please!" Even Barry Corbin and David Paymer make appearances. What's not to love? 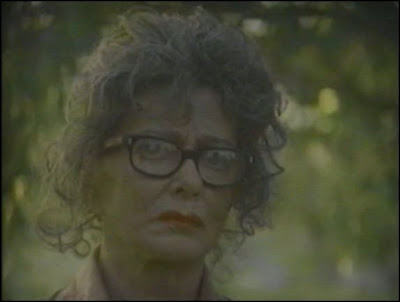 This smeary faced lipstick lady is for you, girls!
Do you know what else there is to love? The blogs these girls run! Please check out Carol McMahon at Craftypants Carol Fancy Crafty World and then go on over to Jeannette's faboo JLMShisksablog for more of the awesome!

And do you know what's even way cooler than that? Here is a look at the ultra-incredible This House Possessed dishtowel Carol made for Jeannette: 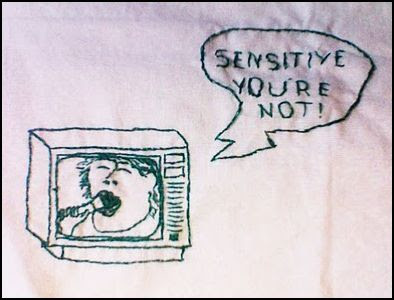 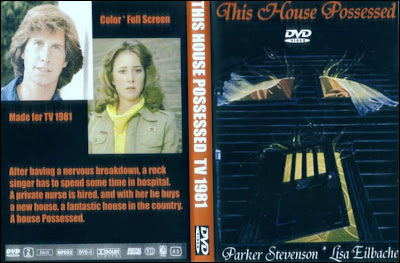 Hey girls, if you ever want to adopt another TV movie luvin' sister, I've got my paperwork ready. And I'm house-trained!
Posted by Amanda By Night at 6:39 PM

You did an awesome job, Amanda! Thanks so much! I'm honored!

This is SO great!! Amanda, I think you're right - we should adopt you into the fold, as you cheeze out with the best of 'em. And the fact that you used the tag "stud" for this post tells me you truly are on Team Parker. (Sorry Carol, she's cool like me)

Thanks again for including our blardy blar in your fabulous blog!