The Rape of Richard Beck airing on This TV this Sunday! 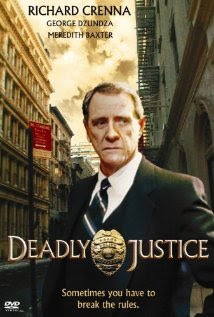 The Rape of Richard Beck (aka Deadly Justice) is a controversial made for television film which originally aired on May 27th on ABC. Directed by Karen Arthur, Beck was nominated for 2 Emmys and one Golden Globe (Crenna was nominated by both organizations). Richard Crenna plays Beck, a tough as nails cop who is completely insensitive to sexual assault crimes. Needless to say, the tables are turned when he is attacked. Beck comes under the same scrutinies he put other victims through and is transformed because of the crime. I saw this movie for the first time about 10 years ago, and I remember it was pretty harrowing stuff, and that was in the early 2000s. I can only imagine what was going through people's heads in 1985 and I commend the filmmakers and Crenna for tackling such a heavy duty subject. It is airing at 3 am on This TV, but I'm not sure if that's only the Eastern Standard Time or not. Check out their site for the deets! For those of you who don't get This TV, you can buy the movie on DVD. I'm kind of surprised that Beck isn't brought up more, as it's fairly unique and it shows that even towards the end of reign of the TV movie, there was still plenty of interesting stuff airing.

(btw, I was just looking at the DVD cover and tagline and I think it does a total disservice to the film. It looks like some action flick. I can only imagine what blind buyers are thinking when they pop it in the DVD player!)
Posted by Amanda By Night at 10:38 PM

sounds very interesting! Thanks for this post, I hadn't heard about this movie before but I'm already looking for it!

I watching it right now here in chicago 2:24 a.m

Just finished watching it I'm glad I stayed up to see it.

Thanks for the comments, and I'm so glad you enjoyed it Anon, although perhaps the word "enjoyed" might not be correct! :)