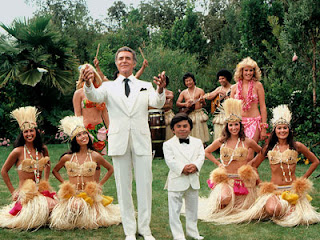 In celebration of mid-terms, I'm kind of cheating this week (ha!) by throwing together something that deserves a lot more attention. Time is becoming less and less of an option for my blog this semester. Ugh. I'm surprised it even still speaks to me.

While I was procrastinating (which I do pretty well), I stumbled across some great promos for Fantasy Island when it became part of ABC's late night roster. I adored Fantasy Island. Still do. For whatever reason, I recently had a memory of how exciting my Saturday nights seemed once Love Boat got rolling (hey, I was an easy-to-please kinda kid!), but after all the frivolity and hijinks on the high seas ended it always seemed something dark was looming over Mr. Roarke's island. Not that I minded, but I did have to shift gears every so often when some weird fantasy backfired. Looking back, the show could not have been lighter, and many of the episodes were every bit as silly as the Love Boat, but I dunno, my 8 year old brain processed it like I was watching a David Lynch movie or something!

Anyone else remember when Roarke went toe to toe with Satan (Roddy McDowall)? Or when Tenille sans Captain headed to the island in search of her true love only to find out he was half-dog/half-man? Or what about when Annette Funicello brought her ventriloquist doll to life, only to find out she was a lot leggier and way more dangerous?

I know! This is good TV peeps.

Ricardo Montalban was simply perfect as Mr. Roarke. Sexy and enigmatic, I remember a friend of mine once saying, "He could fulfill my fantasies any day." We were racy kids. Apparently Aaron Spelling was determined to get Montalban as the star on one of his shows, after guesting on some of Spelling's other projects. Montalban thought he was joking, but Fantasy Island would become the first series for the actor. The show was a hit and lasted seven seasons, running from 1977 - 1984. Montalban's partner in crime, Herve Villechaize left the series in 1983, and the show did not last to much longer after his exit. I think Fantasy Island has held up rather well because it's charming and deceptively simple.What better way to escape from something like... oh, I don't know... midterms, than with this slice of TV heaven? That's a rhetorical question, but I'm sure you know the answer.

Yes, I remember when Mr.Roarke
went toe to toe with Satan. I loved the fact that Mr.Roarke had a mystery about him and always kept you guessing how he was able to do all the things he did.
Yes, Saturday nights back in the day on ABC ruled.
Ricardo Montalban started my who not so secret appreciation for Latino men.

Thanks for stopping by and commenting. Sorry for the delayed response. Glad to see there is someone else who treasured Saturday nights in the 80s as much as I did! And yes, Ricardo = swoon!