An appealing cast and a nice little slasher premise have made Deadly Lessons one of the golden chalices of made for TV horror. Unfortunately, it's not all you would have it cracked up to be.

The ever adorable Diane Franklin is Stefanie, the newest (and apparently poorest) member of a prestigious all girl boarding school. Although she's a good student with a clean record, Stefanie finds herself in the summer program with the more rebellious girls. In fact, the student body is down right skeletal - in more ways than one. With nary two dozens girls, the students start turning up dead or missing and it's up to spunky Stefanie to figure out what is going on... before it's too late. 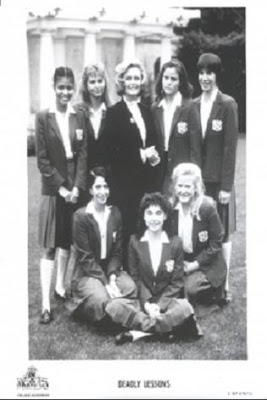 The school setting is great and the cast is simply amazing. Early performances from Bill Paxton, Rick Rossavich, Ally Sheedy and Renee Jones mix with the likes of Donna Reed (!), Larry Wilcox, Tara Erickson and Nancy Cartwright among others.

Too bad the story is dull, dull, DULL. Very little actually makes sense, especially the reactions of some of the students after the murders. I think the director had some idea what he was up against because he piles on so much music, it's sensory overload. The score is downright hilarious with it's overtly melodramatic tones, but it does keep you awake.

When all is said and done, Deadly Lessons certainly isn't the worst TV horror movie ever made. Not by a longshot. The word here is unfulfilled. There was great potential in Deadly Lessons and a lot of what shines through is the cast's eagerness to put on a good show.
Posted by Amanda By Night at 7:35 PM

I saw this one after the initial airing, but before I knew who most of the cast was - need to see it again then!

This is one I definitely want to revisit. I always good things about it. Maybe I saw it on a bad day. And yeah, check out that cast...