If I may be so bold and speak for the silent masses of made for television movie nuts (I know you’re out there!), I think one of the reasons why these movies remain so enduring is that the scares are predominately organic. No bad computer effects (well some, but in that fun, kitschy way), and a lot of reliance on tradition made these films simple but good. Maybe simple isn’t the right word, let me say classic. And who wouldn’t take Audrey Hepburn over Kim Kardashian? I mean, really…

Thing is these movies might have had to confine themselves to stricter guidelines but they still managed to be effective. Even more so, the era of the made for television movie spawned some pretty freaky characters. When I made this list, I had well over ten. But at the same time, narrowing them down was child’s play (and I don’t mean the game show with Bill Cullen!). It was pretty apparent which ones left the most unforgettable impressions on this latch key kid. I hope you agree with some of them!

10. Death Car on the Freeway (1979): The Freeway Fiddler – If any director knew his way around a racing car, it was Hal Needham who directed this, Cannonball I & II as well as Smokey and the Bandit. Here we’ve got a serial killer who uses his car as the weapon (I said it before, but you just know this movie had some kind of impact on Quentin Tarantino’s excellent thriller Death Proof!) and it’s up to one spunky reporter (the lovely and talented Shelly Hack) to capture our elusive killer. My good friend buzz at Camp Blood wrote a pretty great little capsule synopsis of it, so let me direct you there for more info!

9. Satan’s Triangle (1975): Eva – Without giving anything away Eva (Kim Novak) made this list based solely on the last few frames of the criminally underrated (and oft unseen) tele-film Satan’s Triangle. The film as a whole works even without these chilling moments, but those last seconds are guaranteed to put you over the edge!

8. Night Terror (1977): The Killer – Night Terror might be the worst movie on the list. Well, there’s no might about it… It’s portrayal of hapless Valerie Harper is silly and plodding at best, but Richard Romanus’ depiction of a character simply named “The Killer” is unforgettable and terrifying in every way imaginable. A neat bit of characterization – The Killer speaks with a vibrating larynx box. This movie scarred me for life! And I loved it!

7. Salem’s Lot (1979): Kurt Barlow – Our small screen vamp evokes the unforgettable image of the original Nosferatu in all the right ways. In this cherished Stephen King adaptation, Reggie Nalder's creepy Barlow is the money shot worth waiting for.

6. Duel (1971): The Truck Driver – Duel topped my Top Ten Must See Made for TV Films of the 70s. I mean, it would be nuts if it hadn’t. Duel is by far the most appreciated, revered and enduring of television horror films and that is thanks in large part to the malevolent truck and its unseen driver. You never know why its following Dennis Weaver across a desolate highway, but it's also impossible to peel your eyes away from one single frame.

5. Don’t Be Afraid of the Dark (1973): The Demons – I swear this list doesn’t totally mirror my Top 10 TVM list, but there are a lot of similar titles represented here. How could I face myself in the morning if I skipped these little demons that look like they are wearing hard hats covered in latex? They are adorable and totally freaky all at the same time. With the use of simple camera trickery, these little guys made a big impact on me in my younger years. And just imagine how Sally (Kim Darby) felt about them!

4. Gargoyles (1972): The Gargoyle – Bernie Casey wowed and terrified audiences as the main Gargoyle in, you guessed it, Gargoyles! The incredible costumes and make up (some of which was supplied by the late Stan Winton) remain untouchable in a world of overused CGI. Simple, a little traditional and extremely effective, Casey disappeared into the character with his fantastic get-up and a little futzing with his voice. When he says “Read to me Diana, your voice pleases me,” you’re a little bit petrified and a little bit in love with the intelligent creature who is just trying to survive. Click on title for the whole review. 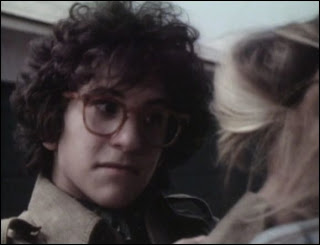 3. Bad Ronald (1974): Ronald – Bad Ronald also made my Top 10 TVM list, and again it was the character of Ronald that landed it squarely on there. Scott Jacoby’s mesmerizing performance of a disturbed lost soul was just one of several amazing performances he lent to the small screen, which also included Smash Up on Interstate 5 and That Certain Summer (for which he won an Emmy). As Ronald, he scares the pants of you while also eking out a weird sense of compassion for him. With his deep sense of instability comes a longing to fit in and to still be loved by his overbearing mother. Click on title for a full review.

2. Legend of Lizzie Borden (1975): Lizzie Borden – An unforgivable oversight on my other list, I decided I would not make the mistake twice and had to include Elizabeth Montgomery’s absolutely chilling performance of accused killer Lizzie Borden here. The movie methodically lays out the evidence against Ms. Borden and takes it one step further, showing what may or may not have happened on the fateful day that Borden was rumored to have taken an axe to her father and step-mother. Not only did this movie mesmerize viewers, it gave Liz Montgomery a new lease on her acting career and she dove deeply into dramas afterwards.

1. Trilogy of Terror (1975): Zuni the Fetish Doll – I keep saying it, but perhaps no other creation has left such an indelible mark on young horror fans as the Zuni Fetish Doll. Featured in the last segment of Trilogy of Terror, Zuni was one bad ass dude who would stop at nothing to end Miss Karen Black. I know we’ve all felt that way one time or another, but this guy meant it! Trilogy also landed on my Top Ten Made for Television Films of the 70s, and this little creature is what got it there.

I'm so excited, you are the FIRST person I have ever encountered that remembers that particular segment on the Trilogy of Terror. I have been walking around with this for about the last 35 years. So terrifying - the only thing that has ever scared me more was Pet Semetary. Thank you for validating my fears!! (Great site by the way.)

HI Katie, thanks so much for stopping by and commenting. I can't believe you've never encountered another person who has been terrified by Zuni! I'm glad I could re-traumatize you! :)