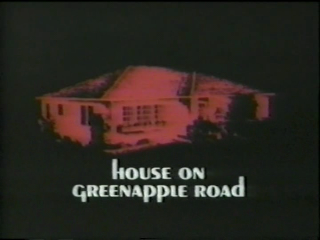 
Anyone who frequents this blog is well aware of my undying love for Christopher George. When I read other’s descriptions of him I often hear the words “dependable” and “reliable” but those simple terms don’t seem to encompass the great talent he possessed. He often brought up the production of a film just by showing up and doing what he does best. Luckily, he didn’t have to do all the work in the excellent cop procedural House on Greenapple Road, but that beautiful face of his is an extremely welcome addition to this unyielding mystery. 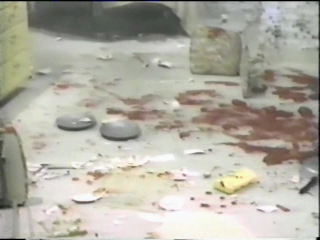 A peek into chaos
As much as I love this man, he’s not the first image that comes to mind when people remember this thriller. House begins with a very young Eve Plumb (Jan on the Brady Bunch) coming home from school. She walks into the house expecting to find her mother but the house is empty. She enters the kitchen and walks past the broken dishes and puddles of blood and heads next door to her aunt’s (Julie Harris). It’s a harrowing segment that sets the scene for a dark look at the life of a missing housewife. 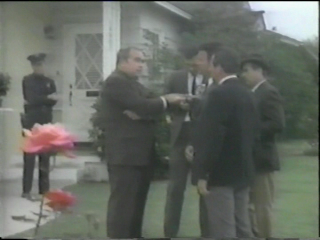 A little beauty amongst the chaos (and I don't mean Ed Asner!)

George is Lt. Dan August, a plain clothes cop with a nose for solving twisted mysteries. Think Sgt. Joe Friday with a touch of (intentional) humor. He is called onto the scene with his steadfast partner, Sergeant Charles Wilentz (Keenan Wynn who is always a pleasure). August is sure there is something more involved to the violent crime scene, but without a corpse he begins his routine investigation by looking for the missing housewife, Marian Ord (Janet Leigh looking divine). Of course, the husband is always the first suspect and the spineless traveling salesman George (Tim O’Connor) does nothing to prove his innocence. August digs deeper and we find that Marian was not the most faithful of wives. August uses several photographs he found hidden in Marian’s dresser to identify several men. Each one writes Marian off as a lonely housewife, but a series of flashbacks reveals that she left quite an impression on them. Also, we find that Marian was desperately seeking some kind of confirmation that she was still a desirable woman and not just an aging mother. She don't take no shit. Don't even ask...
To say House is gripping would be an understatement. The expert cinematography, suspenseful script and A list acting will keep the viewer on the edge of their seat (and guessing) right up to the end. George is fantastic here and even gets to share a small scene with his wife (then still cast as Linda Day without the George). She plays a pot smoking receptionist who doesn’t like to take shit. Even Ed Asner shows up as the befuddled sheriff who unwittingly has one of the biggest clues right at his fingertips. In fact, this movie is all about clues. Everything that is said and done by the supporting players offers a bit of revelation about Marian’s disappearance so keeps your eyes and ears peeled when watching it. 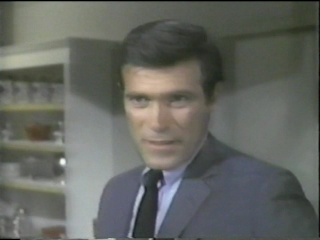 Dan August at your service

The rest of the cast is amazing and I would feel amiss if I didn’t mention that House also features Walter Pidgeon, Julie Harris, William Windom, Peter Mark Richmond (Chrissy Snow’s dad!) and the always likeable Lawrence Dane.

House is a Quinn Martin Production. Martin is most famous for several police procedural television series such as The Fugitive and my personal favorite, The Streets of San Francisco. You won’t find any of the grime here from Streets (arguably one of the grittiest shows of all time), but you will catch Martin's signature top notch writing and themes of the “nothing is what it seems” kind. I would highly recommend anything that has the QM Production logo attached to it. Tim O'Connor in an excellent role

House was so popular it spun off a series called Dan August starring Burt Reynolds (George had prior obligations and couldn't do the series). It ran just one season from 1970-1971 and I have never seen it. But if the movie is any indication of the quality of the series, than this is one show to keep an eye out for.

Email ThisBlogThis!Share to TwitterShare to FacebookShare to Pinterest
Labels: all star cast, made for tv, sexual frustration, stud, suspense, the masters, thriller

I was 12 years when I first saw this on ABC and it left quite an impression. I was a fan of Christopher George because of The Immortal. This and several other ABC movies were very well written and produced. This was pretty strong stuff for network programming at the time. Some of these telemovies (The Man, Brian's Song) ended up in theaters in the Chicago area. House was one of the best.

Unfortunately no episodes of the TV show seem to be on video sites in their proper form (but there is a TV movie cut together from two unrelated episodes, which definitely does not count).

Oh, and I wouldn't recommend QM's last series "A Man Called Sloane," a waste of Robert Conrad and Patrick Williams. Not to mention having the only bad title sequence for a QM show.

I loved this movie and the TV series it spawned. I have not seen it on either VHS or DVD but you can see it on YouTube. No doubt the series would have been renewed for a second season if George had been able to do the part. Another fantastic piece of work for George was The Immortal. It has been recorded to DVD but you will have to google it to find it.

Why isn't this on DVD? It sounds exciting!

If you (the "blogger") are a Superman of Chris George, please help me to understand WHY a very good movie for which he is the "lead," cannot be viewed, rented, purchased, or otherwise. Title: "Tiger by the Tail," 1968 production, 1970 release, EXCELLENT LOCATION FILMING around Ruidoso, New Mexico, when horse racing/betting, etc., was much more popular, likely because there weren't casinos in every community around. A little help, please, blogger? Muchos Daniel!

Does anyone remember the ending
I dont. Driving Me crazy