Thou Shalt Not Commit Adultery (1978) 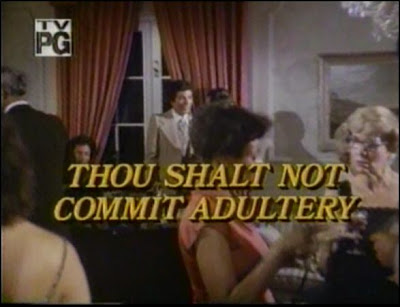 Key parties, free love, polyester and white guys with afros. It was the 70s and it was all good. Well, I can’t say the movie Thou Shalt Not Commit Adultery is all good, but it’s mostly good… well, kinda good… especially when Bert Convy’s lothario is leering at the ladies.

Commit features Louise Fletcher as Sally Kimball, the sort-of-frumpy-sort-of-pretty wife of smokin’ hot Jack (Robert Reed), and boy do these two love each other. During a party at the beginning of the film, Sally gets the leer-on by Bill (Bert Convy) and she stumbles on a young couple making out in the coat room. She’s confused by such immoral acts, but goes along in the world because she couldn’t be happier with the hubby and requisite 2.5 kids. But on their way home from the party they get in a horrible car accident and Jack is paralyzed. A year passes and old Jack is learning to live life with his handicap, but he thinks Sally should go out and spread her wings… and her legs. 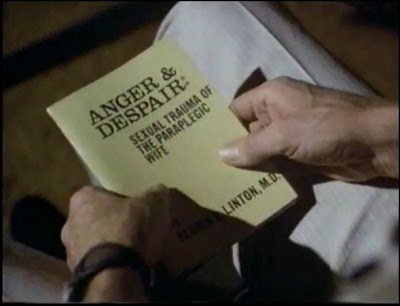 The realization this book doesn't apply to men: 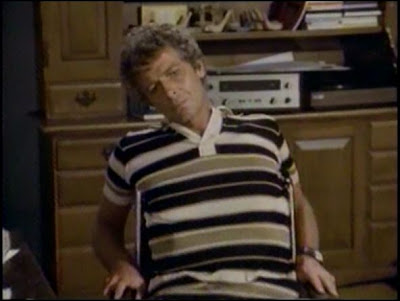 The Kimballs own a golf club business and Jack sends Sally off to California to kiss up to a golf pro with the machismo laden name Vic (Wayne Rogers). However, I hardly doubt he meant for her to literally kiss up to him! But after an endless array of golf conversation, Vic and Sally hit the sheets. He tells her she’s a special kind of beauty (and I agree, all of her dresses have pockets!), and begs her to shack up with him for just one week. She begrudgingly agrees and then heads back home, that much the worse for wear. She tells a kindly stewardess about her situation and the stewardess returns the favor by telling anyone who will listen! How sweet…

Sally is greeted at the airport by Bill who guesses right off the bat that she’s slept with Vic, so he feels extremely comfortable propositioning her. Has Sally learned her lesson or will she take off with gorgeous Bill for one more night of wanton sex? If she’s smart, she’ll go for the meaningless romp! 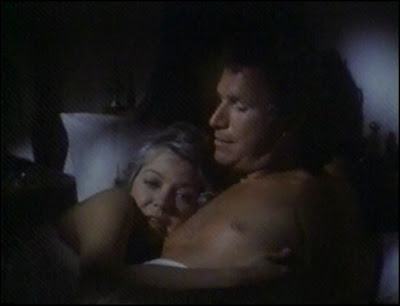 Guess he ended up checking out her putter! **nudge nudge**
It’s fairly obvious that Commit isn’t really sure what message it wants to get across nor does it even seem to know what kind of movie it is. It starts off great, creating a realistic atmosphere of the free lovin’ 70s, but halfway in it veers towards tons of boring golfing scenes. I get that Sally and Vic work in the sport, but man, if I had to hear one more thing about a putter I was going to throw the television out the window! Also, Fletcher seems kind of lost in the part. She’s fairly unemotional about all of it, minus a few tears. And her character is terribly unlikable. She’s painted as a woman willing to forfeit her own wants for her beloved husband, but she ends up coming across as a fairly selfish woman who only seems to be acting under the guise that she’s making the ultimate sacrifice.

Commit was part of a mostly-unrealized series that was supposed to highlight each of the commandments by setting them in a provocative, modern setting. The only other film in the series was called Thou Shalt Not Kill, which was shot around ’78 but not released until ’82. This does not bode well for the series… But at least they got the two best commandments out of the way… 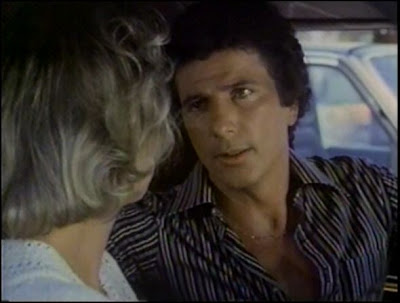 The hottest leering lothario you will ever see

Look at how SPECIFIC that little book is. Geesh! LOL. No wonder he thinks he has to let his wife putter up! Yikes.
Some of these films are just totally kitschy, aren't they? I never felt Louise Fletcher was good at emoting, but then I guess that's why she was so great in all those later horror films as a stern faced woman or something or other.

They can be a bit on the kitsch side of things, yes. This one was more boring than campy but was interesting enough because it was so timely back then. Kind of an interesting idea buried in Fletcher's non-performance! But Bert looks good! :)