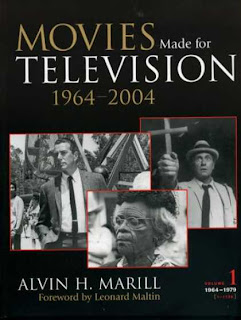 I’m not quite as rabid a reader as I am a TV movie nut, but I do enjoy cutting my teeth on a good book. Or a trashy book. Whichever. But I digress… My love of made for television movies doesn’t just involve trying to find the films, it also involves reading as much as I possibly can on the subject. And believe it or not, there is a vast amount of reading one can do if they look hard enough. I have to admit, I’ve acquired quite the collection of good (and bad) books on the genre, so I thought I’d compile a short list of the books I’ve enjoyed the most. All of the title links will take you Amazon just in case you feel like feeding your obsession!

The ABC Movie of the Week Companion by Michael Karol: Michael’s book is small and there are no photos, but you’ll find awesome factoids. For instance, did you know that the esteemed TVM director Boris Sagal was the father of Katy, Liz and Jean Sagal? Well, I knew that, but that's cuz I’m a nerd. Anyway, there are tons of fun reviews and this is a handy reference book that is great for pure nostalgic entertainment. Plus, it’s ridiculously affordable, how can you say no?

Leonard Maltin’s TV Movies 1985 – 1986: This is an interesting book because it’s not really a review guide just for made for television movies. Rather, it’s a look at all movies that have aired on television, theatrical or otherwise. There are random factoids to be had, like a description of the different versions of Salem’s Lot, which vary in time lengths and overall, it’s a good guide to some movies that have since been forgotten about. 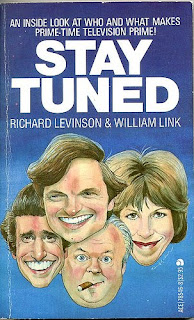 Movies Made for Television by Alvin H. Marill: Quite simply, this is my bible. There are several editions to this book, and you can find ones cheaper than this with fewer years, but you simply must get a copy. This book is essential. It has every TVM and mini-series, with a brief synopsis and some cast and crew info. Besides being the ultimate reference book, the stills are amazing. I often just thumb through the book to see all those wonderful photos.

Stay Tuned: An Inside Look at Making Prime Time Television by Richard Levinson and William Link: Read about the world of television movies as told by the guys who wrote and produced some of the greatest examples of the genre (i.e. Columbo, The Execution of Private Slovik, Rehearsal for Murder). This is as inside a look as anyone can get without going back in time and becoming a writer for TV movies. There’s a lot of information about the process as well as look at the lives of my two favorite TV guys!

TV Party (TV’s Untold Tales) by Billy Ingram: Not so much a book on television movies (although there is scant mention), this is still an essential book for any lover of the genre. You can read about the history of Bette Davis on television as well as look at old time kids shows among many other wonderful topics. It’s simply a must! And don't forget to check out their awesome website, which does have a section dedicated to The Movie of the Week!
Posted by Amanda By Night at 9:45 PM

The Marill book is my bible too!!

I want ALL of these! NOW!

Wow! Awesomely useful list, Amanda. I feel a trip to Amazon on the horizon. Thanks!

Hi all, thanks for the comments.

I hope you guys enjoy the books if you pick any up.

Joanna, I could not live without the Marill book. It's here next to me right now. It's one of my most treasured possessions!

Hey, this looks cool. Does any of these books contain Making of a Male Model? If so, are there any good pictures? LOL.

I will be completely honest, I'm not a super big fan of Deal's book. I have it and it's definitely great for nostalgia in that it's got some good stills and he's not a bad writer, but it's like he got all of his info off of IMDb or something. There's nothing there that's new or that you can't read somewhere else for free. If it was 20 dollars or less, I'd say go for it, but you're better off with the ABC Movie of the Week Companion or Arvin Marill's excellent book (which has no real opinions, it's just synopsis and deets, but it's informative and beautifully laid out... and it has EVERYTHING).

Great blog! The Marill book is my favorite, too! Especially the first edition published in 1980. It only covers made-for-TV movies up to 1979, but the 1970s movies were my favorite era anyway. The best part is that it is lavishly illustrated with dozens and dozens of rare still photos. And they're large photos, and nicely reproduced, too. The later editions of the book didn't have as many photos as the first because the author had to cover movies of the 1980s and 1990s, so he had to make room for more text. I recommend the first edition to anyone if you can find it. Ron

Awesome reference material but I'm confused about the Marill book. Is it supposed to be _literally_ every TV movie ever made (or made within the parameters of each ed.)? I checked out the 1964-1984 book to see if it included the more obscure titles of the 70s TVM boom but surprisingly _most_ of the ones I looked for were MIA.

As far as I know, yes, it's every movie... Not the Larry Buchanan films, as I think those did not get a TV release. And it wouldn't have the ABC Wide Word Mystery films because it only covered prime time (in the beginning, I believe later editions had some romance films that aired on Sunday afternoons on CBS). The Wide World Mystery films have proven tough to really write about, or even watch. I'm assuming those are what you meant. In short, if it was produced for TV and then actually aired in prime time, it SHOULD be in Marril (I have found errors but so far the title seem to be fairly complete).