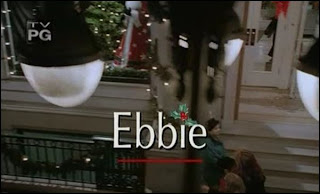 Although ABC co-produced this gender-bend twist on A Christmas Carol, it’s a Lifetime original and let’s face it, it’s Lifetime all the way! Susan Lucci is Elizabeth Scrooge, aka Ebbie and she’s one of those humorless (but gorgeous) department store presidents that is all business and no heart. After the death of her partner in crime Jake (Jeffrey DuMunn), she seems even colder and more callous, especially during the holidays. Then, one night as she’s alone in her lush apartment, Jake comes to visit her... as a ghost... You know the drill… three more ghosts will show up and whatnot. What struck me about Ebbie is how true to the Dickens classic it is. I just read A Christmas Carol and watched the George C. Scott adaptation, as well as A Muppet Christmas Carol and Scrooged. Except for the Scott version which is almost a completely faithful adaptation, most films based on this story tend to create something fairly unique. Ebbie is in many ways completely different from the story, even if you just look at the gender of the protagonist. However, although it’s got a woman Scrooge and is told in a modern setting, the story itself is quite faithful. The sister’s death is particularly effective here, even compared to the Scott version, perhaps that's due to the modern setting. We actually watch the sister die, so it’s easy to see where Ebbie begins to close herself off. The screenwriters Paul Redford and Ed Redlich took great pains to show Ebbie’s transformation from a wide-eyed kid to a cold-hearted adult, but the film’s biggest disappointment comes when she finds redemption. It’s not as joyous as the story and ends up falling short. 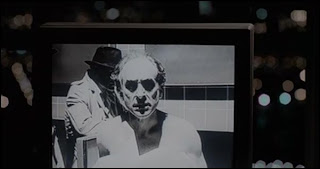 Jacob Marley hits the airwaves
I don’t think I saw this movie when it originally aired but I recall watching it on Lifetime in the late 90s. What I remembered though was that Ebbie was a little funny. And it’s not funny at all. I mean, not even one bit. Perhaps that’s what was really missing. A female Scrooge in modern times should be funny ala A Diva’s Christmas Carol, and maybe that’s what the Diva film was trying to do, add some levity to an interesting twist… I dunno. I won’t even try to guess why filmmakers choose the route they do, but it is interesting and maybe I should have viewed Ebbie and Diva together. Hmmm, well there’s always next year!

The ageless Susan Lucci is great in the role and overall, I’m a fan of Ebbie, mostly because of Lucci’s performance. She manages to evoke sympathy even when she’s being relentless in the boardroom or in love. In short, she tugs at ye olde heartstrings, and what else can one ask for when watching a Lifetime Christmas movie? 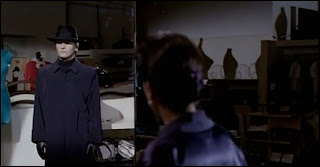 This Ghost of Christmas Future doubles as a department store detective!
Posted by Amanda By Night at 11:23 AM

I quite like this one! Two different friends of mine kept on (independently) telling me about it for years, to the point that I became desperate to see it... Of course, it couldn't *quite* live up to that level of expectation when I eventually tracked it down, but I certainly enjoyed it.

This year's Christmas TV movie for me was "Christmas Mail"... Again, a guilty pleasure :-)

Oh I have not seen Christmas Mail, but I think I'd like Christmas MALE a bit better! :)