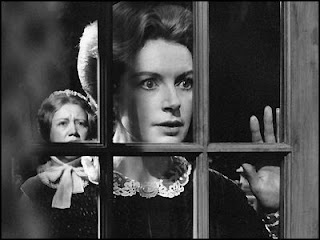 You can read the critical comparison paper I wrote on The Innocents for my Film and Lit class over at Fangirtastic!

The Assignment: Find two differing critical essays on one film or book and compare and contrast their arguments.

The essays reviewed: One discusses the ghost and a conspiracy theory and the other argues that The Innocents is a metaphor for the confused role of the female in early 60s! Wow!

I won't know until the end of the month. But I am so thrilled it found a home online. Makes me look like an academic and stuff!
Posted by Amanda By Night at 7:07 PM

And you even give a Works Cited list... you know the way to this librarian's heart! Excellent work Amanda!

I think I got an A! I got an A in the class but since it was the end of the semester I didn't get the paper back... I am OBSESSED with this movie now! Academia does that to a girl!