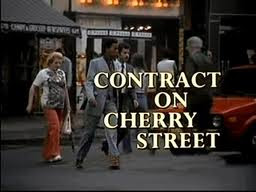 I admit it, I have not been over to visit the Warner Archives vault for awhile. It seemed like they hadn't updated it for some time, and I was wondering if they'd be adding anything interesting. Looks like they did! YAY!

Contract on Cherry Street is something I've been wanting to see for some time. In a clever bit of casting this 1977 TVM, which originally aired on NBC, features Frank Sinatra as a cop taking on the mob! Ha! Get it? He was in his early 60s at this point and still putting in some badass moves! Anyone who caught Sinatra as the take-no-prisoners-cop in the 1987 episode of Magnum P.I. titled Laura, (which is also Sinatra's last role), you know if he could do it in the late 80s, then he must have been a force in the 70s! I am excited to see this movie finally made it to DVD!

Warner Archives also released Detour to Terror. I'll just give you the synopsis from IMDb:

"A homicidal dune-buggy trio terrorizes a busload of Las Vegas bound tourists with the intent to kidnap one of them."

This 1980 thriller which originally aired in 1980 on NBC stars O.J. Simpson, Anne Francis, Arte Johnson and Lorenzo Lamas! Holy-schmolie!. I must see this!

Thank you Warner Archives!
Posted by Amanda By Night at 8:18 PM

We just mentioned CONTRACT ON CHERRY STREET to a friend not two days ago! Didn't know it had been released by the Warner Archives. Sinatra really wanted Philip D'Antoni to helm this movie, but the Oscar winning producer and one-time director (THE SEVEN-UPS) ultimately turned down the offer and quietly retired from moviemaking.

I remember watching that on HBO as a kid . . . are we sure it was strictly a TV movie?