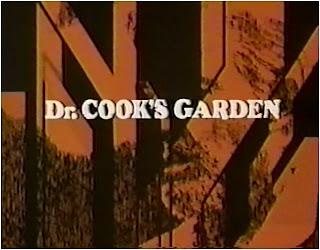 Considering how haphazard many critics felt the original play of Dr. Cook’s Garden was, it still finds its way onto many a small stage and was immortalized in the 1971 TV movie adaptation, which plays up the good doctor’s questionable ethics inside of the suspense blueprint. The play was written by Ira Levin who is better known for his incredible novels which have been made into several films, such as Rosemary’s Baby. Garden is often compared as a combination of Levin’s Stepford Wives and his play Deathtrap, but when it was destined to become a Broadway flop, most people saw it as a convoluted and superficial thriller, and it closed before the end of its opening week. The director, George C. Scott was reportedly having artistic differences with… someone, and many others pin its failure on the casting of Burl Ives as Dr. Cook. Since I haven’t read the play, I can’t say how much was changed for the television adaptation (written by Art Wallace), but the themes of narcissistic morality and creating utopia through murder translate rather well on the small screen. Ives is replaced by Bing Crosby in what would be his last film, and I do say he’s perfectly cast. Having recently read his son’s excellent “tell-all” biography, Going My Own Way, I have that darker side of Bing planted firmly in my brain, so the jump from family entertainer to cold-blooded killer seemed like a fairly smooth transition! 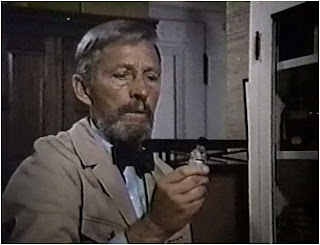 No one in my town gets corns and lives to tell about it!
Dr. Cook lives in small town heaven, where there’s no crime, or even disease. In fact, no one suffers any disabilities at all! You’d be hard pressed to find as much as a limping local. A young doctor named Jimmy Tennyson (Frank Converse plays him in the movie, Kier Dullea portrayed him on Broadway), who grew up in this small paradise, returns to help Dr. Cook with the business. The good doctor doesn’t really want him around, and we soon find out why. Seems Cook’s Hippocratic Oath only applies if he likes you. And even then you are still in danger, if you find yourself really sick. He keeps his small town clean and pure much like the way he weeds his garden, deciding who gets to stay who gets poisoned!

There are plenty of interesting themes here, and although this ABC Movie of the Week is played more as a straight thriller rather than thought provoking drama, it’s impossible not to think about the whole “Playing God” motif and the moral obligations attached to people in a position of power. Bing Crosby does a great job and it was such a nice choice for him, exploring those dark recesses in a way that allows the audience to look at the film’s deeper themes without feeling overwhelmed by ethics. I guess when your movie only lasts 74 minutes; it’s good to keep it brisk! 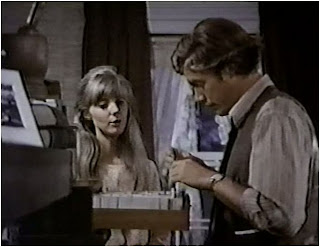 The answer to the doctor's secret lies in the Dewey Decimal System
Frank Converse was always a treat to watch on television. He has such a presence... and that voice… Mmmmmm… He was one of my favorite faces to see when I was growing up. Blythe Danner is really young and quite good as the sweet natured nurse. But in the end, this is Crosby’s movie all the way. It was a wild choice of a swan song, but it looks like he was testing the dark waters, Bing Crosby Productions produced Willard and a few other horror movies in the early 70s.

Also, if you just have to know everything about Dr. Cook's Garden, check out this exhaustive guide to the play.

Who knew Frank had such a beatnik heart:

Once again, you've whetted my appetite, Amanda. I'm going to seek this one out a.s.a.p. Fantastic write-up, as always!

Once again I have to pick your brain---do you remember a TV movie (probably mid-to-late 80s) about a doctor with an old pet doberman... he creates 3 puppy dobermans by cloning the older dog in an experiment. Well that was just a warm-up...his big plan is to now clone his aging wife! That's all I remember and I'm having lousy luck trying to find out anything more. Does it ring a bell?

Bill, that sounds like EMBRYO with Rock Hudson and Barbara Carrera.

You know all I remember about Embryo is that big dog eating the little dog, so you could be right. I totally forgot about that film!

I've looked up reviews of this, and it sounds to be *really* good. However, I haven't found it on either Netflix nor on Amazon.

How did you get ahold of it?

Thanks Propagatrix! That is definitely it, and its available streaming on YouTube and Amazon. Amazon also sells the DVD. Hey, Diane Ladd and Roddy McDowell are in this this thing too!

This sounds awesome, I'll have to find it too. Great review.